Hanley: Quakes' midfield could do damage against Chivas

Share All sharing options for: Hanley: Quakes' midfield could do damage against Chivas 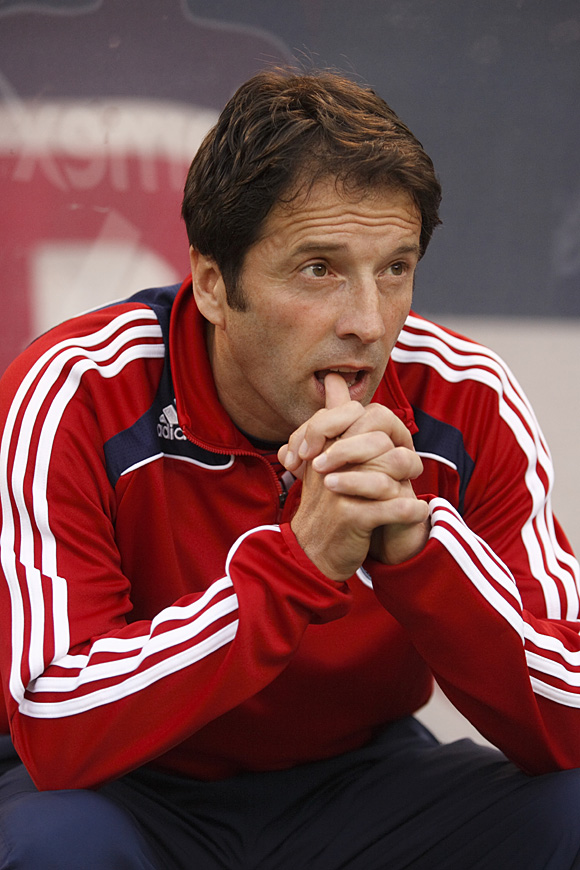 Despite a variety of injuries and other setbacks, Preki's Chivas USA has a record of 11-10-6, good enough for a firm grip on second place in the Western Conference. Photo: Howard C. Smith, isiphotos.com.

Preki should win this year's MLS Coach of the Year award.  He won't — Sigi Schmid will — but Preki deserves the accolade.   What he has done this season is miraculous.   Injuries, international call ups, and even losing starting keeper Brad Guzan to England has required changes to the starting line up in every match. At one point, with Bobby Burling and Daniel Paladini, he was starting two guys cast off from the weak Galaxy squad of '07.

Chivas has won three in a row and five out of their last six matches.  These are wins, mind you, this is not an 'unbeaten' streak. Somehow, without whining about the schedule, loss of players, and so forth, Preki has manged to keep his club in the hunt.   I thought he could have lost this team the last time I wrote about them as there was a sense of unhappy players and some disarray.  Those unhappy guys are sitting on the pine at the moment and their now healthy replacements have done very well. With everyone nearly out of the infirmary-Preki actually has choices.  Chivas at the moment is a real contender and is probably the only team that will challenge Houston in the playoffs.

Here's what I think we'll see.  Dan Kennedy in goals, fronted by Claudio Suarez and either Jim Curtin or Bobby Burling (Shavar Thomas is with Jamaica for their World Cup qualifier), with Alex Zotinca and Jonathan Bornstein the wide defenders.  In the middle of the park , Jesse Marsch will hold down the fort — possibly in a tandem with Paulo Nagamura — with Francisco Mendoza wide on the left and Sasha Victorine opposite.  Sacha Kljestan, fortunately for San Jose, has been called in for the US/Cuba qualifier.  Up top, Alecko Eskandarian and newly signed Brasilian, Dejair. (I wonder what his real name is?)

I first saw goalkeeper Dan Kennedy during his younger days playing for the Irvine Strikers but more importantly, at UCSB when scouting an early round NCAA tourney match for the San Jose Earthquakes.  I was there primarily to watch Rob Friend, the big Canadian center forward, but remember Dan for his ridiculous last minute foul in the opponent's box.  With the scored tied at one and the seconds ticking away, the match seemingly destined for overtime, he came up for a corner and proceeded to run right at and into the opposing keeper.  After a yellow card and a quick dash back into his box, the match did go into overtime and his Gauchos pulled out a win.  I couldn't help but think what a stupid thing to do.  What if he was red carded? His team would have had to play the resulting overtime a man down potentially costing them, as it turned out, a trip to the NCAA final against Indiana.  I would like to think that the time he has spent in the A-League as well as in Chile has allowed him to time to mature.  He, along with centre back Claudio Suarez, are the weak links in the Chivas side.  Dan is listed as 6-1 but he is not that tall.  I could hear his commands against New England and he sounded like a rookie, somewhat intimidated by the atmosphere.  Kennedy is capable, though, in a Zach Wells kind of way — who unfairly lost his starting position at DC United to a weak keeper in Louis Crayton.

The Chivas backline with Suarez and or Curtin/Burling can be exploited.  All three are tall and, to some extent, wooden.  Run at them!  The wide guys in Zotinca and Bornstein are pretty good by MLS standards.  Zotinca doesn't mind kicking someone and Bornstein drifts forward, usually losing the ball with an errant pass.  With Mendoza in front of him I would think he stays at home a bit more.

Mendoza was one of the players that I felt was disinterested a few months ago, playing as if he didn't want to be here.  I think that has changed a bit and he is always a danger when playing in his favored wide midfield spot.  Jesse Marsch we know about.  He'll hold the middle and if he has to do it alone, great.   Jesse does not have the range to cover the ground so run off him.

Preki has to make some choices here.  Does he slide Victorine inside, straight up for Klejstan, and push Attiba harris wide on the right?  Or does he keep Victorine wide and put Nagamura inside, holding with Marsch?  If we see Nagamura then Preki has gone with a conservative 4-4-2 with the middle flat. This hurts Chivas in a possession sense as neither Marsch or Nagamura pass the ball well in attack.  If  Preki is concerned about the wide play of San Jose does he put Attiba Harris out there to manage Darren Huckerby? Or maybe he likes the thought of Harris running at San Jose's Denton.  Tough decisions but I am sure coach Preki is glad to have the choices.

Up top, Alecko Eskadarian is in form.  After being away for what seems like forever he is back on the pitch and showing why, in what seems a short career, he has bagged his share of goals.  The thing is, when Alecko shoots he finds the target.  He'll get three or four shots a game and three of those four will be on target.  Alecko makes good runs, so opponents need to keep an eye on him for 90 or pay the price.

One of my favorite things is watching strikers work.  Clint Mathis the other night at Buck Shaw didn't seem to be that effective, but if you watch his movement he was very good.  Always spinning, checking, and then looking to get behind the defense.  While he may not have received the ball as often, he opened up lanes for Yura Movsisyan.  Eskandarian is like that — he will look to exploit and capitalize on his opponents' movements or positioning.  His strike partner will likely be Dejair because, while Razov may be healthy, the Brasilian notched a goal and an assist against DC United last week.  Coming off the bench we might see both Razov and Maykel Galindo or the youngster Justin Braun.  Sadly, both Razov and Galindo represent a strike pair that is arguably better than the Earthquakes' starting front runners.

Chivas, like most Mexican sides, prides itself on possession and tend to play through the middle more than the flanks.  This Chivas side is not a Mexican team, however.  Suarez and Mendoza are the only Mexicans, a far cry from their first year expansion team. This means Chivas USA is like any other MLS side:  Preki will get his best eleven on the field and look to play to their strengths.  With the absence of Kljestan, Chivas will look to play "in to out" — meaning find feet, whether that's Alecko, Victorine, or Dejair, and then find a wide guy.  If Mendoza receives the ball he will run at the defense, looking to combine with a forward or possibly fall down near the eighteen! Eskandarian and Dejair will then argue over who hits the free kick.  Dejair, the Brazilian, will feel entitled — he's from Brazil, you know.  Jonathan Bornstein, in what I consider delusions of grandeur, will try and overlap at every opportunity.  He can sometimes be effective.  Usually isn't, but once can be enough if it results in his cross that leads to a goal.

What's compelling about this match? The middle of the park could represent plenty of space for someone to make a real impact.  San Jose, with some quality in the middle, could really do some damage.  Chivas expects the Earthquakes to work the flanks and will take measures to slow down this component.  If the Quakes can draw the attention inside, this might allow for quality chances that can come from combinations through Arturo Alvarez and Scott Sealy.  The ball must move quickly, however, as dawdling will no doubt lead to a thumping — although the resulting free kick could prove a match decider.

My keys for a result:
Possession — If the ball keeps going to the opposition, it is only a matter of time before you're punished.
Shape —  Attack with four, defend with six. Always.
Set Pieces — Chivas gives away corners; don't waste them.
Pay attention to Eskandarian and co. for the full 90 minutes.
Match them physically.  There will be some studs flying around — be ready for it.