Hanley: Dynamo will push for a win against Quakes

Share All sharing options for: Hanley: Dynamo will push for a win against Quakes 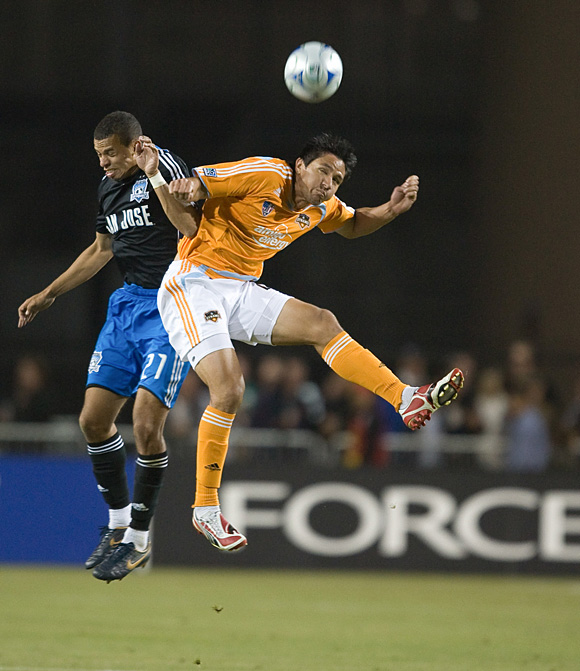 The table is set. Perfect timing.  Houston has qualified for the playoffs, played a ton of games this year.  They deserve a rest.  Time for the Dynamo guys to take it easy.  Stroll through a few matches, rest up.  Right? Um no, wrong.  Here's a little dose of reality,  The Houston Dynamo don't like to lose.  For those readers that believe I gush too much about the Dynamo, I make no apologies.  Some will remember an earlier column where I also gushed and said, if Sigi Schimdt can keep his team together and on track, we could be looking at an MLS Cup finalist in the Crew.  I know good teams and players, and the Dynamo are a very good side that also possess an extraordinary amount of pride.
Here's what I think we'll see from Houston: Pat Onstad in nets with Bobby Boswell and Eddie Robinson in front of him.   Richard Mulrooney at right back and Wade Barrett at left back.  In the middle of the park, Ricardo Clark holding, flanked by Brad Davis and Brian Mullan with Dwayne De Rosario the attacking midfielder.  Up top, Brian Ching and Nate Jacqua.  If Ching really needs a rest after his US national team duties, and coach Dominic Kinnear can convince him that he does, we might see Dwayne go up top with Stuart Holden sliding into the attacking midfielder's role.  Coach Kinnear's options also include strikers Kei Kamara and Chris Wondolowski and midfielders Corey Ashe and Geoff Cameron.

Houston's back four/five are perhaps the best in the league.  Pat Onstad tends to start the season and end the season playing a little tentatively, and yet always manages to be in precisely the right spot at the absolute most critical time.  His game management is excellent and distribution correct — one always knows what to expect with Pat.  Boswell and Robinson compliment each other well, Eddie being the athletic cover when needed.   Most people don't realize how fast Eddie Robinson is, but trust me on this one — he is very quick.  Mulrooney and Barrett are good backs although I have seen Wade surprised once or twice this season with players getting around or behind him at crucial times.

If the soccer experts are correct in their old adage, 'the game is won in the midfield,' then we have some insight as to the success of the Houston Dynamo.  These guys have been the best since 2005.  How many MLS teams have had their midfield players together 3 years running, let alone one that only lost 4 matches in their initial collaboration and went on to gather a bunch of silverware?  San Jose has maybe one or possibly two players that could start for Houston.  If Darren Huckerby is one, who does he displace?  Brad Davis? Brian Mullan? Stuart Holden? Tough call, I think.  That's how good the Dynamo midfield is.

Dwayne De Rosario, the "converted" forward, still plays like one — he just has a deeper starting point.  Loves the ball, loves to dribble at defenders looking to combine and or shoot.  Rico Clark does the dirty work behind him, always available to collect the ball and push it wide or occasionally straight up the floor to a striker.  Rico has good range, better than his US national team counterpart Michael Bradley. In Rico's case, he doesn't get enough looks with the US because he is not always good in practice.  It's kind of an odd thing and it took Dominic Kinnear and I a while to realize this.  Some will recall that Rico was on the bench early in the '05 Quake season, with Danny O'Rourke getting the nod at defensive midfielder. Rico then played at right back a few times, did great, and we realized he was a "gamer."  When O'Rourke really struggled against L.A. about eight games into the season,  we made the switch at halftime, and never looked back.

In Brad Davis, Houston balances the side out so to speak.  He doesn't get forward often, picks and chooses when to go as he is not out there for his wheels.  Brad is out there because of his left foot.  His crosses and direct play are superb. Brian Mullan, affectionately called "Mulls," is the tireless worker, never stopping, always nipping at the heels of defenders, willing to get stuck in if needed.  I think most MLS defenders dread playing against him.  They just know it will be a long night.  And if Brian does get subbed out he's replaced by lightning quick Corey Ashe, making it a really long night!

The other sub is Geoff Cameron (unless Holden doesn't start), and this kid will probably be around a while.  Dominic Kinnear doesn't keep next year's cuts. In other words, he doesn't sign a player with the thought that, "oh well — if he doesn't work out we can just waive him."  Cameron has good size and acquits himself well on the pitch.  He has made 20 appearances this season, both up top and in midfield.  Might have played center back once or twice as well.

Up top, we usually see the twin towers in Ching and Jacqua.  Brian does a very effective job of holding the ball up, even in tight spaces.  He "buys the real estate," I like to say.  He keeps sort of smashing his way in,  opening up space for Dwayne and company.   Nate likes to run with the ball a bit more, sometimes too much, giving it away carelessly.  Both are very good in the air and receive quality service from Mullan and at times perfect service from Davis.

If we see Kamara, he seems to be a lesser version of the other two except I don't think he does anything well.  He doesn't hold the ball up well, doesn't dribble well, and heck, he doesn't even shoot well.  So he'll probably be this season's version of Joseph Ngwenya and end up scoring a game winner and then head off to AC Milan or something, proving me utterly useless at my stated, "I know good players" speech.

For the Earthquakes to have some success at Robertson Stadium Wednesday evening, they'll have to be good when they don't have the ball.  The Dynamo like to dictate the tempo, move the ball around. They have their own style or collective vision of how the game will be played.  In to out, wide, crash the box, or up, back, and through. When possession is lost, the Dynamo get back immediately and regroup — they know how to keep their shape.

If San Jose can sit in and pick a line to pressure, maybe just in the Houston end a few yards over the half mark, they may find success if, when the Quakes go, they all go as a unit.  Robertson is small in a Spartan Stadium way so all the second balls must be won.  Asking the Earthquakes to possess the ball would be fruitless.  The horses don't have the capability, better to play with what you have and when direct play is on, go for it.

Kinnear, like Preki, will key on Huckerby.  Preki pushed Jonathan Bornstein to the right side primarily to stand in the passing channel to Darren.  If you watched Bornstein Saturday night, he kept turning around to look at Huckerby and then adjust his position, sliding over in front of any direct passing lanes.  Houston will also pressure to push the ball to Riley or Hernandez as neither pass the ball well.  If Houston has a weakness it is their relentless attacking attitude.  It might not be fair to say overconfident — it's more like they struggle putting the brakes on sometimes.

My keys for a result:
Sit in — keep your shape and look to counter
Set pieces for and against will probably prove the decider
This will be a physical match, there is no love lost here
Patience — one pass over the top, one goal might be all it takes.