Share All sharing options for: Wolff to seek intimate setting at new stadium 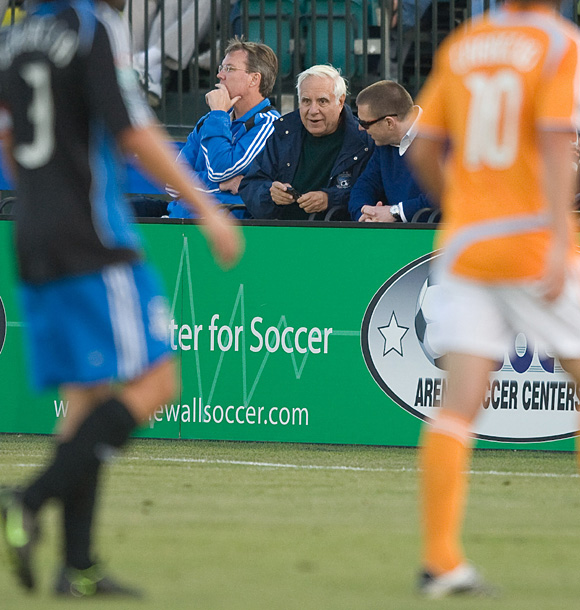 Earthquakes owner Lew Wolff, center, is making plans for a stadium that puts fans "as close to the action as possible." Photo: John Todd, centerlinesoccer.com, isiphotos.com.

Earthquakes owner Lew Wolff was in attendance at Thursday's press conference announcing the new partnership between San Jose and the English Premier League's Tottenham Hotspur. Center Line Soccer's Jay Hipps had a chance to talk to Wolff about the progress being made towards building a new stadium for the team in San Jose.

CLS: What is the status of the stadium project at this point?

LW: We're looking at the design aspects of it right now. With the change in the economy, we're looking at Plan A or B, I don't know what to call it anymore. Really, I think we're on schedule in that we want to select our architect in the next month, start our drawings, and then determine exactly how we're going to fund it.

We may not use the original approach that we thought, which had to do with residential housing. We still need that, but we'll use that more as a backstop. We have to be as flexible with the economy as others. At the same time, we haven't had any reason to delay what we're doing. In other words, the process that we're in the middle of is something that the economy doesn't really change.

CLS: So the capital markets are not an issue for you at this point?

LW: Well, they're an issue for me, but they're not an issue for the soccer or the baseball stadiums! (laughs) But I don't want to gloss over them, either, they're important.

I think we've always had an eye on, even before the debacle that we're facing right now, we've always had a look at maybe making the stadium maybe smaller rather than larger and more fan-oriented than luxury box-holder oriented, things of that nature. That's been in our genetic oeuvre for the last couple of years, so it isn't new to us.

CLS: So, would that be a case of building something smaller with the potential to expand it?

LW: You know, all developers say, "Don't worry — we'll add on." We're building it, it would be nice to have that luxury, but I don't see it happen very often, so what we're trying to do is the best we can — we don't want to sacrifice something for the future of a physical nature. We want to have the best we can when we build it. We don't want to lose anything because we're thinking about adding something later. So what you'll see is what you're going to get.

CLS: So when you say smaller, are you talking about a certain capacity?

LW: Yes. Capacity. If we don't have a raft of luxury boxes in the soccer (stadium) — I personally don't see the need for them. Sometimes for financing, but I still don't see the need. I think the need is to satisfy families and to be as close to the action as possible, so the less walk up to the top — we're talking about this every day. The intimacy is what we're trying to create, both for baseball and for soccer.