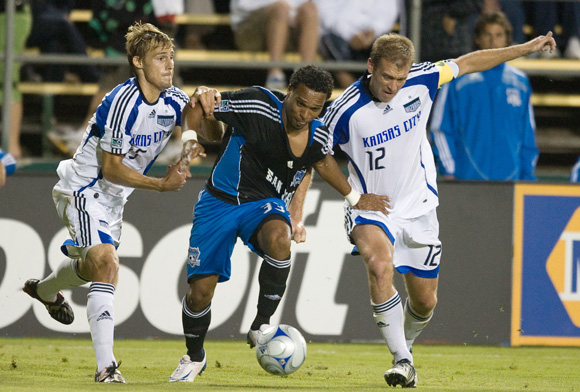 The Earthquakes will need to break down KC's defense. Photo by John Todd/isiphotos.com/centerlinesoccer.com.

As a player and right before I moved to Tampa for a stint with the Rowdies, I had the maravilhoso (my mom's Portuguese) opportunity to go on tour with the Los Angeles Aztecs, who, like the Rowdies, were part of the North American Soccer League. Maravilhoso or wonderful because the Aztecs' manager was Rinus Michels, perhaps the finest coach soccer has ever seen.

Rinus created "Total Football" with his early 70's Ajax Amsterdam sides and continued with the 1974 and 1978 Dutch national teams that represented the Netherlands in two World Cup finals and were affectionately christened, by some, "Clockwork Orange." I'll save my expounding on Rinus's esplendido (splendid; this concludes your Portuguese lesson for the day) coaching philosophy for another time and place, but brought him into this column because of a mantra he repeated often to his charges: "You are paid to win."

It's as simple as that. Players are not paid to entertain, write columns, do radio shows, clinics and appearances. At the end of the day it is winners that we desire, winners that we yearn to be part of, associated with. Managers create the environment that allows for players to become winners that collectively become Champions. In my pieces here, it is not my role to critique the Earthquakes and there is enough data floating around to satisfy most supporters on this site alone, so I'll continue to try and allow for insight into San Jose's opponents, in this case the Kansas City Wizards.

Wizards chief Curt Onalfo cannot effectively manage players with personalities that don't match his own, and relatively new idea, of what a team guy should look and act like. Eddie Johnson, Yura Movisisyan, Jose Burciaga, and now Carlos Marineili and Claudio Lopez. They're all gone or on the bench.

There seems to be a disconnect in Wizards management. Whether it comes from above in Peter Vermes, who has publicly stated , and I am paraphrasing, that while Curt has done some things well, he has also done poorly in some areas but is relatively young in his coaching career and is still learning. What? Peter goes on to state that the Wizards brought in Claudio Lopez as a Designated Player to show that foreign stars can look to Kansas City as an alternative to New York and Los Angeles. What?

Peter Vermes needs to look to the 2000 MLS Cup winning side that he was part of and espouse those qualities to his coach and current side. The Wizards in 2000 were considered by many to be boring, a defensive side that lacked imagination. I tend to disagree. They had Meola, Preki, Mo Johnston, Chris Henderson, Peter Vermes, Chris Klein, Kerry Zavagnin, and Cup hero Miklos Molnar. The team played to their strengths and reflect clearly the formula for success in this league: hard working, blue collar guys with a modicum of skill, sprinkled with talent — all of whom clearly understand that their livelihood depends on winning.

Let's take a look at Kansas City. Hartman in nets fronted by Jimmy Conrad and Tyson Wahl. Defending the flanks, we should see Leathers and Harrington. In midfield, Jack Jewsbury, Davy Arnaud, Herc Gomez, Kevin Souter and Josh Wolff joining Abe Thompson up top. This is the line up that defeated New England 1-0 in the Wizards' last match. After so many line up changes during the season, a season that has seen Kansas City go from first to worst, and then creep back up again to fight for a playoff spot, I can't imagine a coach would mess with his success against the Revolution.

Hartman has been around, and as I said earlier this year, he won't be surprised by anything. Still, shoot early and often and most importantly, he will struggle with balls in the air. In Harrington and Leathers (when he tackles someone do people say, "man that guy got leathered?") (sorry), we have two youngsters assisted by the overdrawn Conrad and the sort of veteran Tyson Wahl. I think the idea here is to have athletic cover for the inside guys that provide the sage advice. Quotes from Conrad and Hartman after the NE match indicate that they feel very good about the shutout, they collectively have ten now.

In midfield Kansas City now has two workers in Arnaud and Jewsbury. They are both competent if not considered by many to be very good MLS caliber players. The young Scot Souter I know nothing about and have not see him play. He has started the last two matches. I know a little about Herc Gomez. If Herc does not produce in this run in to the playoffs, I wonder if he will be around next year. He can be a bit moody, erratic on the field, poor in training and yet smash a ball into the net from a mile away. He doesn't defend well so we could see some gaps if he plays wide.

Up top Josh Wolff has always been a tidy player — strong and athletic with a good amount of skill — but one has to wonder if he has lost a step and can ever really contribute significantly again. Maybe his role in the future is one of a "super sub." Abe Thompson was a curious acquisition as he doesn't really do anything that Scott Sealy couldn't provide.

These matches are kind of dangerous in that everyone involved is out to impress. Whether it's for the team (Kansas City's quest for the playoffs) or for a shot at next year's roster (Earthquakes), players are flying around. Keeping composure and having patience is critical here. Kansas City struggles in the attacking third so shape is crucial.

For San Jose to have success in Kansas City, the land of Oz and newly acquired foreign star soccer players, the Earthquakes need to work hard for each other.

The Wizards will press the match, seeking the show they can be dangerous in front of an opponent's goal. After all, when Curt Onalfo was hired he said he would bring an attacking style to the team. Shape is more than vital. Sit a little and take the steam out of the Wizards by winning your battles, stringing some passes together and then send one over the top, scaring the heck out of them to keep 'em honest.

No visible signs of frustration or petulant behavior. Everyone is part of it, taking responsibility for the match and the season. When Darren Huckerby first came on board I wrote that it appears he is enjoying his football,. The team as a whole needs to get back to that. I didn't see it against Houston and there was no joy against Chivas. I am not preaching "go have fun," but rather, "angry players play poorly." Winners and winning teams are always smiling, and after all wouldn't it be nice to be paid to win?

My keys to a result:
See my last column, or the one before that one.