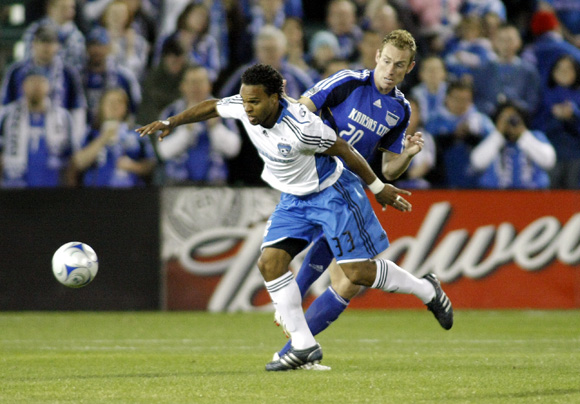 Scott Sealy battles with Tyson Wahl during a 3-2 loss in KC. Photo by Bill Barrett/isiphotos.com

(Kansas City, KS) – For the second time this week the San Jose Earthquakes conceded an injury time goal that cost them the game as Hercules Gomez scored in the 93rd minute to lift the Kansas City Wizards to a 3-2 win Saturday night.

A Claudio Lopez corner kick dropped to an onrushing Gomez eight yards in front of goal, and Gomez hit it first time. Joe Cannon could only watch as the shot flew inside the right post and hit the back of the net mere seconds before the final whistle.

“In the last two games, we’ve given up game-winning goals to the opposition, which you can’t do at any level,” San Jose coach Frank Yallop said. “We’re trying to win the match, obviously, but set plays with everybody back, you shouldn’t be conceding goals like that.”

The loss, coming on the heels of a last second loss in Houston Wednesday, mathematically eliminates expansion San Jose from the playoff race. Yallop said, “It’s heartbreaking for us to turn full circle from what we did five weeks ago."

Kansas City came into the game holding the last wildcard playoff spot, tied for fifth place in the MLS East with New York with 36 points, but with the tie-breaker edge thanks to a win and a tie against the Red Bulls this year.

With one eye on the scoreboard, where New York was beating Columbus, 3-1, the Wizards pushed the action through the game, out shooting the Earthquakes 23-7.

San Jose began the game with a slightly different look, with Arturo Alvarez taking Ronnie O’Brien’s place in midfield, making room for Ryan Johnson at forward, while James Riley got a second straight start in what had been Ned Grabavoy’s spot.

In the cramped confines of CommunityAmerica Ballpark, the defensive lapses that have cost the ‘Quakes so dearly in the past month were on display again early. In the fourth minute, a long ball out of the back skipped past the San Jose backline, springing Claudio Lopez in alone on goal. But Lopez’s first touch was a bit strong, and Joe Cannon came 15 yards out of goal to snuff out the scoring opportunity.

Kansas City continued to look dangerous early, and the Wizards finally broke through in the 18th minute. Claudio Lopez played the ball to Abe Thompson on the left wing, then made a looping run through the San Jose defense. Thompson’s return chip reached Lopez at the six yard box, where he stretched to flick a volley past Cannon for a 1-0 Wizards lead.

Two minutes later, San Jose tied the score when Scott Sealy banged in a goal against his old teammates. Arturo Alvarez whipped in a curving ball from the right wing that found Sealy at the six yard box, and his header beat Kevin Hartman cleanly inside the left post.

But Kansas City controlled the run of play in the first half, and the Wizards struck again in the 27th minute. From a deep midfield position, Jack Jewsberry rolled a pass forward to Lopez, who’s one touch flick-on found Davy Arnaud bursting into the box past a flat footed San Jose defense. From 15 yards out, Arnaud made no mistake, scoring his sixth goal of the year to put KC on top 2-1.

Ivan Trujillo replaced Abe Thompson in the Kansas City lineup to start the second half, and he promptly missed two golden chances to put the Wizards further ahead. A minute into the period, Claudio Lopez came down the left wing and centered the ball for an open Trujillo, but he missed badly, wide right from 12 yards out.

In the 60th minute, again it was Lopez down the left wing, centering for Trujillo at the penalty spot. This time, Trujillo tapped a weak shot that Joe Cannon easily saved.

It looked like those missed opportunities would cost Kansas City dearly when San Jose fought back to tie the game. The Earthquakes almost scored in the 66th minute, when Jason Hernandez found Scott Sealy at the top of the arc, and Sealy first-timed it to Ryan Johnson racing into the penalty area, but Kevin Hartman came out to make a quick kick save.

In the 71st minute, San Jose got their second goal when Kevin Hartman misplayed Davide Somma’s cross, leading to a scramble inside the penalty area. Ryan Johnson’s shot was blocked by the Kansas City defense, but the rebound fell to Shea Salinas, who blasted it home from 15 yards out for his first career MLS goal.

“We tied it up, which was good,” Scott Sealy said. “It showed great character by our guys to find a way to score. But we fell asleep on the last kick of the game. That’s when we are supposed to be most alert, but we fell asleep and they took advantage of that.”

It was one way traffic in the closing minutes as Kansas City pressed for the deciding goal. In the 90th minute Claudio Lopez beat Jason Hernandez to a long bouncing pass, but his left footed blast from a tight angle five yards from goal was knocked away by Cannon.

One minute into stoppage time, Hercules Gomez slammed a 30 yard shot that required Joe Cannon to make a diving save. The rebound slipped free to Jack Jewsbury crashing the net, but Cannon recovered to block his shot from close range.

Then, three minutes into stoppage time, Lopez’s corner kick found Hercules Gomez, and Gomez found the back of the net.

“When you get good service, good things happen,” Hercules Gomez said. “It was a great ball in from Claudio Lopez. I just made a hard run and was very fortunate to get some something on it and it went in. Guys did a good job of creating space, and Claudio provided great service.”

“They found a way to win the game,” Scott Sealy said. “That’s what you do this time of the year, you look for ways to win. Kansas City was able to do that. Obviously, we’re disappointed. We have one more game to play so we need to go home and make sure we win in front of our fans.”