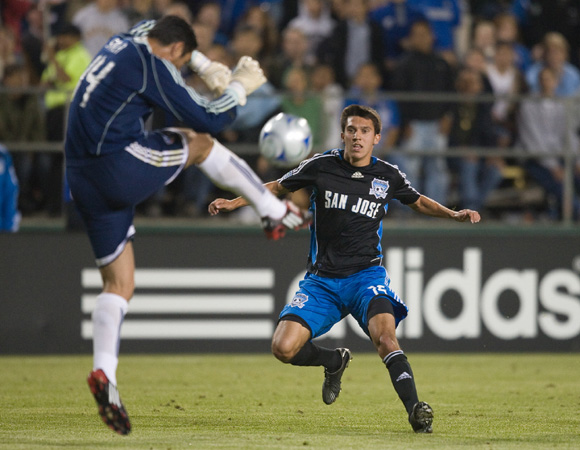 San Jose went ahead 1-0 on Ryan Johnson’s 58th minute goal, and appeared to be on their way to killing off the game when Blake Wagner’s low hard cross from the right wing banged off Francisco Lima’s arm, or perhaps even his midsection under his arm, inside the penalty area. Lima appeared to be pulling back — a classic case of the ball playing the man — but referee Abiodun Okulaja pointed to the penalty spot, turning a deaf ear to the Earthquakes’ passionate protests. Goalkeeper Joe Cannon guessed the wrong way on the penalty kick, and Cooper’s 16th goal of the season gave Dallas a point on a night when both teams desperately needed a three point win to keep their playoff aspirations alive.

"It was two poor decisions by the referee I thought, to change the game to be honest," said Earthquakes coach Frank Yallop after the match. "…It doesn’t hit (Francisco) Lima’s hand. It doesn’t hit anywhere on his arm, (and that's) the penalty that ties the game. It’s difficult at this time of the season; we could have gotten a win. The guys really worked hard tonight, against a good team, and deserved to win the game."

After dropping a 3-2 decision to Real Salt Lake last Saturday, Yallop tweaked his backline a bit, moving Jason Hernandez inside to central defense and inserting James Riley at right back. The move appeared to work well, as San Jose gave up few clear chances in a rugged and ragged game.

Both teams struggled to find any rhythm or possession in a forgettable opening half. A chance fell to San Jose in the 23 minute when a pass inside Dallas’ penalty area deflected to Darren Huckerby on the left wing, but his first time shot curled just over the bar from 15 yards out.

The Earthquakes’ lone bright spot in the opening stanza came in the 33rd minute, beginning with Huckerby playing the ball forward to Scott Sealy just beyond midfield. Sealy knocked it back to Arturo Alvarez, who fed Huckerby bursting up the middle and breaking in alone on goal. But Huckerby couldn’t beat Dallas goalkeeper Dario Sala, who came out to cut the angle and make the save.

Dallas’ best chances in the first half came from set plays and a San Jose give away. An 11th minute Marcelo Saragosa header from an Andre Rocha corner kick went wide right from 10 yards out. In the 26th minute, Rocha’s free kick from 25 yards caused goalkeeper Joe Cannon to stretch to pull it down at the right post. Just before half time, a poor Ronnie O’Brien back pass went to Jeff Cunningham, who fed Kenny Cooper racing towards goal, but Nick Garcia recovered to block Cooper’s shot just inside the box.

The Earthquakes finally got their attack going after intermission. In the 57th minute, Arturo Alvarez took a long throw in down the right wing and made a 30 yard run at the Dallas defense, cutting inside and shooting from 15 yards to force a Sala kick save.

Ryan Johnson then came in for O’Brien in the 58th minute, and paid immediate dividends. A long ball out of the back from Jason Hernandez bounced over Scott Sealy, springing Johnson up the middle. Sala again came out to cut the angle, but Johnson’s left footed shot from the top of the box slipped by the Dallas goalkeeper for his fifth goal of the year and a 1-0 San Jose lead.

"I’m a little bit lucky," said Johnson. "It was my first touch, but I just tried to anticipate the ball that came through and I timed it well, so I got my one chance. I normally only get one chance anyway, so I pulled away. Sometimes you don’t always get that goal."

San Jose almost gave that lead away in the next few minutes. A poor Francisco Lima back pass in the 60th minute was stolen by Jeff Cunningham, but James Rley came back to battle Cunningham as he broke into the penalty area, and Cannon was able to save Cunningham’s weak shot.

In 64th minute, from a short corner, Cunningham headed down a cross to an open Duilio Davino at the six yard box, but his shot was blocked by Nick Garcia.

From there, an ugly game didn’t get any prettier.

In the 72nd minute, when Johnson flicked a header towards Scott Sealy breaking into the box, the play was broken up by Davino’s intentional handball at top of the arc. The play earned Davino a yellow card, but inexplicably not a red. The ensuing free kick was wasted by Sealy with a poor shot well over top of goal.

Then came the controversial penalty kick call in the 87th minute, and Kenny Cooper took advantage of the opportunity to knot the game at one.

After the PK, Jovan Kirovski came on for Scott Sealy, and almost repeated Ryan Johnson’s heroics for San Jose. In stoppage time, James Riley’s cross from the right wing found Kirovski 15 yards from goal, but his header went wide left.

With each team earning one point, Dallas crawls into a three way tie for third place in the MLS West with Colorado and Salt Lake, though both those other teams now have a game in hand. San Jose moves up to sixth, but are still at least four points shy of a playoff spot with just four games left on their schedule.

San Jose now has nine days off as they prepare to host Chivas USA in yet another “must win” game, October 11 at Buck Shaw Stadium.