Share All sharing options for: Quakes face good and bad against Toronto 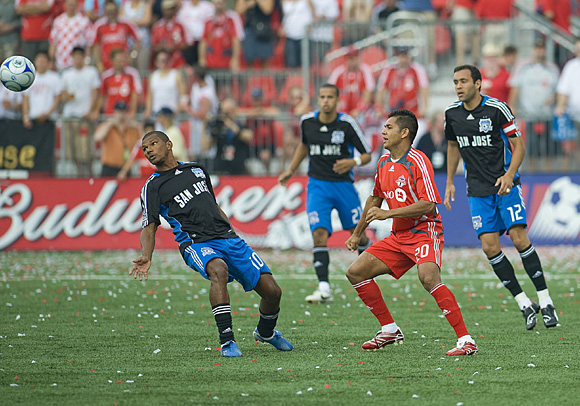 There's this wonderful children's book called, That's Good! That's Bad!  Probably won a bunch of awards in the world of children's literature, which is a lot more than I can say about my columns here, excepting the thought that both pieces are probably suited for the same age group. It starts out with a kid buying a balloon at the zoo (that's good). The balloon pulls him into the air (oh, that's bad), drops him onto an elephant (oh, that's good), but he slides off and lands in the alligator pit (that's bad!) You see where I am going with this?  No?  This is my last 2008 San Jose Earthquakes pre-match analysis, which has all three of my readers collectively nodding and humming to themselves, "Oh, that's good."

Just like the P.D. Eastman book, Go, Dog. Go!, that I had on my desk in the late 80's when I was trying to put together big land deals, That's Good That's Bad can provide some insight to the 2008 Quakes and their season.  Getting the team back, good. We're an expansion team, bad. We got Frank, good! No players, bad. We got Hucks! Good! Our best player, Ramiro Corrales, is hurt! Bad. But there's Joe Cannon—Good. His kicking is kinda weird—Bad. We're gonna make the playoffs! Good. We didn't — bad. We get a high draft choice next year! Good. We traded it away—bad.

This weekend's match is the last so I guess that's bad, but in fact it is good, this team needs closure and to get on with what is required to provide a winning side in 2009.  The opponents Saturday night have had a chance to get it right and have failed to do so.  Toronto FC is not a bad side but have made so many dramatic changes both on and off the field that next year may indeed prove to be just like this year.

Let's take a look at their current starting eleven:

Greg Sutton in goal, with Tyrone Marshall and Kevin Harmse central, while out wide in defense we have Jim Brennan and Marvell Wynne.  In the middle  of the park, Carl Robinson will hold, flanked by Hunter Freeman and Rohan Ricketts.  In front of Robinson and just underneath the strike pair is Amado Guevara.  Up top, Chad Barrett and Danny Dichio.

Greg Sutton is more than competent as I have alluded to before.  Tall and commanding in the box, he is one of MLS's best.  Tyrone Marshall at center back is still a force and although he tends to dive in early on occasion, he knows the position well and plays the role.  Kevin Harmse is a converted midfielder but as a center back he is pretty good.  He likes the ball at his feet and can be a little errant in his passing, however.  Jim Brennan and Marvell Wynne provide the wide cover, with Marvell being the danger man.  Brennan will stay at home but Marvell will get forward — quickly.  His end product has improved as well, meaning not only does he get forward, the resulting cross is pretty darn good.

Carl Robinson has attempted to  take up the slack created by the departure  of Maurice Edu.  Maurice went to Rangers in Scotland and I still struggle to understand why MLS teams let players go at the dire expense of a the franchise.  When Dallas let Toja go this year, their season was over.  Robinson is TFC's money guy and is supposed to be their franchise player, but I am not convinced.  Hunter Freeman is playing wide in the midfield now after spending most of his career as a defender.  Rohan Ricketts on the other side, scored a brace last week, which is good.  That's makes it four in 25 starts — bad?

In the temperamental Amado Guevara, one gets either a very good player or a quitter on any given Saturday. He is not my type of player and regardless of his perceived production, I would never have him on my roster.  Back when I was coaching and we had an interest in a particular player, we would call a teammate, former or current, as well as the team admin to check out the potential player's attitude on and off the field.   I think I could deal effectively with the mercurial Jeff Cunningham, but I could not deal with Guevara.  He is a danger, though, and Mr. Lima will have to pay attention.

Up top Toronto has a lot of options, even though they traded away their best striker in Jeff Cunningham.  Danny Dichio is the foil — big and strong, and he brings attitude. This is exactly what one wants in a target forward.  Apparently there is a question if he will be around next year.  If he is on the pitch, he'll be out to show how valuable he really is.  If he is on the bench, then a decision has already been made.   Chad Barrett, who came over from Chicago in the McBride deal, has been good since his arrival.  Chad is a box player, as we mentioned in a previous column.  Chad requires service to be effective and sometimes more than one delivery.  Coach John Carver's options include Carlos Ruiz and Abdus Ibrahim.  I have a feeling we will not see Ruiz, but I hope we see the youngster Ibrahim.  I think Ruiz is done and I find no particular pleasure in watching someone make a lot of money without trying.

In the TFC camp I believe there is more riding on this match than meets the eye.  A solid victory and players might buy into next year's program with Carver.  A loss and the wheels could come spinning off.  Mo Johnston, the manager and Toronto's director of soccer, does not waste time.  Carver could be gone in an instant.  Paging Preki! "Oh, hold on Mo, DC is on the line."

In the San Jose camp, everything is a little different.  Not hunky dory, mind you, just a bit more tolerant of the season and the team's situation.  The San Jose coaching staff will be given three years to get the boat on course, but if next year is like this one, the third year could be tenuous.   The staff know this but the players don't.  The players will be fighting to remain in the coaching staff's plans for next year. While a loss at home in the last match is pretty much unacceptable, the players will be hoping to shine individually while remaining to wave the team banner.  Sometimes this can work effectively, as without individual effort, a team cannot collectively achieve a result.  One has to hope the individual decisions on the park are in the best interest of the other ten guys on the field.

Hey and for you three or so that have read this stuff during the year, thanks.  I have enjoyed cutting my teeth here a little bit and that's good.  But we're done, and yep, that's bad.

(Tim Hanley is a former assistant for the Quakes and Dynamo (that's good) as well as the Galaxy (that's bad). Tim also played for the NASL Quakes and was once mistakenly identified as George Best's brother, both of which were good.)