Catching up with Hall of Famer Hugo Perez

Share All sharing options for: Catching up with Hall of Famer Hugo Perez 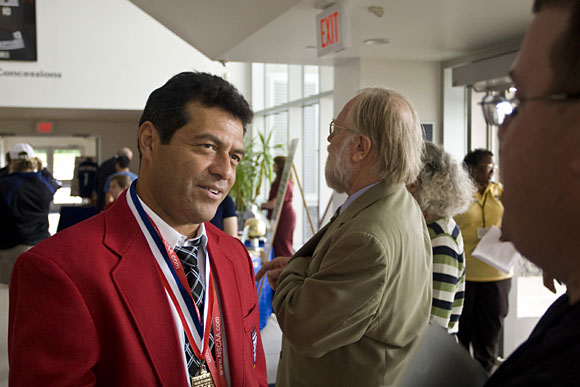 Hugo Perez speaks with a reporter after his August, 2008 induction into the National Soccer Hall of Fame. Photo: Howard C. Smith, isiphotos.com

(LOS ANGELES) — At the opening of the 18th Honda Player of the Year Award ceremony, master of ceremonies Andres Cantor described the luncheon as a “high school reunion.” About a dozen former winners and United States team veterans were there, including Hugo Perez, the first winner of the award in 1991. Perez’s career included stints in the NASL and Europe in addition to 73 caps for the Stars and Stripes. This summer he was inducted into the National Soccer Hall of Fame.

After the banquet, I caught up with the former California Victory assistant.

How has all this (the Honda Award) changed from when you won?
I think it’s given a lot of credibility to recognize the best players from the United States. Every year it’s been getting better and better and I hope it continues.

I think from the first year it was important.  There were a couple of guys who were nominated with me that had done great also, then a few years later they won it. For me, it was a great honor because it is something that recognized in America who is the best player.

What’s it like getting all these former players together?
I think it’s great. Some of the guys I haven’t seen for years. Again, this is a part of history. All these guys have been on the national team. The importance of this group was they are the foundation that was put in those years for the ones coming up now.

What have you been up to the past couple of years?
I’ve been coaching. I work with the US Soccer Federation. I’m in charge of the U.S. Academies on the West Coast and doing some work with the Under-20 national team. Basically, this year I’m full time with the federation now, developing players to make the national team better.

Tell us about the U-20 trip to Spain.
They leave this week, the 15th. I’ve got to stay. They are going to play a Real Madrid team, an Atletico Madrid team and the national team, the Under 20s. It is these games that are important because when you go to Europe, you really see where you are at, as far as your condition and level you’re at. So it’s very important for the qualifiers next year.

Are you going to make the qualifying games next year?
I think so. Hopefully. We don’t know the schedule yet but hopefully I’ll be there.