Who is Clarence Goodson, and why MLS should care

Share All sharing options for: Who is Clarence Goodson, and why MLS should care 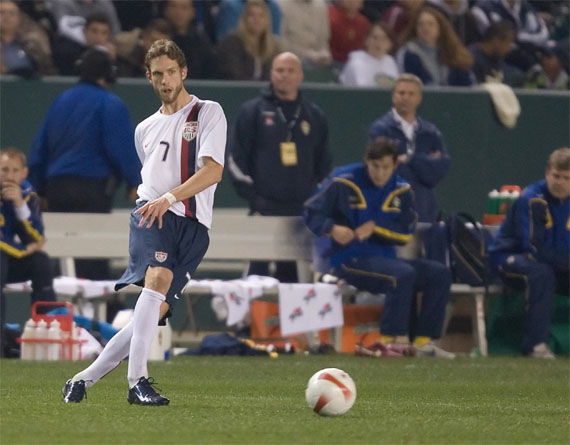 Clarence Goodson. Pat Noonan. Jay Needham. These are all players who could be playing in MLS now but chose other leagues instead. CLS columnist Pete Ratajczak hopes MLS knows why. Serious San Jose Earthquakes trivia experts will recognize Clarence Goodson as the team’s second pick (after Ryan Cochrane) in the MLS Expansion Draft. In 2007, he started 27 games as a defender for FC Dallas and played 2,297 minutes, plus another 90 in the playoffs. In January of this year, when the US National Team hosted Sweden, Clarence Goodson got his first cap, playing all 45 minutes of the second half in a 2-0 win.

In 2008, Clarence Goodson will be playing for AK Start, in Norway’s Adeccoligaen (the league one step below Norway’s Premier League). Clarence Goodson is a good, solid, defender, and a four year MLS veteran. Why would he choose the bright lights of Kristiansand, Norway and the glamour of Adeccoligaen football over a career playing in the California sun? Well, in 2007, Clarence Goodson made all of $53,000. I don’t know how many Norwegian krone he’ll get this year, but it’s safe to say he got a raise.

Here’s another name, a more famous name. Pat Noonan. 42 goals for the New England Revolution over 5 MLS seasons. 13 caps for the National Team. Pat Noonan is also off to Norway, but at least it’s Norway’s Premier League, the Tippeligaen, where he’ll play for Aalesund FK. Pat Noonan made $227,000 in 2007, and will make the equivalent of over $400,000 a year for the next three seasons in Norway.

Now, I expect and am happy to see MLS players graduate to bigger clubs in Europe, but the Tippeligaen is a long way from the Premiership. (Average attendance in the Tippeligaen in 2007: 10,485.) To some observers (read: soccer fans who are slow to embrace MLS), this kind of news leads to questions and sarcastic remarks about how “major league” MLS truly is.

Take the case of Jay Needham. A defender with Southern Methodist University, Jay Needham was drafted by DC United as the 32nd overall pick of the 2007 Super Draft. He was offered a contract by DC United, but turned it down for a more lucrative offer from the Puerto Rico Islanders. That’s the Puerto Rico Islanders of the USL First Division. Jay wound up playing over 2,000 minutes in 2007, and was named USL First Division Rookie of the Year.

Again, what hurts is that we’re not talking about millions of dollars here. $250,000 would have covered the raises all three players combined received from their new clubs. MLS is losing quality players over rather small sums of money, and this is happening at a time when MLS rosters are notoriously thin, and while the league plans to spread the talent still thinner as Seattle and Philadelphia (and St. Louis? and Miami?) field teams.

The MLS salary cap is $2.1 million per franchise, which has to cover 18 active roster players and 10 developmental players. (Designated Players, and a few special cases like Landon Donovan and Carlos Ruiz count as $415,000 against the cap.) It’s tough to field a strong starting eleven, much less build any bench strength at those prices. While a David Beckham or a Juan Pablo Angel is a very welcome addition to the league, overall the level of competition (and the level of interest from those soccer fans who are slow to embrace MLS) won’t increase without taking care of the other 17 guys on the roster, not to mention all those clubs who don’t go the Designated Player route. This means addressing the salary cap that currently makes fielding a quality team difficult if not slightly impossible.

As a league, MLS is stronger with proven, home-grown talent like Pat Noonan and Clarence Goodson taking part, and with the Jay Needhams of this world joining the talent pool. I hope the MLS powers that be, at their first available opportunity, will seriously recalculate what they need to spend on talent. Now that MLS has their TV contracts signed, and all those new stadiums on line (with more on the way) and expansion teams lining up to pay ever increasing franchise fees, the money is flowing. MLS asks their fans to pay major league prices, they should be sure they’re doing the same to put a quality product on the field.