Breaking down the Galaxy

Share All sharing options for: Breaking down the Galaxy 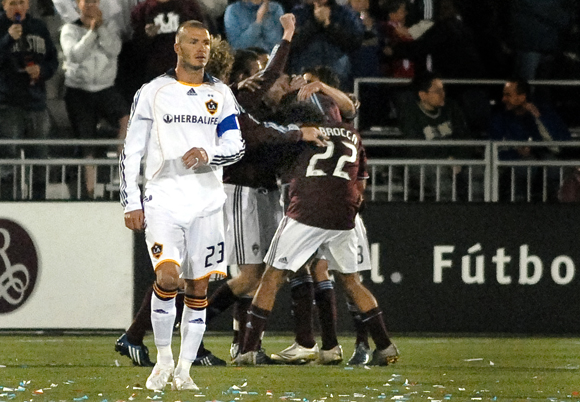 The Quakes will gladly settle for more scenes like this one on Thursday. Photo: isiphotos.com

Every quality coach and his staff know that game analysis based on one match provides only an incomplete picture at best. When that match features your next opponent one has to be mindful of overestimating.

Had the Galaxy kept it close, a loss, victory or draw, with zeros and/or ones, the breakdown is easy. Their line up, barring injury and/or suspension, remains pretty much the same. You realize they will look to improve in certain areas but what you see is what you get.

In Commerce City, Colorado, a mile above sea level, things didn't quite go the way Los Angeles planned. As an aside, Fernando Clavijo would be a little less than honest if he said the game went exactly how HE planned it! Not only did the Galaxy get beat, they had a complete meltdown.

The Galaxy has provided very little help in my pre-match analysis. I have too much information and not enough at the same time. I know they have lost players to suspension, injury, even poor performance perhaps. What I don't know is what are they going to do about it!

Here comes the overestimating thing; if I let all the opponents factors dominate my thinking, I am headed down a mysterious path which may in the end prove completely useless.

Let's try this; the analysis of, and the work you do with your own side, the attention to the training sessions and pre match agenda, of your OWN team is much more important than anything one can gain from outside information. Are we ready? How can we use our strengths to win the game? The answers to those questions are far more important than how the opposing team plays.

Here's how we beat LA. What is it that we can control? We know the pitch is large, it is the Galaxy's home opener, they have something to prove. L.A. must impress and will come out storming. Can't get overwhelmed by the atmosphere. So we'll sit in a little, start our line of pressure just on their side of the mid line. Can't go chasing them around their end too early. We must keep our shape both in defending as well as when we are attacking. Attack with no more than four and defend with a minimum of six. No big gaps between our lines. Aggressive defending in our end without silly tackles- for obvious reasons.

Individual match ups. We know how dangerous any team with Landon can be so, if he starts out wide, keep him out here away from goal. Landon is nowhere near as effective when out on the flank. If he is in the middle of the park, we need to be aware of him joining the attack late, picking up the second balls via knockdowns from a Gordon or Buddle. (Three guesses to why he absolutely loves playing with Brian Ching.) Here he is incredibly difficult to deal with. Our holding mid has to stay right in front of the back four. With David Beckham on the field we have to get our set play match ups correct. The ball will be delivered on target so everything must be challenged. Even if we don't win every header, we can put the attacking player off just enough through a good early jump and challenge. No silly fouls near the box.

And now us. Let's keep the ball when we win it. Force L.A. to chase and use the same legs and lungs that struggled on Saturday. Get a rhythm, which sometimes can only happen through possessing the ball. When under pressure let's knock the ball into the channels of this huge park and chase it down when we in a good position to do so, maybe nick a corner. Every shot, every set piece represents one of what may be very few chances, let's get them on frame and follow up on their somewhat shell-shocked keeper. No score at half is OK. In the Colorado match there were moments the Galaxy looked out of sync, lost, caught ball watching — can we expose this? LA has to come at us, they are under pressure to win and win convincingly and elegantly. We'll draw them in, hold our lines and catch them out of shape, maybe put one over the top-turn 'em around and nick a goal.

Defend like Champions
Possess the ball, play intelligent simple football
Collective shape, with and without the ball
Finish our chances

(Tim Hanley is a former assistant coach for the Earthquakes, Houston Dynamo, and L.A. Galaxy.)