Share All sharing options for: New York shuts down, shuts out San Jose, 2-0 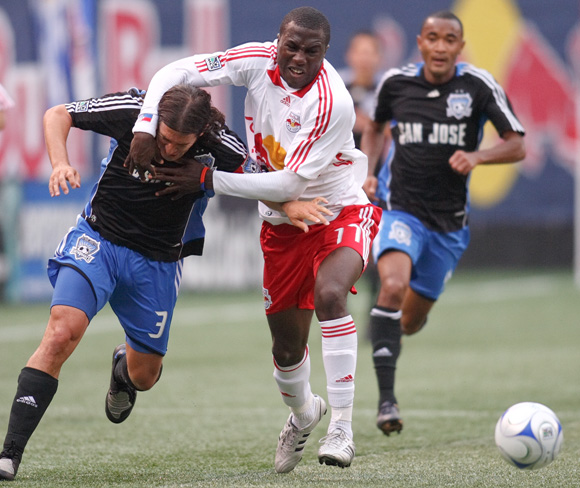 In a physical and forgettable game Sunday at the Meadowlands, the San Jose Earthquakes fell to the New York Red Bulls, 2-0. A 79th minute penalty kick from Mike Magee, along with an injury-time goal from Jozy Altidore, gave New York the points they deserved, while San Jose struggled to find a way to go forward, earning more yellow cards (3) than shots on goal (2) on the day.

The penalty kick came after a long through ball from John Wolyniec sprung Jozy Altidore on a break away. Ryan Cochrane tripped up Altidore just inside the box, and referee Michael Kennedy immediately pointed to the spot. On the penalty kick, goalkeeper Joe Cannon guessed the right way, but couldn’t get a hand on Magee’s blast.

Just a minute later, San Jose almost found an equalizer as Kei Kamara’s header stretched Jon Conway to full extension to slap it away. It was the closest the Quakes would come to scoring all afternoon.

Five minutes into injury time, John Wolyniec held off a couple defenders inside the box, then laid off a pass for Altidore. Given the rough treatment Altidore had been receiving all day (beside the PK foul, he also endured two of the Quakes yellow card fouls) his was a sweet smile of success as his shot squeezed in off the near post to put the finishing touch on New York’s win.

“It was a bit of an off game for us," Quakes coach Frank Yallop said afterwards. "We didn’t create as much as we would have liked going forward. However, we did have some success stopping them and the game seemed to be a bit of a stalemate. I thought we could have come out of the game with a tie, but a couple of plays at the end and that is the game.”

“At halftime, I told the guys we needed to be prepared to a get a clean sheet in the second half," Yallop said. "We didn’t seem to have enough to get the win today, but we need to come out of a game like this with a point.”

San Jose started the game with the same eleven that beat Colorado the week before, while New York countered with John Wolyniec filling in for the injured Juan Pablo Angel at forward. Angel wasn’t missed, as Wolyniec had a hand in both New York goals, and almost netted a third himself.

The opening 45 minutes was scoreless, though New York enjoying some serious scoring chances. In the 6th minute, a Claudio Reyna corner kick found Luke Sassano alone at the far post, but he volleyed it over the top. In the 38th minute, it was Reyna again, working a nice give-and-go with Wolyniec inside the box. Reyna’s left footer beat goalkeeper Joe Cannon, but Nick Garcia was there to clear it off the line. In the 42nd minute, Jeff Parke headed a Dave van der Bergh corner kick just over the crossbar from six yards out. The Quakes' lone chance came just before halftime, but Jason Hernandez’s left footer from 20 yards rolled harmlessly to Jon Conway.

The second half was also predominantly one-way traffic. A Reyna free kick found Jeff Parke for a clean header in the 62nd minute, but he hit it right at the goalkeeper Cannon. After McGee’s PK goal made it 1-0, New York almost had a second goal in the 98th minute when Wolyniec beat Joe Cannon to a high bounce and got off a header on goal. Once again it was Nick Garcia to the rescue, chasing it down and clearing it off the line to keep San Jose in the game. Still, there was no stopping Altidore, who got his second goal of the year just seconds before the final whistle.

For San Jose, their road trip continues as they head to Utah for a U.S. Open Cup match Wednesday against Real Salt Lake. New York also hits the road, traveling to Toronto for Thursday night’s game on ESPN2.