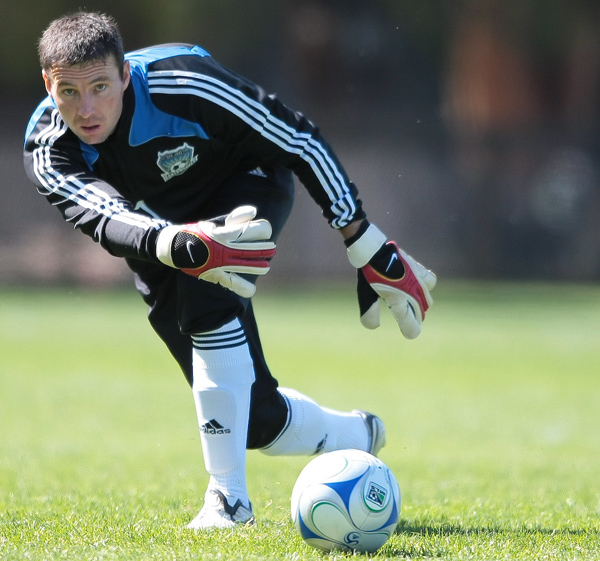 Earthquakes fans are thrilled to have Joe Cannon back in the nets for 2008. Photo: John Todd, centerlinesoccer.com/isiphotos.com.

It has been a long wait for San Jose soccer since that cold evening in Fall, 2005. On October 29, a 1-1 tie saw the Western Conference champs eliminated 4-2 on aggregate in the first round of the playoffs. What made it worse was that the defeat came at the hands of bitter rivals Los Angeles. Some Galaxy players even taunted back, “See you in Texas.” Two months later, the prophecy came true as the team was moved to Houston to become the Dynamo.

After resurrecting the franchise last year, San Jose finally gets to have a season opener again, against the Galaxy no less. The new San Jose Earthquakes have a long road to get back to the championship form that defined the franchise for the first half of the decade. However, it is a challenge the team brass is thrilled about taking.

The team building began by bringing in some familiar faces. General manager John Doyle and head coach Frank Yallop are two famous names in Bay Area soccer lore. Yallop then surrounded himself with two of his old players, Ian Russell and Ronnie Ekelund, as assistant coach and technical advisor, respectively.

However, they didn’t want a simple nostalgia trip. The staff has spent the winter molding together the best team they can and hope to surprise a lot of people in league play.

The Quakes went 5-1-2 against MLS sides this preseason. After a 1-0 loss in the “family reunion” game with Houston, San Jose went undefeated in the last seven. The highlight was a three-game sweep to win the Carolina Challenge Cup during Easter Week in Charleston.

“The team started to gel well and enjoy each other’s company on and off the field,” Yallop said. “The team spirit has been really good since day one. I’m happy with the team in general.”

Undoubtedly the most worry-free unit for 2008 is the goalkeeper position. Nine-year vet Joe Cannon returns as one of three former Quakes on the roster. Cannon was the starting keeper for the first San José championship in 2001 and is the franchise all-time leader in games (101), saves (434), and wins (46). He spent 2007 with Los Angeles after four years in Colorado. He started 29 games with the Galaxy and had 119 saves and a 1.59 GAA.

Competing for time between the posts is 38 year-old Preston Burpo. Burpo has spent two years in MLS with Chivas USA after nine successful seasons with the USL’s Seattle Sounders.

Fifth-year player Ryan Cochrane returns to the South Bay after two championships with the Houston Dynamo. Before that, he played two seasons with the Quakes and three years at Santa Clara University.

His backline mates include Nick Garcia, a nine-year veteran who was acquired by trading the top pick in the Super Draft to Kansas City. Fourth-year players Jason Hernandez and James Riley round out the back four.

Yallop said, “Ryan comes off two championships with a very good team and has not missed a beat here. Strong player, a leader; maybe not vocally, but he’s there everyday and plays hard in every game and every training session. That’s good leadership too.”

This area of the team is a work in progress for the coaching staff, but not without talent.
Twelve-year veteran Ramiro Corrales returns to San Jose after three years in Norway. Most recently, he helped SK Brann of Bergen win their first league title in 44 years.
Seventh all-time with 121 appearances for San Jose, Corrales moves to midfield for this season after playing defender most of his career.

Ronnie O’Brien, a four-time MLS All-Star in his six seasons, gets to suit up for another expansion team after getting acquired from Toronto for a first-round pick and allocation money. The 29-year-old Irishman comes with a reputation as one of the best setup men in the league, and looks to recover from the knee injury that truncated his season in 2007.

Ned Grabavoy was snatched in the expansion draft from Columbus. The former Gatorade High School Player of the Year had a career high three goals last year and figures to do more this season. Yallop describes him as a “terrific player, very crafty on the ball. I think he needs a good run and tons of confidence to be really good. He’s played as well as anyone this preseason.”

The biggest surprise could be rookie Shea Salinas, the only player taken by San Jose in the MLS Super Draft. The Texas native made a big splash in the Carolina Challenge Cup, not far from where he played college ball at Furman.

“With young players, you’re never sure how they’re going to pan out, but I’ve seen enough in Shea that he’ll be a good one,” said coach Yallop. “Shea has an explosive ability you can’t coach. We’re trying to teach him when and where he needs to be for the team but when he has a chance to go at guys and take shots and get crosses in, (we’re encouraging him to) do it. He’s very dangerous.”

The Quakes answered one of the remaining questions about their roster last week, in part at least, by trading Chris Pozniak to Chivas USA for John Cunliffe. Cunliffe, a native of Bolton, England, scored three goals in 15 games last season, and brings needed depth at forward for San Jose.

According to Yallop, it was a tough trade to make, but he hopes that the results this season will ease that worry.

“[Pozniak] was a utility player for us and we felt at the time, looking down the roster, we needed another forward because they’re the hardest ones to get. Chivas came in looking for Chris and we felt it was the right thing for us to do that deal. So it’s sad to see Chris go but we’re really happy to have John on board.”

The sides’ other two forwards bring an international flair to the Quakes. Gavin Glinton is the captain of the Turks and Caicos national team and is trying to make a big impact in his seventh year in the league. He took a couple years off to rehab from a leg injury and comes to San Jose as a favorite of Yallop from L.A. last season.

“Gavin, I’ve known for a number of years,” he said. “The opportunity came to get him again, and I got him. Gavin’s a good pro, a good dangerous player and looks like he’s getting back to his best in the preseason.”

Enigmatic Kei Kamara rounds out the forward position. After 13 starts over two years in Columbus, Yallop hopes the Sierra Leone native can produce.

“Kei, potentially, is a really outstanding player. I saw him play for Columbus a number of times and thought ‘I’d love to have that type of player on my team.’ He’s done real well in preseason and has a bright future ahead of him.”