Share All sharing options for: Quakes fall to Galaxy, 2-0 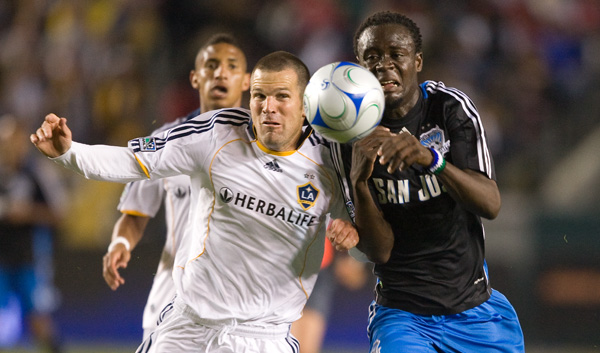 For San Jose Earthquakes fans, the eagerly anticipated Opening Day promised to be one to remember. Their brand new team came into the Home Depot Center fresh from winning the pre-season Carolina Challenge Cup, and their opponent, the hated LA Galaxy, was not only coming off a 4-0 drubbing in Colorado, but would be without their best defender Abel Xavier (due to a red card in that Colorado game) as well as big time scorer Carlos Ruiz (out with a knee injury). But dreams of glory quickly gave way to the harsh reality of life as a MLS expansion team, as the Earthquakes were dominated by the Galaxy, losing 2-0.

Earthquakes defender Nick Garcia summed up the game in one word: "disappointing."

For a moment, it looked like the team was off to a very good start. Two minutes into the game, Ryan Cochrane got on the end of a Ramiro Corrales free kick and headed the ball home, but he was ruled offside and the goal disallowed. TV replays, however, indicated that Cochrane was onside when the ball was played and the goal should have counted.

Things quickly got worse from there for both Cochrane and the Quakes.

In the 9th minute, Cochrane gave up the ball in midfield, and before you could say "oh no," Landon
Donovan found David Beckham alone on the right wing, and sent him in 1-on-1 against San Jose goalkeeper Joe Cannon. Beckham easily finished his first official MLS goal to give LA a 1-0 lead.

In the 37th minute, more Quakes defensive misery transpired as Beckham played a long ball to Donovan at the top of the box. Donovan beat the defense to the ball, then lifted a shot over the on-rushing Cannon to make it 2-0.

Fans wondering where the Quakes offense will come from this season are still wondering. Right mid Ronnie O'Brien was not a factor and neither was Ned Grabavoy at center mid. During the second half, the Quakes swapped out rookie Shea Salinas in the 57th minute for gavin Glinton, then pulled Ivan Guerrero for John Cunliffe in the 69th, but neither move added much spark. The Quakes were outshot 16-3, including 5-1 after half-time.

Still, Quakes fans will note that it's only one game, with 29 more to go. The team will have another chance to re-start in their home opener, April 12 vs Chicago.

(Be sure to check out our photo gallery from the match, too.)