The one that got away — Quakes fall to Columbus, 3-2

Share All sharing options for: The one that got away — Quakes fall to Columbus, 3-2 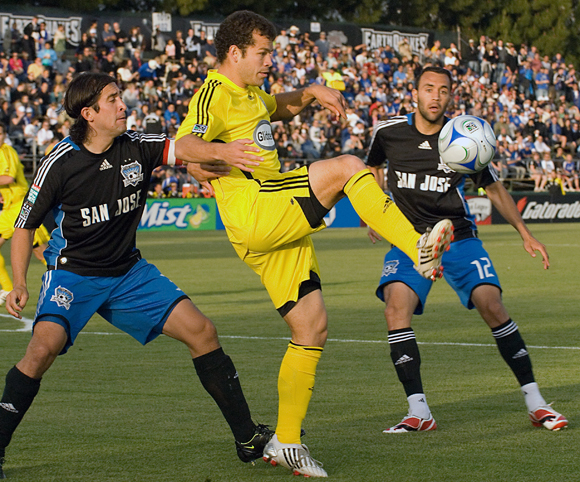 The Crew's Alejandro Moreno tries to control the ball in the Quakes' penalty area, under the watchful eyes of San Jose's Nick Garcia (left) and Ramiro Corrales. Photo by Joe Nuxoll, centerlinesoccer.com.

Disappointing. It’s a word that came up often during coach Frank Yallop’s post game interview after the ‘Quakes dropped a 3-2 decision to the Columbus Crew Saturday night.

“We scored two at home, and didn’t get anything, (not even) a tie out of it. It’s disappointing,” Yallop said. “We talked about (scoring goals) all week, but then we end up conceding three.”

The Columbus goals, two from Robbie Rogers and one from Brad Evans, all came in a ten-minute span late in the second half, wiping out a 1-0 San Jose lead, and proving to be enough for the victory. “We were not at our best in closing them down in our half (of the field),” Yallop said. “When someone’s running free you have to either stay with the runner or step to the ball, and we did neither. So, it’s disappointing. Two good runs by Rogers, and two good finishes, so, hats off to him. But, disappointing for us."

The Quakes had taken the lead just before halftime, as Ramiro Corrales got on the end of a Ronnie O’Brien corner kick. Corrales’ diving header broke a 251 minute scoreless streak for San Jose in MLS play (341 minutes in all competitions) and seemed a fitting way to close a hard fought first half that saw the Quakes battling the league’s hottest team on even terms.

San Jose pressed forward all night, and almost netted another goal in the 64th minute. Kei Kamara’s flick-on header found Ronnie O’Brien alone down the right wing, but when O’Brien tried to chip the goalkeeper from inside the box his shot missed wide left. “Ronnie’s chance at 1-0 was a good chance for us to really get a good lead in the game, and maybe go on to win it,” Yallop later said, “But it wasn’t to be.”

After forcing several Joe Cannon saves, Columbus finally broke through in the 73rd minute, when newly signed Emmanuel Ekpo (a Nigerian Under 23 National Team midfielder) sent Robbie Rogers streaking in alone on left wing. Rogers’ shot beat Cannon to the near post to tie the score.

In the 81st minute, it was Rogers again, this time taking an Alejandro Moreno pass up the middle to sprint past Cannon and put Columbus on top. “Speed kills,” Crew coach Sigi Schmid said, “and (Rogers) is so fast. And, he did well with his finishes.”

Just two minutes later, it was Brad Evans’ turn, receiving a Guillermo Barros Schelotto through ball and beating Cannon for a 3-1 Columbus lead.

The Crew needed that third goal as a spirited Earthquakes side battled to the end. In the 89th minute, San Jose scored once more from a corner kick, as substitute Ryan Johnson headed home Ned Grabavoy’s cross to bring the Quakes back within one. But they couldn’t find an equalizer in the game’s closing moments.

For Columbus, it was their fifth straight win, keeping them atop the Eastern Division (and indeed, the entire league) with 18 points. For San Jose, with four points through six games as they travel to New England for next Saturday’s match, there are some silver linings. But still, disappointment.

“I was quite pleased with a lot of things tonight,” Yallop said. “Our two subs (Ryan Johnson and Shea Salinas) came on and made a bit of difference. We moved the ball well at times. I still think we need our forwards to be dangerous in free play, not just on set plays, so we’re working on that. We’ve worked all week on that and things looked a little bit better tonight. So, we’ll keep plugging away.”

Defender Ryan Cochrane, recovering from a terrible head-on-head collision with Jay Ayres suffered in the April 30 US Open Cup match in Salt Lake, was available as a substitute, but did not get off the bench. Coach Yallop later said he wanted to keep the same defense that kept a clean sheet in the previous game (vs. Dallas).

Ex-‘Quake Alejandro Moreno got a warm round of applause when he was announced as part of the Crew’s starting line-up. At the start of the game, Moreno was tied for second among MLS goal scorers with 4.

Besides Robbie Rogers (who now has five goals in his last five games), Crew coach Sigi Schmid said midfielder Brian Carroll deserved praise for his play Saturday night. “Carroll, in the middle midfield, has been a big plus for us. We keep losing central midfielders: Adam Moffat got injured last week, and Stefani Miglioranzi gets injured early in this game. Carroll’s been that fulcrum in the middle of the field, he anchors it for us.” Carroll was originally chosen by the Quakes in the expansion draft and then traded for Kei Kamara before the season started.