Share All sharing options for: New Quakes earn their stripes in 2-1 win 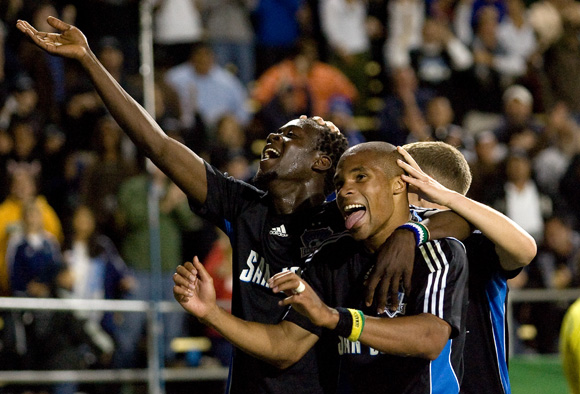 SANTA CLARA - In a battle of past and present Earthquake teams on Thursday, the 2008 edition showed they deserve the mantle of San Jose's team.

In the first meeting between the two franchises, the resurrected Quakes got two second half goals and beat the two-time defending champs, 2-1, in front of an exuberant crowd of 10,046 fans at Buck Shaw Stadium and an ESPN national audience. San Jose (2-5-1) shook off a frustrating first half in the process, and then held off a furious Houston comeback in the last five minutes to record their first home win.

San Jose had the majority of attack throughout but was held scoreless for sixty-six minutes until Kei Kamara fired off a five-yard shot that Pat Onstad couldn't stop. The Earthquakes made it 2-0 in the 81st minute courtesy of Ivan Guerrero. Houston (2-3-4) pulled one back seven minutes later off a redirect from U.S. national team member Brian Ching, but San Jose hunkered down through four minutes of stoppage time to snap their four-game winless streak.

"We were playing a good team and it was good to get a win off a team of their caliber, but the win was not any different than getting a win in any other game." Yallop said.

As expected, the night began with nostalgia for those who formerly wore the blue. In pregame introductions, Houston's Dwayne De Rosario and Brian Ching drew loud cheers, but outsiders without a San Jose connection like Franco Caraccio were booed. When the game kicked off, the current San Jose players played with an intensity that their Texas counterparts could not match.

Houston had trouble holding possession as three long balls in first four minutes went out of bounds. Following a Houston free kick that went off the wall in the 11th minute, San Jose controlled possession and the offensive chances.

In the 14th minute Johnson made a great run and crossed into the box, but Houston defender Bobby Boswell prevented the ball from getting to Ronnie O'Brien. Two minutes later Johnson headed to a streaking Guerrero who couldn't get a clear shot but won a corner kick.

Houston briefly counterattacked, and in the 23rd minute a diving Joe Cannon took the ball off Caraccio's feet before he could get in a shot.

The action peaked in the 33rd minute. San Jose's nearest miss came from Kamara's diving header which was redirected off the post by Guerrero. That led to a triple crescendo of corner kicks that San Jose couldn't convert. The first cross was knocked back out by Onstad. The second gave Johnson a near-post shot but it went off of De Rosario's nose for another corner.

San Jose's frustrations started to bubble up and led to a 35th minute yellow card on Nick Garcia. That started off a rare five-minute window where Houston controlled possession and pushed forward on offense. However the best Houston could do were consecutive soft headers by Holden and Ching which were easily caught by Cannon. In the 40th minute, Santa Clara alum Ryan Cochrane garnered a yellow for his "desperation foul" on Ricardo Clark at the cusp of the penalty arc. Houston's misdirection free kick fooled no one as it hit the San Jose wall before the put back was caught by Cannon.

The second half started with Houston holding possession early. In the 49th minute, a Stuart Holden volley forced a diving save by Cannon, while four minutes later, Caraccio out-dribbled himself after a great run on the right and lost possession eight yards away from the goal.

Then Brian Ching got a corner in the 55th minute after Hernandez mishandled a clearance, but Eddie Robinson headed wide left

There was a scare five minutes later when Robinson went down and was taken out for abdominal pain. He briefly returned, but was replaced in 64th minute by Patrick Ianni.

The momentum then turned to San Jose. The 67th minute brought the crowd alive when Kamara controlled a header from Grabavoy and blasted his second goal of the season for the early 1-0 lead. Houston almost equalized in the 71st minute after substitute Kyle Brown had a good run. However his shot was stuffed by a trailing Cochrane, leading to an easy save by Cannon.

San Jose scored the apparent clinching goal when in the 81st minute Ivan Guerrero took a bad Houston pass from midfield passed it to a streaking Ryan Johnson. Johnson's shot from the right was deflected by goalkeeper Pat Onstad back in front of a charging Guerrero who put away the rebound for his first San Jose goal.

Houston pressed and avoided the shutout two minutes from time when Ching put in his second goal of the year from Brad Davis' cross. In the four minutes of stoppage time that followed, the Dynamo's best chance came from a sliding header by Ching that went a yard wide.

At the final whistle, San Jose fans cheered the win, savoring the moment in which their team truly became their team by literally beating the past.

"It felt great to get the win. Obviously Houston is a good opponent and the best team in this league," said Cochrane, who was playing his first game in Buck Shaw after missing the opener with a concussion. "We came to do what we needed to do tonight and set a tone for Buck Shaw Stadium in the future."