Share All sharing options for: Quakes keep shooting blanks in tie with Dallas 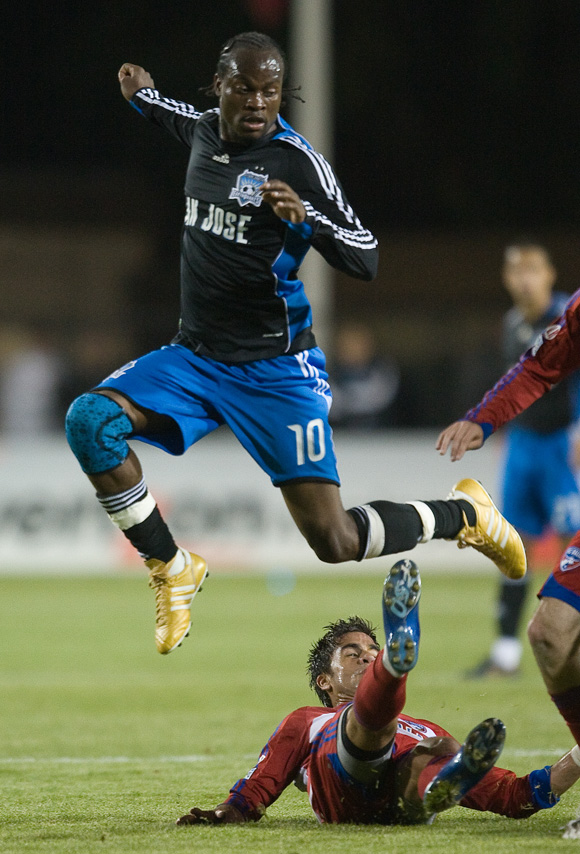 SANTA CLARA - At least the Earthquakes' second home opener was a little better than the first.

At their first game at Buck Shaw Stadium, the resurrected San Jose franchise blistered the FC Dallas defense for nine shots and nine corners but could not break through and had to settle for an entertaining but frustrating goalless draw.

After a maddening 1-0 loss to Chicago three weeks ago in Oakland, the Earthquakes looked to christen their regular home stadium with a positive result.

In front of a standing room only crowd of 10,515, San Jose (1-3-1) rode the home fans' energy and kept the Western Conference leaders on their heals. While they produced more chances then Dallas, San Jose still showed their problems in finding the back of the net.

"Take out not scoring and it was a terrific performance by us," Earthquakes coach Frank Yallop said after the game. "We did everything right but score, and I do not want the guys to start to get anxious because that will come."

Dallas got the game's first good opportunity in only the 4th minute. San Jose's Ivan Guerrero was called for a trip in the defensive third that negated a fast break opportunity for the home team. On the ensuing free kick the cross was headed over the bar.

For the next twenty minutes, San Jose had the majority of the possession. In the eighth minute, Ramiro Corrales got a shot off that ricocheted off the Dallas defense. It went right to Kei Kamara who let loose a shot from the right that went safely in the arms of Dallas netminder Dario Sala. One minute later, Ned Grabovoy got a steal and fed it to Guererro, but his shot went over the bar.

In the 17th minute, Ronnie O'Brien earned the first of what would be nine corner kicks for San Jose. Five minutes later, Guerrero gave the crowd a thrill when he stole the ball off Dallas defender Drew Moor, dribbled the baseline like a tight rope and crossed it before Dallas hurriedly cleared it out for another corner. That corner bounced through the box to a sliding James Riley but he couldn't put it away.

More excitement came in the 44th minute when Eric Denton blasted a shot off which unfortunately hit Gavin Glinton's back. Ramiro Corrales hit the rebound left of the goal.

The second half opened with more aggression from the home team. In the 50th minute Kamara could not get a good foot on the ball from five yards away after a great pass from Riley. Three minutes later, Corrales fired a left-footed free kick that curved at the end and forced Sala into a quick save. One minute after that, San Jose counter attacked again but a sliding Grabavoy couldn't connect with Kamara's cross.

Dallas then got a glimmer of offense in the 56th minute. On a corner kick, Moor's diving header was cleared but former Earthquake Arturo Alvarez missed the rebound over the bar. The Earthquakes' attack peppered the Dallas goal again but three crosses ended fruitlessly, much to the chagrin of the players and fans. After a clear out from a corner, Dallas had a great chance when Alvarez took a long unencumbered run to right outside the penalty box but sent his shot about 2 feet over the bar.

"We are happy with the performance defensively, but a little disappointed that did not do more offensively to create chances," Dallas coach Steve Morrow said.

With eight minutes to go, Dallas had their best chance after Jason Hernandez committed a foul at the top of the arc. Dallas wasted the opportunity however as Pablo Ricchetti tapped the free kick over the bar.

San Jose continued the pressure but the shots wouldn't fall and Dallas escaped with the tie.

"I think we had a couple of opportunities on the break in the second half where we could have done better. It was not our best night offensively, but we are pleased with clinching the tie," Morrow said.

Despite having the upper hand in aggressiveness, San Jose did not commit any offside infractions while Dallas committed eight. San Jose had a 9-8 edge in shots, but only one of them was on frame while Dallas had three shots on goal. The Earthquakes look for their elusive first home goal and home win when they take on Eastern Conference leaders Columbus next Saturday.