Share All sharing options for: Flank play could be critical if Quakes want to win at RSL 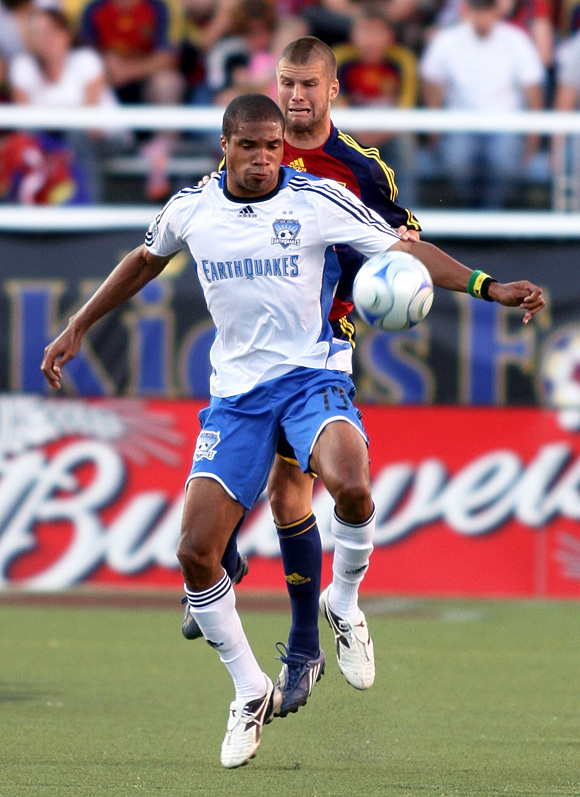 Getting the ball in from wide positions to Ryan Johnson, seen here with RSL's Chris Wingert, could be key for the Earthquakes. Photo: Julia Fizer, isiphotos.com

Just when you think you have it figured out, you're back on an airplane, this time to Salt Lake City, Utah. While in the air you're thinking about the line-up. Do I make changes, or leave it alone? The service on two of Edson Buddle's goals came from the Quakes' right side. Rookie mistakes or match-up in the middle? RSL plays through the middle, not working the flanks as much as L.A. We lost the midfield battle in Oakland. How do I take control of the midfield in Salt Lake? Or does it matter — we're at Rice Eccles, so all bets are off?

We know Rice Eccles now, ping pong soccer. Real likes to play direct: find the big guy Duescher up top, he knocks it down, and their midfield picks up the scraps. Findley runs through. Real's eleven consists of Rimando in nets, Olave and Borchers in the middle of defense, Beltran and Wingert defending wide. In the middle of the park Kovalenko, Morales, Cordoba and Beckerman. Duescher and Findley up top.

Real Salt Lake's strength lies in their midfield and one could add the top two as well. Duescher is good in the air, plays the foil role well. Findley is really living up to his potential. The Galaxy pegged him as their first choice in the 2007 MLS draft and, after trading away their first two choices, were surprised to find him still available at 16.

Kyle Beckerman continues to impress me. I am surprised Bob Bradley didn't take a longer look at Kyle for the qualifiers. Kyle loves to get forward now and has become dangerous around the box. So here
you have a player that started out as a defensive midfielder and now has become a force in the attacking areas. Against Chivas in Real's last match, he played a superb ball to Findley for the game's lone goal. If there is a weakness, it is RSL's defense. They can be beat. The midfielders occasionally take chances holding the ball too long and losing it in bad areas, gifting chances to the opposition. In that Real likes to play through the middle, the flanks are open in transition.

Assuming the Earthquakes trot out the same eleven, and have learned from the two previous matches at Rice Eccles, the focus should be on limiting service to Duescher (don't allow him to be this week's Buddle), picking up the "seconds," and keeping team shape, since RSL will try and play quickly up and through when they win they ball. In possession play "in to out:" find a midfielder, push the ball wide to feet or into space as RSL collapses, then get it to Ryan Johnson in the box with the second forward pouncing on the knockdowns. In a perfect world, one would look to pressure the Salt Lake back four but San Jose has yet to do this effectively as a unit. So, decide where, how and when to pressure. If the Earthquakes choose to sit in, mark up tight when Real's defenders look to pass out of the back. With Ramiro wide on the left and Ronnie O'Brien on the other side there is the potential for great service to the Earthquake forwards.

Ronnie O'Brien has to play as points are dear and hard to come by. We will probably see Shea Salinas early in the match if he doesn't start. (I think he should start with O'Brien in the middle). Earthquake goals come from wide so keep at it, force RSL to chase. Rimando, whom I have never rated that highly (he does have an MLS Cup ring, so maybe I have been unfair), has been playing well this year, but let's challenge him. Shoot, shoot, shoot! Oh yeah — on target, please!

Keys for a result:

Look to play direct when its on, turn RSL around.
Find a rhythm, possess the ball when direct play is not on.
Team shape, be difficult to score on.
Break wide, get in the box.
Shoot on target, force a save.
Set pieces, get the match ups right.