Share All sharing options for: Quakes need to bring attitude to DC 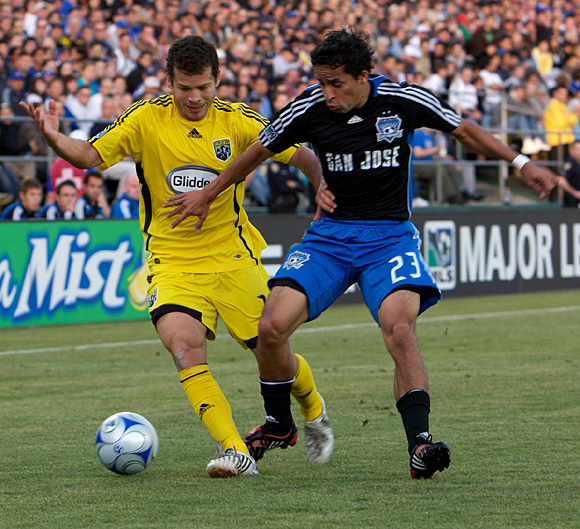 Attitude is everything. How one approaches training and matches goes a long way in getting the desired results. Against Real Salt Lake Wednesday evening, the Earthquakes were forced through injury and a referee's decision to toughen up and play to get a point. A good workmanlike effort. Nothing like having to fight for each other when you need to build team unity. They'll need the same mindset on Sunday at RFK.

DC United, after struggling, is on a bit of a roll. The Brazilian striker Luciano Emilio has scored six goals in the last four matches. The team hasn't lost in four matches with three wins and a draw. United's players are beginning to believe in themselves — throw in a home game against an expansion side and they must be licking their chops. DC is thinking three points, not a penny less.

Tom Soehn will probably use the following line-up against San Jose. In goal, Zach Wells, with Martinez, Peralta, Namoff and McTavish in front of him. In the middle, Gallardo attacking with Clyde Simms doing the dirty work behind him, Fred on one side, and then Soehn will have to pick between Mediate, Dyachenko, and Quavas Kirk. Up top, Emilio and Jamie Moreno.

Zach Wells and company have been easy to score on this year and everyone has been pointing a finger at the keeper. Zach, when in Houston with the Dynamo, did just fine and the turn in form may have something to do with the DC back four. In Houston his back four was as good as it gets, but I'm not so sure about DC's. Peralta plays a cerebral style compared to the aggressive Eddie Robinson. The Colombian Martinez has a great resume but is getting on in years. I think the lack of speed of their back four is a problem.

The strength of the side is their midfield. Simms is a poor man's Rico Clark, playing the midfield muscle which he does fairly well, and unlike Rico, he has a very good shot as evidenced by his free kick goal against the Red Bulls. The attacking role is played by the Argentine Gallardo. I like the way he plays — his teammates are beginning to understand his style, and he is getting accustomed to the MLS's unique style. Gallardo likes to run with the ball and is given the freedom to do so. He generally picks the appropriate moments and makes good decisions.

Fred, I have a difficult time understanding. He plays on the left, although I think he is right footed. I haven't seen him defend a lot so there is always pressure on United left back. Maybe he is doing something effective that I am missing. Early in the season I felt he was holding the ball too much and losing it at critical times. Mediate is pretty much a reserve type player and Dyachenko isn't knocking 'em dead either but he is big and a threat on set pieces. At least Quavas Kirk, if healthy, can provide some speed, so I hope for the sake of entertainment we see Quavas.

Emilio is the guy to watch at the moment. He is an opportunistic type forward. Doesn't overwhelm with speed or a dramatic shot, just seems to be in the right spot all the time. This is what one could call a poacher, or better yet, as Allan Clarke was referred to in his Leeds glory days, "Sniffer." His strike partner Moreno should be done by now but isn't, and continues to be a very productive part of the DC attack. He plays a little deeper nowadays, doesn't have near the speed he used to, but keeps the ball as well as anyone in the league. When the ball is played into his feet, he keeps it. We used to say that trying get the ball off Carlos Valderamma was like stealing a beach ball off him while in a phone booth, and Jaime is like that. He has become a good assist man over the years, too, so San Jose will have to keep an eye on the runners when Moreno looks to spring a teammate.

For the Earthquakes to get a result they'll need the same kind of attitude we saw in Salt Lake. Nothing fancy, ugly if you like, but a point or more is what is needed. RFK is a difficult place to play. The DC supporters are very good and they keep that place rocking. Always loud, sometimes obnoxious, they are perhaps the best supporters in the league.

For a point or three, the Earthquakes have to work very hard, and understand the type of team they truly are. No delusions of grandeur. Play tough, be difficult to score on. Make it a long, frustrating night for DC. When I write "understand the type of team that they are," what I mean is that they can't pretend to be something they are not. Possess when possible, but launch it under pressure! The Quakes lack some of the components to compete for a title, but this doesn't mean that on any given night a win is out of the question. Soccer is a funny game, but attitude is everything!

- Sit in a little, frustrate DC so they get out of shape.
- Put numbers behind the ball and watch the late runners; no ball watching.
- Look to break. DC's defenders lack speed so run at them.
- Stay close to Gallardo, and always know where Emilio and Moreno are.