Quakes could win a point or three from flickering Fire

Share All sharing options for: Quakes could win a point or three from flickering Fire 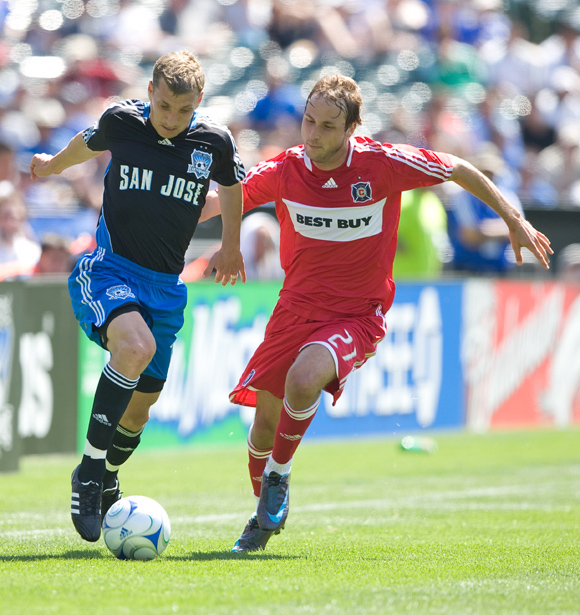 Ronnie O'Brien, right, will be looking to get behind Justin Mapp as often as possible on Saturday night. Photo: John Todd, centerlinesoccer.com/isiphotos.com.

Here's the rub. Dennis Hamlett, the Chicago Fire's manager, has some choices to make. They've lost their last three league fixtures. Saturday night, home field, expansion side, this is a must win. Does he start his captain C. J. Brown, who struggled against Chivas last week? What about Chad Barrett and Tomasz Frankowski, both of whom started the season on fire, so to speak, and have gone cold recently? In fact, Frankowski was on the subs bench last match. I am sure Dennis' counterpart this weekend, Frank Yallop, would like such a problem.
The Chicago Fire have used three in back as well as four, and the constant seems to be five in the middle. With that said I think we'll see something along these lines from Dennis Hamlett: Jon Busch in nets; in front of him, Brown and Bakary Soumare holding down the center with Brandon Prideaux and Gonzalo Segares wide. In midfield, look for Diego Gutierrez sitting in front of the back four with Justin Mapp on the left, the in-form John Thorrington on the right, and Cuauhtemoc Blanco in the attacking midfielder role. Up top, Chris Rolfe and Barrett.

Busch is having a very good year so far, and can pull off some spectacular saves. If he has a weakness, it's probably the balls whipped into the box, as he tends to get stuck on his line looking to make the reaction save instead of clearing the initial service. If C. J. Brown starts this is good news for San Jose, since he needs athletic cover to compensate for his lack of speed. Soumare is supposed to provide that cover. Segares is a hard worker and willing to get stuck in early. Prideaux is steady, if not fast, but his experience keeps him in the lineup.

Chicago shines in the middle of the park. If I'm Denis Hamlett I choose my five best and let them run the show in the middle. Gutierrez sits in and provides the bite, the ever dangerous Justin Mapp goes on the right or left and Blanco goes wherever he likes! Thorrington, like Terry Cooke of the Rapids, is known more for time spent with Manchester Untied than actual minutes on the park for the Red Devils, and he will probably be on the right. Love him or hate him, John is a player without a true position, making it hard for a manager to figure out where to put him. I like John Thorrington but most of the coaches I have worked with didn't.

We all know about Blanco now and the Quakes are going to have to pay attention to him for ninety minutes. He gets the freedom to go where the space is, making him difficult to track. Lose him for a moment and you'll pay the price as one of his superb passes punishes.

Up top I hope we see Barrett with Rolfe underneath. Barrett will be looking to make up for last week against Chivas, where he missed two clear chances, and redemption is a powerful motivator. Chad is good in the box not a real threat from beyond the eighteen. Rolfe plays best as an underneath striker, picking up knockdowns and running at people in the final third. Chris will look to dribble and combine. We haven't seen the best of him this season and he must be hoping for a break-out game.

Should any of the attacking Fire players fail to perform there are more than a few options waiting on the subs bench. Andy Herron got minutes in the last match and can prove to be very dangerous. Frankowski must be struggling in form due to injury or something as he can't get a game at the moment, although he also came on against Chivas. The rookie Nyarko came on as a sub instead of Calen Carr in the last outing which leaves me to ponder just how long will Carr remain in Chicago. I called Ian Russell earlier this year regarding Mehdi Ballouchy, so Ian should be dialing for dollars if Carr does not get on the pitch Saturday evening.

On to San Jose. Seems as though the Earthquakes will get to trot out the first team in this one. The coaching staff will ask Kei Kamara how he is doing and if he needs a break. Kei will surely answer that he is fine and ready to go. With Kamara and Johnson up top, the Quakes have two big targets to use which can cause some problems for the Fire. Possession will be vital and the Quakes have enough quality ready for Saturday night to establish some rhythm. Keeping the ball away from the Fire's offensive weapons is as good a game plan as any. In watching Spain against Russia in Euro 2008, one can see how in just possessing the ball Spain was able to completely dominate a football match against a side that was playing so well. When in trouble or under some pressure, the San Jose defenders should look to play the ball into the channels, have one of the two strikers run into space and hold the ball up. Once joined by a midfielder or two San Jose can look to combine in the middle or kick the ball back out wide and look for service in the box.

The Quakes will need a good team effort to beat the Fire. Chicago is looking to get back on track and the longer the score stays at zeros the more frustrated the Fire, as well as their fans, will become. With a lot of hard work San Jose could frustrate the Fire into giving up a point or three!

My keys for a result:
Possess the ball.
Disrupt Chicago in the middle of the park and play physical — the Fire will!
Keep an eye on Blanco.
Get the set piece match ups right.
Clean sheet. Do not let Chicago score.
Team shape: Be patient, look to break on an isolated Chicago centre back.

(Tim Hanley is a former assistant coach with the Clash, Earthquakes, Dynamo, and Galaxy, and played for the NASL Earthquakes.)