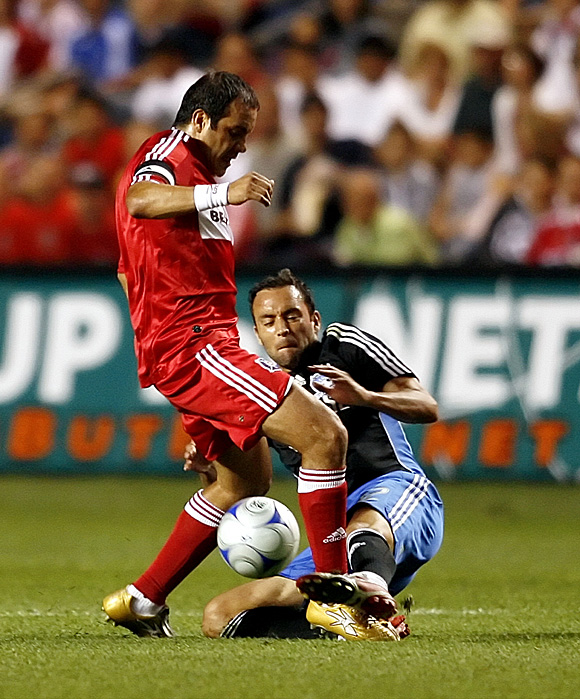 Ramiro Corrales and the rest of the Quakes defended tenaciously to minimize the impact of Chicago's Cuauhtemoc Blanco. Photo: Tracy Allen, isiphotos.com.

They say the goal posts are the keeper’s best friend. Saturday night at Toyota Park, the goal posts were the Earthquakes’ worst enemy, as two San Jose shots banged off the woodwork in a 0-0 tie against the Chicago Fire.

Ramiro Corrales slammed a 20-yard free kick off the cross bar in the 53rd minute, and Shea Salinas hit the post in the 86th as San Jose had to settle for a well-earned point on the road.

"To come here and play like we did, it’s terrific. I think we deserved at least a point, if not the win," said Earthquakes coach Frank Yallop. "For the guys, they’ve worked so hard and actually played really well and not scored. And that’s been our story this year."

The Earthquakes, welcoming the return of Kei Kamara and Nick Garcia to the starting line-up, withstood a rough first-half before almost winning the game outright in the second.

The Fire, after being shut out in their last two MLS matches, started Andy Herron for the first time all season, and seemed determined to get their offense in gear early. 35 seconds into the game, a Justin Mapp cross from the left side was cleared by Nick Garcia, but the ball went straight to Tomasz Frankowski for a clear shot from the top of the box. Quakes goalkeeper Joe Cannon was up to the task, getting down low to his right to make the save.

In the 10th minute, Cuauhtemoc Blanco, again from the left flank, chipped it into the box for Frankowski, whose flick-on header found Herron with his back to the goal. From 12 yards out, Herron’s bicycle kick went straight to the goalkeeper Cannon.

On the play, Herron landed badly, and minutes later was taken off the field. In came Chad Barrett, who had been benched after his poor showing against Chivas USA. But this game would go no better than the last for Barrett. In the 34th minute, he swung at and missed a bicycle kick off a Frankowski chip inside the box. The rest of the match saw an increasingly frustrated Barrett misconnecting with the rest of the Fire offense.

After battling through another MLS expansion team grind in the first half (5 yellow cards were handed out: John Thorrington, Diego Gutierrez, and Gonzalo Segares for Chicago, Kelly Gray and Corrales for San Jose), San Jose had their share of possession, and the better scoring opportunities in the final 45 minutes.

In the 53rd minute, Kamara was pulled down from behind by Bakary Soumare just outside the box, setting up that free kick from Corrales. Corrales’ shot beat Chicago’s Jon Busch cleanly, but was denied by the cross bar.

Cannon had to earn his fifth clean sheet of the season, making a couple key saves to keep the game scoreless. In the 71st minute, Ryan Johnson failed to clear a Blanco corner kick, and the ball fell to Justin Mapp on the left wing. Mapp blasted one from 20 yards out, but Cannon was able to tip it over the bar. In the 75th minute, Torrington pounced on a weak clearance by Gray, and slipped a pass to Chris Rolfe inside the box. Rolfe’s shot from 15 yards out was answered by Cannon’s diving save.

"The team did a good job of limiting their chances and I thought that we were the better team tonight," said Cannon, who was part of the San Jose side that won the MLS Cup in 2001. "We were unfortunate not to win, but we couldn’t capitalize on a slow start by Chicago."

The rest of the scoring chances were San Jose’s, finishing a strong second half. In the 83rd minute, a Ronnie O’Brien free kick found Johnson at the far post, but Johnson’s header from 8 yards out went wide left.

In the 83rd minute, Shea Salinas was subbed in to provide some offensive spark for San Jose, and he almost won the game a few minutes later. In the 86th minute, Ivan Guerrero found Salinas running free down the right side. Salinas’ 20-yarder beat the goalkeeper, but not the left post. The rebound fell to Kamara, 15 yards out and right in front of goal. Kamara had time to trap the ball and set up a shot, but hit it just wide of the left post.

San Jose was gifted one last opportunity to take all three points when Thorrington’s back pass was stolen by Guerrero in the 88th minute. Guerrero seemed in alone on goal, only to have the ball taken away by a sliding Soumare tackle inside the box.

This was the third scoreless draw of the year for San Jose, and their second in three games.

"We have had some meetings recently to assess our play and I think we came out and had a solid performance tonight," said Garcia. "Defensively we played well and did not give them many chances and at the other end, we had enough chances to get a goal, but we just couldn’t get one."

On the bright side, the draw brings the Earthquakes' road record to 2-5-2, giving them a respectable 8 points from their nine matches away from home. "For us being a strong road team is important. We have actually been one of the better road teams in the league this year and we need to keep that going," said Garcia. "Next week we play at Chivas and we need another good result before we hit a big stretch of home games."

The Quakes, now with a total of 12 points through 14 matches, will finish their four game trip next Saturday, traveling to surburban LA to play Chivas USA.