Quakes could profit from Crew turmoil

Share All sharing options for: Quakes could profit from Crew turmoil 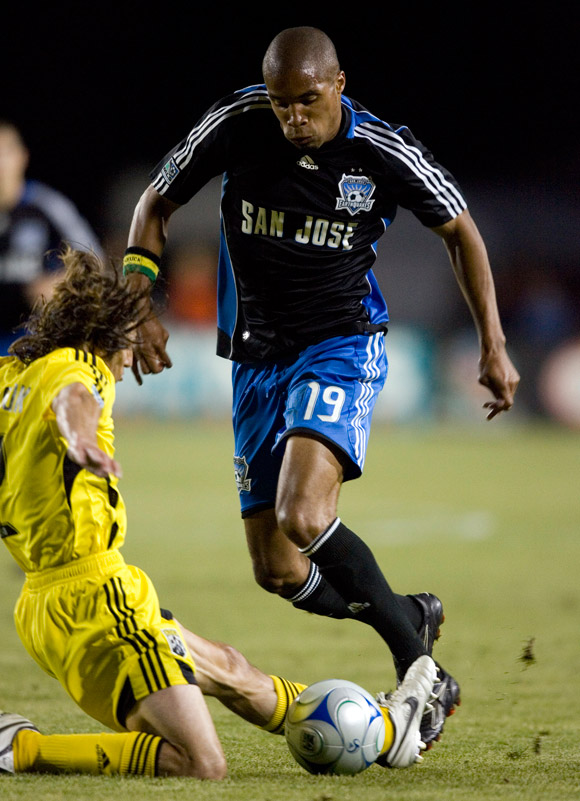 The Earthquakes' Ryan Johnson will get another chance to get the ball past the Crew's Frankie Hejduk on Saturday. Photo: Michael Pimentel, isiphotos.com.

The Columbus Crew are tired. Tired of losing. No doubt tired from running as Sigi has certainly been working the team hard due to their recent performances. After a superb start the Crew have dropped points in their last three league matches. The last one against Chivas in LA was a meltdown. Two goals given up in twenty minutes and then down to ten men a moment later.

They've been running. Sigi Schmid is a task master. The best example I have is this: At the Anschutz "Hemingway Ranch" in Colorado, there is a picture in the library of Sigi's Galaxy working out on a patch of grass next to the bass pond. Traditionally, AEG teams will go to the ranch once every two or three years after a match against the Rapids. They get in late after the match, and then spend one whole day and maybe half of the next playing golf, fishing, shooting skeet, and so on before departing. I know the Gals under Sigi are the only team to ever work out at the ranch during what is usually deemed a break.
Sigi will either keep the team together or he could lose them here. Players will win despite a coach, but at some point they begin to crack. In the Chivas match Sigi subbed Schelotto at halftime. Normally when down to ten men, one might see a d-mid come in for a forward as you move to a 4-4-1 set up. In this case Sigi added an attacking player in Moffat which sends the message that Schelotto wasn't producing. I wonder if his comment after the game, "We played a man down basically the moment we got off the bus," was directed at Schelotto? I think Sigi will keep the Crew on track but another poor performance will make their inevitable return to form that much harder. Having said all that, in the Crew we may be watching one of this year's MLS Cup finalists.

So the Earthquakes got the Crew right where they want them! Not so fast. The Crew played better football in the second half against Chivas. Maybe Chivas took their foot off the pedal but the Crew did not give up. I think Columbus will come out storming with a lot to prove. They will be clearly looking at 3 points and nothing less.

Columbus will have to replace O'Rourke (red card suspension), so maybe we'll see Iro the big Englishman next to Marshall, with Ezra on the left and a jet lagged Frankie Hejduk (England-LA-Spain-Columbus!) on the right. This is a pretty darn good back four in my opinion. Adding the solid Hesmer between the sticks makes a good five. Columbus shines in the middle of the park. Carroll plays nice and simple (great pick up by Sigi), Gaven and Rogers on the flanks, and I hope we see Brad Evans again. Up top we'll see Alejandro Moreno of course but does Sigi go with Schelotto? We'll know if the dog house has a swinging door if Schelotto starts. Look for the dynamic Ekpo to sub in two thirds through and maybe the young forward Lenhart. Columbus, unlike some teams, has a distinct style or vision as to how they want to play. The Crew try to keep a balance with Ezra sitting back more now (with age he no longer bombs forward as often as he used to), while Rogers probes forward. Gaven tucks in allowing Frankie Hejduk space. Moreno remains the hold up guy, buying time and space for his teamates. Schelotto, if he plays, can slow it down or play quickly through transition, which I think he prefers. The Crew play a classic old school, up-back-and-through style. Up to Moreno, back to Schelotto, through to a wide player or as we saw at Buck Shaw, a late runner in Evans. In order to have success in this style possession is vital. Sometimes just to have your opponent chase for a while until pulled out of shape allowing for a quick strike through a lightning transition.

So, what does San Jose need to do to have success in Columbus? I would love to see Ramiro and Gray side by side as defensive mids. Make it difficult for the Crew to play in the middle through Schelotto. Maybe Kirvoski in front of them with Johnson doing his best battering ram impression. Ryan will be surrounded by some big guys so maybe push the ball to the flanks to pull Marshall out of the middle. Long balls played in the air will come right back at you. I think Salinas should start on the right if only in the hopes that, like Ian Russell, he will turn it on next year. Ian was superb in 2001 after logging tough minutes on Lothar Osiander's 2000 side that is shockingly similar to this year's version. O'Brien can play on the left and balance out the side. I wanted to see this in Salt Lake but thankfully my editor here sent me the Quakes makeshift line up just prior to my little story going to press. My line up here is pretty much a 4-5-1. I know, UGH — the 4-5-1 has a bad reputation. But think Senegal v France in World Cup 2002. One shot, one goal, game over. Think Man U vs Barcelona in Spain during the first leg Champions League Semi. Ugly but effective, and Man U are now champions. Eddie Johnson nearly scored against Spain after a clearance and one pass. I don't like one forward line-ups but let's be realistic. The Earthquakes must leave Columbus with at least a point. Don't let the Crew play; sit in, do not go out and pressure them high in their end. When the Crew do find their wide players, and they will, don't step in but delay. San Jose's central defenders and midfielders must pick up runners in the box and beat them to the ball. Sounds simple but against some good players this will be a tough 90 minutes.

My keys for a result:
Shape—defend with six, attack with four. Your opponent can't win if they don't score!
Sit in to frustrate a Crew team desperate to impress.
Set pieces. The Crew have size and quality; add good service and look out. Sort out the match ups and jump early!
Look to score on the break.

(Tim Hanley is a former assistant coach with San Jose, Houston, and Los Angeles, and also played for the NASL Earthquakes.)