Mile-high Rapids will pose a challenge for San Jose

Share All sharing options for: Mile-high Rapids will pose a challenge for San Jose 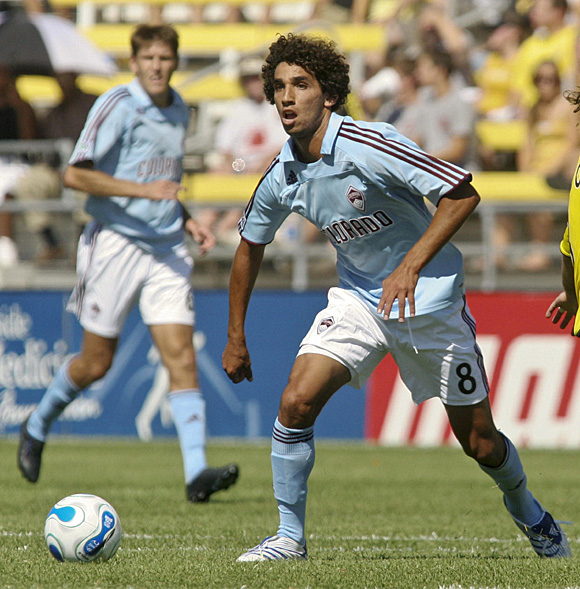 I just took a quick look at my Center Line Soccer pre-match analysis of April 17th for the San Jose-Colorado match. The Earthquakes were able to go up to Colorado and get a great result. Some things have changed since then, though, primarily with the Rapids and their starting eleven.

The Colorado Rapids are in the enviable position of having their top 15 players healthy. Few clubs in Major League Soccer could say as much at this point in the season. Fernando Clavijo has all his options available for Saturday night at Buck Shaw.

In the match back in April, Fernando used four in defense with Kimura, Keel, Burciaga and Erpen. Only Erpen remains a starter. Clavijo used five midfielders and one forward on that Saturday night. Since then the Colorado coach has gone to three in back, with five in the middle and two up top.

Starting for the Rapids in their 4-0 win against New York last week we saw Bouna Coundoul in nets, Ugo Ihemelu, Pablo Mastroeni, and Facundo Erpen in defense, Terry Cooke wide on the right, Colin Clark on the left with Nick La Brocca holding and Mehdi Ballouchy and Christian Gomez attacking from the midfield. Up top, a now healthy Conor Casey and the Scot, Tom McManus. I say Ballouchy was attacking although Clavijo probably told him to hold with La Brocca. We should see the same line up from the Rapids as one would be foolish to make changes after their convincing win against the Red Bulls. I should note that Clavijo has made some interesting line up moves in the past and may opt to play Mike Petke in defense and push Pablo in to the midfield or leave him in back and play conservative with four. Now healthy, Petke got 45 minutes the other night in a friendly against the Mexican side Tigres.

In the Red Bull match, Fernando pulled Conor Casey after the first half, opting for the speedster Omar Cummings. Halftime substitutions are interesting. Casey is not listed as injured, the score was 2-0 at the time and an attacking player was subbed on. One could assume that Conor was not performing well enough or maybe he did take a knock. Clavijo has even more choices — Jacob Peterson is healthy as well and can play wide or up top, as can early season starter Herc Gomez. There is no sane reason to sit Mehdi Ballouchy, who first came to prominence while playing for Santa Clara, as he was superb in the New York match. Mehdi was riding the pine and I had high hopes he would continue to do so, opening the door for San Jose to nab him. If he is not starting at Buck Shaw Saturday, the Rapids should get a phone call. I'd also inquire about Peterson while I had them on the line.

Let's take a look at the Rapids. In a conversation I had the other day with former Clash netminder Dave Kramer, I jokingly said, "Good luck with 'Bouna time.'" David is the new keeper coach at Colorado and he will have his work cut out for him. Bouna is an enigma. He gets trapped on his line too often, makes saves that most fans think are fantastic and yet I am not impressed. Sort of like Jorge Campos, too much flying around, guessing, etc. If Dave can do one thing, it might be just improving Bouna's distribution. In addition to being a very good keeper (stuck on a poor side), Dave was great at kicking the ball and Bouna can't.

The Rapids back line is a combination of athleticism and experience. Pablo is superb when he wants to play and in that he is now looking to go overseas, he may be looking to impress those that have come over to watch. Ihemelu is the athlete, very fast and very strong. Prone to giveaways and silly fouls, the Earthquakes would be well served to keep the ball on his side. Argentine Facundo Erpen likes the ball, fancies himself a player, and I think enjoys play-making instead of defending. As I said in the pre-match from April, run at him. Kei Kamara did just that, and scored.

Colorado has one of the league's best in Christian Gomez. He came off at 52 minutes in the last match but unlike the Conor Casey sub, the score was 3-0 at the time and Gomez has just come off the injured list. He is their danger man and is always exciting to watch, loves the ball and deserves to see a lot of it. He is a superb passer, has a great shot and I think I saw him nearly score with his head last week! Didn't know he could do that! Terry Cooke we know about — good crosser of the ball but doesn't get behind the defense very often. Colin Clark, on the other side, is a different animal. He loves to dribble and can be very dangerous. The Rapids' first goal last week came from a Clark cross and the third was a brilliant solo effort from the young winger. I am impressed by his play this year. La Brocca will hold although he does drift forward and we should see him paired with Ballouchy, who will no doubt be told to sit in a little, but Mehdi doesn't sit — he loves to get forward. His goal last week was excellent, as was his passing.

Up top we should see McManus again and I would venture to say Conor Casey with Omar Cummings the sub. Tom McManus and Conor Casey are a little too similar for my tastes, both playing the target forward role. I prefer a target with a speedster underneath. Think Crouch-Torres for Liverpool. McManus is good in the air so San Jose will need to limit the service he gets. If Cummings gets on, which he will, watch out. He's fast and completely inconsistent. He requires about three clear chances to score one. Cummings is similar to former Quake Jamil Walker.

Colorado's strength lies in their wide play. Because both wide mids are in form, opponents have to commit bodies to the flanks. As a result, the middle opens up, and with players like Gomez and Ballouchy, teams can get torn apart. Look for Colorado to push the ball up the floor to a forward, pick up the knock down, and pass the ball wide to Cooke or Clark, and then crash the box. If they have a weakness or flaw in their style, they tend to play too direct and should look to possess the ball as there is enough talent in the side to do so. In addition, when an opponent plays with three in back, there are opportunities to isolate strikers one on one. No one is going to out run Ugo, but Erpen can be exposed.

For the Quakes to get a result Saturday night, they'll need to possess the ball, which will not be easy. The center of the park will be crowded, requiring quick one- and two-touch football. San Jose hasn't shown a great possession game to date. Ramiro Corrales and Ronnie Brien have the quality but it is up to their teammates to step their game up. If the Rapids keep nicking the ball from San Jose, it will only be a matter of time before Colorado scores. Limiting service to the Rapids forwards will require a lot of work. Step up on Cooke as he doesn't run by anyone. and push Clark towards your supporting teammates. Most teams foul Christian Gomez to slow him down and I would imagine the Quakes will do the same. Hopefully away from the box!

In the attack, the Earthquakes will need to isolate and attack the Colorado defenders one on one. Balls played out of the back into the corners can work if the runs are made early and often. I don't think there will be much joy in the middle of the park, so after winning the ball look to pounce on the space the Rapids have left, which will be behind Clark and Cooke. Ugo and Pablo tend to foul in dangerous spots, so the set pieces cannot be wasted.

Shape. Stay compact, make it difficult for the Rapids to break through.

Stay close and mark the Colorado forwards tight. Jump early and challenge everything.

Quick passing in the middle — don't dwell on the ball.

(Tim Hanley is a former assistant coach with the Earthquakes, Dynamo, and Galaxy, and played in goal for the NASL Quakes.)