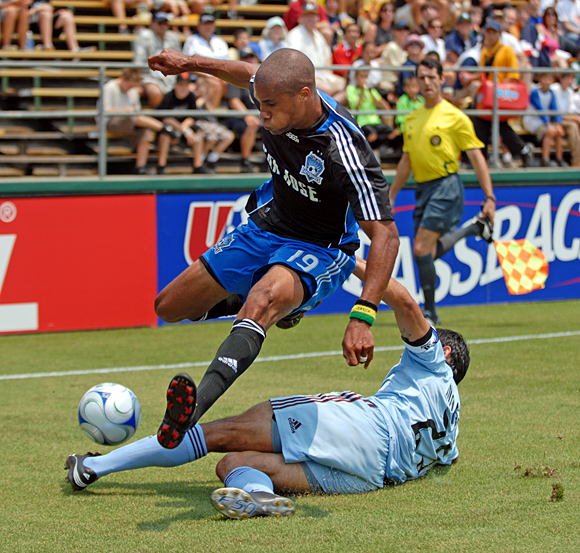 Ryan Johnson's set piece goal was not enough for an Earthquakes victory against the Rapids. Photo: Joe Nuxoll, centerlinesoccer.com/isiphotos.com.

A controversial non-call on Conor Casey led to his game-tying goal in the 69th minute as Colorado fought back to a 1-1 draw with San Jose Saturday afternoon at Buck Shaw Stadium.

Just seven minutes after the Earthquakes had taken the lead on a Ryan Johnson goal, Terry Cooke lofted a forty yard diagonal ball into the box for Casey. ”I looked at it again on tape,” Yallop said. “From the angle I was at, (Casey) pushed (Hernandez) in the back. You can’t do that in this sport. Jason feels the hands on his back and bends over, and it ends up a free header.”

The play infuriated Yallop, who ended up being ejected from the game for arguing the call from the bench. This was Frank Yallop’s 163rd game coaching in MLS, and the first time he’d ever been ejected. “I got thrown out with Canada once. I don’t get angry very often, but I struggled with that one.

“I swore a little bit,” Yallop later admitted. “Stuff like that, you get frustrated. If they score a good goal, then fair enough, but if it is a foul then I’m disappointed in the ref and the officials. I didn’t see a clear picture of it, but when I looked at it live, it looked like a foul. That’s why I went nuts. No one seemed to make a decision, including the referee and the linesman, who was on our side (of the field).

“We didn’t lose, that’s always a positive, but I felt it was one that slipped away today.“

With news of the signings of Darren Huckerby and Francisco Lima buzzing through the stands, the Quakes spent the first half reminding everyone of their desperate need for some quality up front.

In the 11th minute, Kei Kamara somehow fought through Nick LaBrocca from 15 yards out to flick a shot on goal, but Rapids’ goalkeeper Bouna Coundoul was up to the challenge and made the save. In the 25thth minute, when Pablo Mastroeni misplayed a pass, Ryan Johnson chested the ball into space and had a wide open shot from 18 yards out, only to miss barely wide right. minute, a Kei Kamara cross from the left side end line deflected out to James Riley for an open shot from 25 yards out, but his blast was tipped over the bar by Coundoul.

Just before the first half ended, Ryan Johnson, from the right top corner of box, lofted a cross to Ivan Guerrero charging in from the left wing. Guerrero had trouble trapping the ball and couldn’t get a shot off. “Ivan should’ve scored, to be honest,” Yallop later said. “He tried to bring it down, when you just volley it in and it’s a goal. (We would have gone) in at the half 1-0, though we’re not playing well, and it makes a big difference. We seem to be just stuttering around goal, and that’s the frustrating part about it.”

On the defensive side, as usual, the Quakes looked a lot stronger. “I think the game showed we can shut a team down pretty well, limit their chances,” Yallop said. Colorado’s best first-half chance came in the 12th minute, as Conor Casey beat Eric Denton to a long through ball up the middle and broke in alone on Joe Cannon. Casey’s shot from the top of the box barely missed wide left.

Despite their struggles offensively, the Earthquakes looked ready to win the game off a set piece goal in the 62nd minute. Ramiro Corrales hooked a forty-yard free kick into the box where Ryan Johnson beat Ugo Ihemelu to the ball and slammed home a header from six yards out. “Good goal,” Yallop said. “We're dangerous on set pieces. Ryan’s a brave man, Ramiro puts a great ball in and it’s a good finish.”

The happiness that swept through the stadium following that goal was quickly negated, however, by the Casey goal seven minutes later. Joe Cannon said of the play, “I didn’t get a good look at it. I was following the ball, and first thing I knew it was redirected back the other way and as far as the foul goes, I didn’t really have an angle on it. That’s the way it goes. When the teams’ struggling, you don’t get calls.

“But you’ve got to play good enough,” Cannon continued, “and you’ve got to take care of the ball, and come out better than we did today. We can blame the referees all we want, but the fact of the matter is if we come out and play to our potential then we don’t have to worry about other things like refereeing.”

Yallop summed the afternoon by saying “A draw at home, a game we’ve got to try and win. We were in a great position to do that, I thought we played pretty well (in) the second half. The first half wasn’t very good. But another two points lost, really.”

Yallop on the imminent signings of Darren Huckerby and Francisco Lima: “It’s all done, but I can’t really announce anything. The Huckerby thing’s done, and Lima’s done, but we won’t be making any statements on that until we get full confirmation from the league that they have actually signed, and all that stuff. But we’re excited. We’re going to hopefully add another couple of players in the next 48 hours, if we can, or close to it."