Dichio's absence could cause problems for Toronto

Share All sharing options for: Dichio's absence could cause problems for Toronto 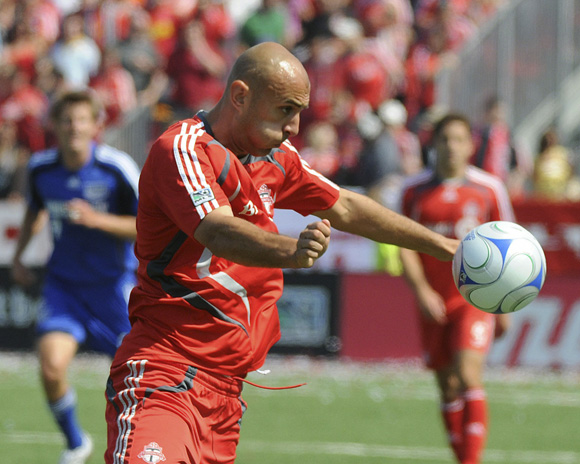 With target man Danny Dichio out with a concussion, Toronto will be forced to make some changes to their front line. Photo: Nick Turchiaro, isiphotos.com.

Jon Carver, Toronto FC's English manager, has a winning line-up — he just hasn't used it often enough.  Carver prefers a 4-5-1 and has the bodies to play it although injuries, a few international call ups, and too much tinkering has cost him.

When they win, we see Greg Sutton in nets; defending in front of him, we have Marvell Wynne on the right, Jim Brennan on the left, and Tyrone Marshall and Marco Velez as twin center backs.  The five in the middle consist of Maurice Edu and Carl Robinson sitting in, Rohan Ricketts and Laurent Robert wide, with Amado Guevara high just underneath Danny Dichio.

The injuries, call ups, and the manager's preferences have kept the line up changing ever so slightly. Carver has tried three or four different back line combinations, inserting Todd Dunivant at left back and Julius James or Olivier Tebily in the middle. When Guevara was away with Honduras, Carver used a 4-4-2 with Jeff Cunningham or Jarrod Smith up top.

This week it appears Edu has to sit (suspension), and Dichio (concussion) will be out as well.  Tebily returns after missing the last few games due to injury and may be available for Saturday, although his last outing was anything but spectacular as his insertion in the line up due to a Marshall injury resulted in two goals against in a 3-2 loss.

Let's take a look at TFC.  Greg Sutton has always been an MLS caliber keeper but due to the foreign roster spot restrictions of the last few seasons he remained in the A-League or USL-1. Greg was always on my short list as a potential signing. In fact, years ago in San Jose we considered bringing him in but couldn't work a deal out. Sutton sees a lot of shots and has been up to the task in the last two seasons.  Tall and commanding in the air, he is one of the better keepers in today's MLS.

In front of him we should see Velez, the 28-year-old Puerto Rican, another A-League standout.  Joining Velez, Tyrone Marshall.  Love him or hate him (Earthquake supporters no doubt opt for the latter), he remains one of the best in the league in his position.  Big, strong and aggressive, he commands respect and let's be honest here, you would love to have him on this year's San Jose backline.  Tyrone is slower these days and is prone to the heavy challenge, which could result
in a very important set piece opportunity. Brennan on the left is really a midfielder but clearly Carver is trying to put his best eleven on the floor. Dunivant has not been in favor for what seems like  years now. Wynne is fun to watch — fun in the train wreck sense.  He can absolutely fly — what is lacking in his game is touch.  Marvell's end result is too unpredictable as he can get forward but the cross is frequently not up to par. He defends through his athletic ability and could really turn into quite the player if he works on the technical aspects.

Toronto's midfield will be without Maurice Edu due to his yellow card accumulation, so look for a pairing of Canadian hard man Kevin Harmse and the Welshman, Robinson, to hold down the middle of the park.  Kevin can be an absolutely great defensive midfielder if he can get hold of his emotions.  He is big, strong,  has good feet, is a  tenacious tackler of the ball but prone to reckless tackles. If Kevin can stay in check, he could be a force in this league for a long time.  Carl Robinson is one of their fancy players brought over from Norwich for a lot of money and a lot of salary.  Initially the deal turned a few heads, but I don't see enough production from him to warrant the expense.  Out wide, Toronto has Ricketts and Robert.  Both players list some big clubs in their CV's but Ricketts didn't see much time with Arsenal or Tottenham and now at twenty five it is clear he was seen as potential that was never realized. Robert, on the other hand, did play in the big time, at Paris Saint Germain, Newcastle (Carver connection), and Benfica.  Renowned for his powerful shot and quality set piece service, Robert is a threat is some ways.  At 33, though, he is too old for the athletic league called MLS.  Ricketts and Robert are 60 minute guys for different reasons — Ricketts due to his production and Robert, his age.

The playmaker Guevara is happy, we can assume, and back in form.  He is the danger guy.  Amado, like Christian Gomez of the Rapids, has to be watched.  Up top, Carver has to make some choices.  Since Dichio, their big target forward, can't go, we may see Jeff Cunningham, or  the Kiwi Jarrod Smith.  New signing Abdus Ibrahim is also a possibility, although I think we'll see him come of the bench.  Smith is a target-type forward while Cunningham is a runner.  I can't imagine starting without Jeff Cunningham on the pitch but one never knows.  Jeff has a personality that tends to rub people the wrong way but I would take him on my team.  I think I would tell my players "good roads, good weather," and stay clear as Jeff could score 20 for us if we play nice.  I like him and hope he starts.  Ibrahim hopefully comes on as we don't often get to see a 16-year-old on the pitch.  He subbed on against Chicago and scored.  He also started and played sixty minutes in a friendly against the Argentine club Independiente a few nights ago.

If Carver continues to play a 4-5-1 and Smith is the target, Toronto will find it very difficult to score.  Dichio plays an aggressive and powerful game that draws a lot of defensive attention, allowing others to join and pick up scraps.  Smith cannot match Dichio's effort.  Cunningham, on the other hand, changes the face of the game.  His somewhat nonchalant attitude is deceiving.  Offside, testing the line, seemingly disinterested, but lethal in a moment.

The Earthquakes will be walking into the lion's den in Toronto as the team's supporters are perhaps the most enthusiastic in the league.  I'm not sure if it's the confines, the loads of beer, or just a Canadian thing, but the stadium atmosphere rocks in Toronto.  In addition to the raucous fans, the Quakes will once again have to deal with an artificial surface.  This surface is better than Salt Lake's Eccles Stadium, but fake grass is, regardless of location,   just lousy.  For the Quakes it could also spell line up changes as well.  With points in dire demand no Earthquakes should be allowed to take this night off but we'll see.

Tactically, in the attacking third, few things should change from last week's match against Colorado.  San Jose needs to continue to play to their strengths, which are limited but include counter attacks and set pieces.  Possession was not good against the Rapids so I don't expect we'll see a lot of the ball in Toronto. So, play quickly in the crowded middle of the park, pass into the channels, with early runs from the strikers.  If possible run at Tyrone and force him to commit, possibly gaining a set piece or even a penalty.  When Wynne takes off, as he does,  and losses the ball, as he does, exploit the space he left behind, but hurry because he tracks back faster than anyone in the league.

Besides Scott Sealy, who may start or come on for Kei Kamara either at the half or the 60 minute mark, I would be surprised to see the Quakes' new signings in this match.  If winning, I wouldn't change a thing.  If losing by more than one goal,  why risk injury to a player that hasn't played a match in a while? Maybe we see Darren Huckerby for a few minutes but I doubt it.  The subs will all be mapped out based on timing and match scoreline prior to kick off.  In other words, Ian Russell will have his list of possible subs,  and their entry time subject to the scoreline.  The only surprises are injuries and cards, but these are mapped out in a way as well.

Defensively, keep an eye on Amado Guevara.  He will cheat,  much like Preki used to do.  He won't come back and defend.  He stays high and when the ball turns over he has wandered off, found space for himself and will look to receive an outlet pass, and split the defense with a through ball to a sprinting Jeff Cunningham.  Robert and Ricketts are on the floor to provide service but without Dichio they will look to be more involved and possibly higher up the floor.  If San Jose can keep the ball a little it may pin those two back and limit their contributions.  The 4-5-1 is set up to control the middle of the field and works as a counter attacking form tactically, so San Jose would be well advised to remain patient and work to frustrate Toronto.  Play the ball into corners and turn their defenders around.  Make them chase back, facing their own goal.  Watch for the quick outlet and counter from TFC and stay with runners when they do get forward.  Toronto has not lost an MLS match at home in a long time so the approach must be for one point, looking to steal two more.

My keys for a result:
Defend like champions, 90 minutes. This match will be physical.
Set pieces are crucial.
Counter attack.
Pay attention, be aware, and do not get pulled out of shape.

(Tim Hanley is a former assistant coach with the Earthquakes, Dynamo, and Galaxy, and played in goal for the NASL Earthquakes.)