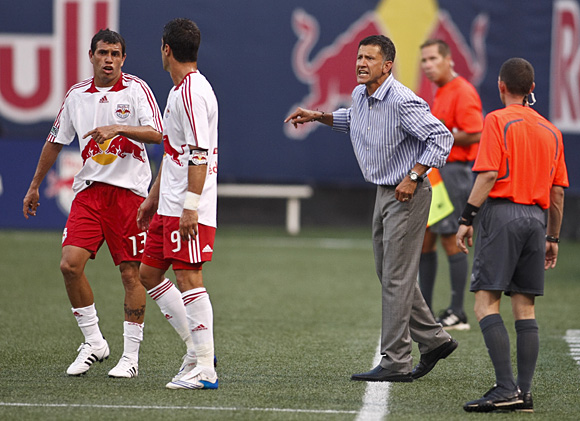 New York Red Bull manager Juan Carlos Osorio has made some noise recently.  Notably, in the media,  he has called out his players and a standard of play he is less than satisfied with.  Unlike John Carver, the Toronto boss who recently named names, Juan Carlos has used the sweeping generalization method.  In previous pre-match write ups,  we've touched on coaches "losing" their team, and Juan Carlos is dangerously close at the moment.  In pre-season he had the team change from their 2007 4-4-2 format to his preferred 3-5-2.  Style of play and/or formations are based on the players available and Juan Carlos must have felt his group of players would fit the system.  Well, half way through 2008, the Red Bulls' record sends a different message.  So what did he do? Changed back and forth between a 3-5-2 and a 4-4-2 and then blamed the players.  Coaches are ultimately responsible for everything that happens on the field.  If the players weren't good enough in preseason, why did they make the roster?  I know the Red Bulls have suffered from injuries — Claudio Reyna, Dane Richards (again), Juan Pablo Angel — but I don't see the league's best coaches making excuses.  Sometimes after all the hype and finger pointing, one needs to take a long look in the mirror.

This is what I think we'll see Osorio trot out this weekend at Buck Shaw: Jon Conway in nets with Jeff Parke, Andrew Boyens and Kevin Goldthwaite in front of him.  In the middle, Seth Stammler and Carlos Mendes sit in front of the back three, with the newly acquired Venezuelan Jorge Rojas as the attacking midfielder. If Osorio goes back to a 4-4-2 we might see Hunter Freeman step in as a defender, making it four in back, and one of the defensive mids sits. Richards is injured so van den Bergh, who has played in nearly every position this year, might start in Dane's normal spot, wide right, with another new addition, the Argentine Juan Pietravallo, possibly playing wide left.  Up top, I expect the Colombian duo of Juan Pablo Angel and  Oscar Echeverry.

In former Quake Jon Conway, we have an MLS vet who, despite some criticism (unfair I believe), has posted some very good numbers in the last two years with a team that really hasn't been very good.  He is right at the top of the New York keepers' stat heap now in some categories that do make a difference, like shots seen and saved.  Save percentage can be a  good indicator of quality. Jon's is good.  His defense might be the reason he is seeing more than his fair share of strikes. Kiwi Andrew Boyens is wooden, to use one of my favorite phrases, so the Quakes should run at him — please.  Jeff Parke I like, he plays the game right and is underrated. Former Quake and NorCal guy Kevin Goldwaite is another underrated player.  Yes, he makes some gaffes, but I am glad he is in the league.  Kevin has worked on his game, is better in the air than when he came up, suffers less loss of possession, and remains very good getting forward. So maybe it is just playing with three that's causing New York's struggles, as Parke and Goldthwaite do decent work.

Seth Stammler and Carlos Mendes, the two defensive mids, do their job decently and seem to be so similar in style they could trade jerseys and it might take me a moment to notice.

If healthy, the Red Bulls can shine in the attacking end of the pitch.  The loss of speedy/tricky Dane Richards is gonna hurt but now we get to see newly acquired Peitravallo!  I am assuming here that Juan Carlo Osorio will insert all of his new signings.  One can 't moan about his players and then when he gets some replacements leave 'em on the bench.  Pietravallo I know nothing about — he played one minute in New York's last match, so the book is out.  Van den Bergh likes it out wide and is most effective there.  He is in form, with five goals  and a couple of assists so far in '08. San Jose would do well to take away his passing angles and force him inside towards support, not allowing him an opportunity to cross the ball.  Attacking mid Rojas notched two assists in his MLS debut match, so look out!  Personally, I can't wait to see the Rojas-Angel-Echeverry combo, but I'm getting ahead of myself!

Up top, the combination of Angel and Echeverry is going to be fun to watch.  Juan Pablo Angel is class and clearly the danger man.  Everything he does is professional. When heading the ball it goes as it should — no questions!  When he strikes the ball, it is clear the player behind the shot is not an amateur. Most importantly, his runs are well timed and intelligent.  Echeverry has started seven games, appeared in nine, has four shots on frame and none have gone in. Um, coach's favorite?  Seems a long leash to me as those numbers usually get you a rest.  We'll see.  When New York sold Altidore they conceded a playoff berth.  The Red Bulls have the quality to make a run but the postseason rests on Juan Pablo Angel's shoulders.

For the Quakes to get a result they'll need to be very aware of Angel's movement and do everything they can to limit service into the box.  How?  Push Rojas into his own end.  Force him to play ineffective balls side to side.  To do this, San Jose will have to have someone — Lima? — sit on Rojas.  Make everything difficult, follow him to the snack bar if he heads that way.  Angel has to be marked intelligently.  Too close and he'll turn you as he is strong.  So keep a little distance, arm's length — he will not out run anyone.  He is so dangerous on set pieces it seems placing two players on him would be wise!  Can't be done, though, so just challenge everything that comes his way. If he is standing over the ball he is shooting — just know that. As mentioned, van den Bergh likes it out wide so force him inside to take away his effectiveness.

In the attacking end, look to take the space Goldthwaite leaves after venturing too far forward.  If New York plays with three in the back, San Jose must work the ball into the corners with good early runs just behind New York's wide players.  Isolating a forward one on one will be very effective.

Keys for a result:

Track Angel for 90 plus.
No silly fouls near the box.
Break quickly into channels, crash the box.
Work hard to pressure the Red Bull, do not let them possess the ball and get a rhythm.
Defend like champions.
New York gives up a few shots — finish them.