Earthquakes' opportunity begins with winning the midfield versus L.A.

Share All sharing options for: Earthquakes' opportunity begins with winning the midfield versus L.A. 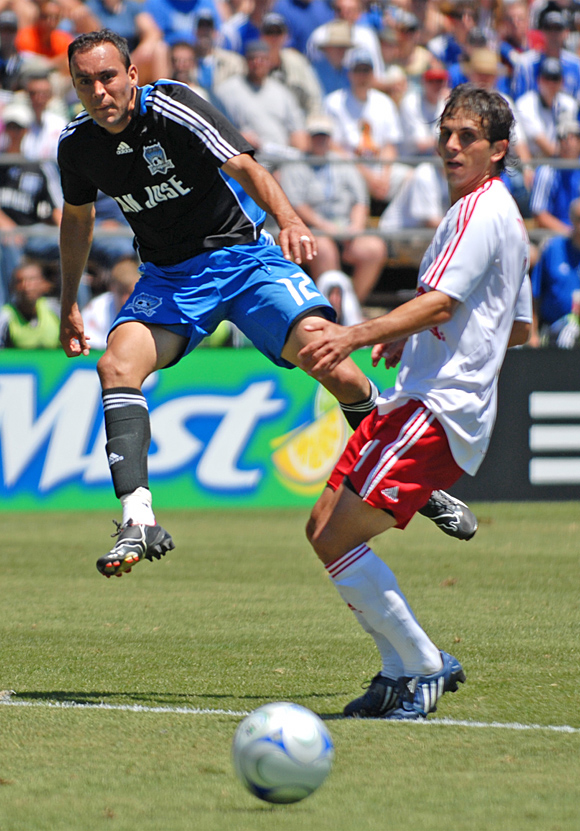 San Jose's ability to attack through the center of midfield from players like Ramiro Corrales, above, may play a key role in getting a result on Sunday. Photo: Joe Nuxoll, centerlinesoccer.com / isiphotos.com.

The L.A. Galaxy. Been there, done that.  Seen Becks, think Landon is the best player we've ever produced, still can't get my arms around Carlos Ruiz even though off the pitch he is truly a nice guy.

The Coliseum in some ways is more difficult a venue for San Jose than Los Angeles.  The Galaxy are comfortable playing in any and all sorts of environs.   The David Beckham scene no longer affects the players.  Some might still struggle — you know the ones, seemingly always in camera frame — but the rest, well, they are more concerned with being on the roster by year's end. Oakland represents just another day in the soccer travels of MLS's most recognized team.

Rudd Gullit has other concerns.  Ruud found himself completely overwhelmed by FC Dallas last week, and I see two reasons why: The Galaxy's star players were tired and their midfield lacks.  When your line up is comprised of two different teams, the haves and have nots, the team will struggle when the stars don't bring home the bacon.  One can't depend on the others to make up the slack.  In the middle, more so when playing a 4-3-3 or 4-4-2, fantastic players are required.   The Galaxy have some real quality but not in some of soccer's most crucial positions. Without a defensive midfielder that can cover ground the team will attempt to provide cover, which essentially means pinching in when not in possession and at times not getting wide and forward due to a lack of trust.  Lack of trust means the player in possession keeps making poor decisions with the ball.  Trust is everything in soccer!

Let's take a look at the Galaxy and we'll come back to some of the specifics.  In nets, we have Sacto product Steve Cronin, and in front of him we should see Chris Klein on the right, Ante Jazic on the left, with Argentine Eduardo Dominguez next to Greg Vanney in central defense.  Pete Vagenas is the holding mid, Brazilian Alvaro Pires in front of him with David Beckham on the right and  possibly Landon Donovan wide right.  Up top, Buddle and Ruiz.  On paper, this is a very good looking line up.  Every MLS coach pines for players resembling just one of these four: Becks, Donovan, Ruiz, or Buddle.

Cronin, like the rest of the group, has been riding this roller coaster of impressive goal scoring bonanza results as well as the incredible dips called lopsided losses.  He hasn't had the same back four very often but Steve still needs to address some areas of his game.  Steve tends to parry back into danger, which I mentioned in a previous pre-match report.  In addition, he seems to drift at times, putting himself in odd spots or positions.

The back four we know pretty well.  Chris Klein loves to get forward and is a good crosser of the ball.  This dimension has actually provided him, as well as Beckham, some real joy on the right side.  Klein keeps the defense honest, so to speak.  One can't just let him run free as his finished product is very good.  Jazic on the left I still like a lot.  Not many goals come from his side although due to recent injuries he seems to be struggling a little in getting his form back.  Lucky for San Jose here!  Vanney and new signing Eduardo Dominguez have some explaining to do.  Vanney we know is not on the pitch for his speed but rather his judgment and quality balls out of the back.  So is Dominguez the athletic cover?  Can't be.  Did LA just sign a younger Abel Xavier?  For what is worth, I liked Xavier.  Here's the MLS formula for success: When playing with four in the back, experience (read, maybe a little slow of foot) is good as long as athletic cover  (read, young) is provided.  Califf-Robinson.  Agoos-Dayak (not young but oh boy, athletic). A passer and a cruncher if you like.  Well, Dominguez got a baptism by fire in Dallas that had nothing to do with the temperature guage reading 102.  We'll see how he adjusts this week.

In the middle of the park, we know everything one could possibly know about David Beckham so let's look at the others.  Pete Vagenas at holding mid no longer does the trick. Vagenas cannot cover the ground needed, forcing everyone around him to support in defensive posture.  The Brazilian Pires is just not good enough with the ball — why did they sign him?  So without trust in the middle, getting forward becomes stilted, not spontaneous. Pires was subbed at half last week and that may signal a change for this weekend.  Sean Franklin came on but I think a better sub would have been Ely Allen, even if that forces Donovan or Beckham into the middle.  If Landon is wide, that is exactly where the Quakes want him.  I recently asked Jeff Agoos to describe Landon in one word, and his reply was, "Lethal." I agree, and the further away from the goal, the better for San Jose.

Up top: Buddle and Ruiz.  Great combo on paper.  Edson is still in form, registering with Landon LA's only shots against Dallas.  Edson does nearly everything well right now and brings a lot of confidence to his position.  Ruiz is part hold up guy and poacher at the same time.  When his teammates are moving the ball well and involving him, he is happy and can be very productive.  The opposite is also true — he can disappear from a match when things aren't going his way.  Look for Ruiz to join in the middle of the park, lay the ball off, turn and hurry into the box looking for the vaunted Galaxy service.  If one can imagine the Galaxy with a quality play maker like Ronnie Ekelund, the ball would get pushed back to him, he would choose between playing Buddle through, or moving it quickly wide.  The Gals lack this kind of player, thank goodness.

OK, now to the Earthquakes.  I get the sneaky feeling that like his counter part this weekend, Frank Yallop would love to play a 4-3-3.  I don't think it can happen yet as too many new faces are in the line up and if things went sideways,  well, it would be difficult to recover.  Last week's line up against New York is pretty much what we'll see for the rest of the season. Arturo Alvarez will initially spell Darren Huckerby and possibly Scott Sealy.  I think Darren wilts at around 65 minutes until he gets fit and Ryan Johnson is needed on set pieces, so Sealy is out even though the better forward.

I was surprised to see Kirovski for Francisco Lima last week instead of Kelly Gray.  Not sure what's going on there as I thought Ramiro was effective in the attacking role. Lima I am not sold on.  Ramiro is a better soccer player straight up.  The Brazilian needs to get on the ball more and be a little more careful with his passing.   In an ideal world, think Pirlo of Italy: always collecting from the back four and looking to get the ball forward.  Ramiro Corrales was doing a lot of work for Lima last weekend.  With Huckerby and Ronnie O'Brien in the line up, the Quakes look a little more dangerous.  At Norwich, Darren was known for running at people and will have to adjust to the weather here.  Ronnie used to run at people but sits a little more now, making both sides of the park a bit stagnant.  Shea Salinas and Alvarez could add some real spark if given thirty minutes or so.  On the flip side, both Ronnie O'Brien and Darren Huckerby provide the much needed possession of the ball of which the youngsters still lack.  I am interested in watching Scott Sealy try to run at Vanney and Dominguez.  Hopefully, Ryan Johnson and Scott are on the same page and working close together.

If LA's weakest area is right up the middle, and if Vagenas and Pires start, then run off them.  Which basically means, to use an old coaching idiom, "engage-disengage."  Ramiro needs to keep working to get on the ball,  which he does well, as does Lima.  Get it and give it quickly.  Ball movement, not only attractive, will be make possession easier as the Gals chase.  When  Vagenas or  Pires have the ball, get on them, pressure right away and force a turnover. A few weeks ago against Chivas, LA did not react to the opposition's obvious strength.  Chivas ran right up the middle of the floor time and time again.

On the defensive side, San Jose must pay attention to the obvious.  While you cannot stop or handle every danger, by doing the right things and playing honest, a clean sheet can be had.  No silly fouls near the box (and we know Ruiz will be looking to make that task difficult).  Stay compact and force the Galaxy to make poor choices with the ball, hopefully giving it away. Challenge everything, jump early on all crosses and set pieces.  Be aware that Greg Vanney can still play a quality ball over the top.  And don't get caught up in the hype, whether that is the drama called Beckhamania or it's the dangerous pest Ruiz.

My keys to the game:

Keep it simple, play smart, don't give the ball away easily.
No silly fouls near the box.
Remember what that guy Buddle did last time, so keep close tabs.
Run right through the middle in transition.
The longer it remains at zero the more the fancy LA guys will get pushed out of shape.
Oh and any team with Landon Donovan can win a match in a heartbreaking moment, so pay attention.

(Tim Hanley is a former assistant coach with the Earthquakes, Dynamo, and Galaxy, and played in net for the NASL Quakes.)