Possession will be the key as Earthquakes, Revolution face off Saturday

Share All sharing options for: Possession will be the key as Earthquakes, Revolution face off Saturday 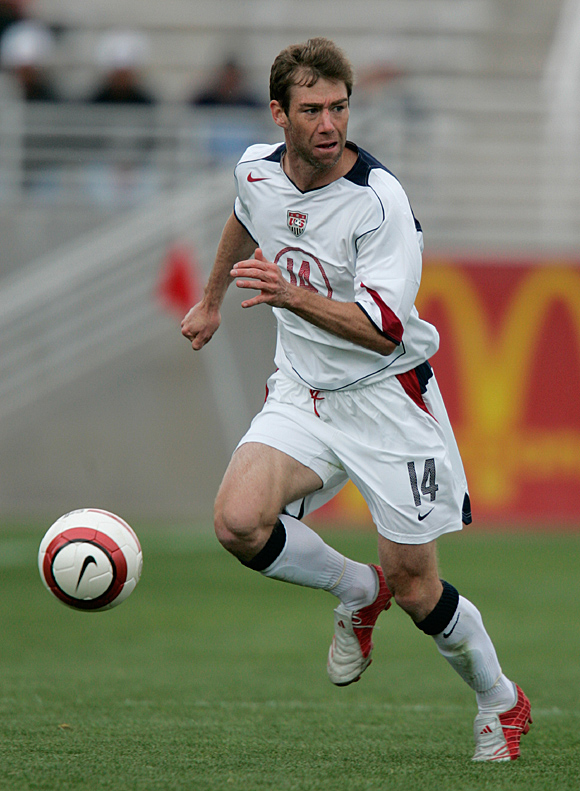 With Shalrie Joseph out due to a red card in his last MLS match, the task of running the Revolution midfield will fall to Steve Ralston, seen here in a 2005 appearance for the U.S. men's national team. Photo: John Todd, centerlinesoccer.com/isiphotos.com.

The bye week is over so we're back at it, and I am thinking Thursday is video day at the San Jose Earthquakes training ground.  Typically in the Yallop - Kinnear sides Thursday and sometimes Friday mornings are film days.  Usual clips include ten minutes of the opponent's style and strengths — what to look for, really.  It is entirely possible that the coaching staff will skip this week's review to allow the Earthquake defenders some sleep tonight.  If Eric Denton watches the New England/Houston Superliga final in whole or just parts, he will wake up this evening in a cold sweat,  visions of 31-31-31-31 flying by. Number 31 is the Revolution's Sainey Nyassi. We'll come back to him in a bit.

New England is having another good year.  The coaching staff of Steve Nicol and Paul Mariner are right there with the Houston bunch as the top staff(s) in MLS.  These guys get it.  Through fixture clogs, injuries, call ups, transfers, Nicol just rolls along year after year seemingly unfazed.  Each season the Revs sort of re-invent themselves.  New players with different styles seem to fit in just fine. Somewhat blue collar, just the formula for success in our league.  The staff has instilled a collective vision, and everyone knows what is required to win. (Think Quakes '05).  New England has always enjoyed flank play and in years past they were at times slower out wide (Steve Ralston is no sprinter) but still extremely effective.   In 2008 they have added speed in the wide positions.

This is what I think we'll see on the pitch from New England this weekend.  Matt Reis in goal; in front of him, Chris Albright on the right, and here it gets tricky.  If Michael Parkhurst tells Nicol he is ready to go, we may see three in the back.  Nicol usually plays a 3-5-2 but the Revs have been using four lately due to Parkhust being away in Beijing.  Nichols could go with Albright/Parkhurst/Heaps.  Or, throw Pat Phelan in at center back with Parkhurst and go with four.  Jeff Larentowicz has spelled in central defense but I think we'll see him in his familiar defensive midfielder spot in that Sharie Joseph is serving a red card suspension. And if Parkhusrt can't go, Chris Tierney could play on the left in a four, and Steve surely won't throw former Santa Clara Bronco Amaechi Igwe out there as he was a bag of skittles against Houston, gifting them one and nearly two goals. Whew.

In the midfield where the Revs historically have been more than good, Larentowicz will do the dirty work in front of the defense, and hopefully Steve Ralston is the attacking mid.  I say hopefully because as a fan of the game I want the best guys out there and Steve is one of them.  In the attacking mid role he is very good.  In addition to his superb and well documented passing ability, when in the middle he gets a chance to shoot and score.  Out wide for New England, look for  Mauricio Castro on the left and the aforementioned Nyassi on the right.

Up top, they'll have Taylor Twellman (if healthy-let's hope so) and either Adam Cristman, Kheli Dube or Kenny Mansally.  Each has seen action in the last few matches but none have impressed enough to ensure a start except Twellman, even after his layoff through injury. I would venture to say Nicol will go with a holding guy and a speed guy.

Let's analyze the Revs. Reis had a stinker in his last match against Chicago.  I would think he will now go for awhile now without making any gaffes as he will have to refocus.  I like Matt but think he loses focus sometimes in games, paying too much attention to both the refereeing and opposing players, engaging them when he should just do his job.  Plus, I think he is out shape.

His back line we know a little about.  Albright loves to get forward and is a pretty good crosser of the ball.  In a three he doesn't get to travel too far forward.  When Nyassi is on the floor he doesn't need to!  Parkhurst is a cerebral player good with the ball, Heaps the athlete and not as clean in his passing.  If we see four, Pat Phelan is a big rookie and if Chris Tierney sees the field he is a converted midfielder.

In the middle of the park and without Sharie Joseph, their engine, the Revs will look a bit different. Nicol could very well go with four in back, which means Larentowicz holds down the middle and Steve Ralston becomes the attacking mid, in a diamond so to speak. Ralston takes on the direct play and is crafty.  Against Houston in the Superliga final he saw an opening and instead of one of his pinpoint crosses, he shot from sort of an angle forcing a diving save from Pat Onstad.  Then late in the match and down 2-1 on the next set piece from a similar angle, Onstad stays a little too close to his line, perhaps expecting another shot from Ralston. Instead, yep, Ralston crosses superbly to Joseph and it's 2-2.  I would be remiss not to mention that earlier in the match, his volley from a Castro cross after a late run into the box tied the game at ones. Castro does a good job on the left and has a good final product.  Nyassi is fun to watch and for the Quakes, Denton will be well served to force him inside — every time!  Nyassi just bombs by defenders and made it a very long night for Wade Barrett in the Superliga final, and Wade is one of MLS's better left backs.   Eric will have to get some help, either from Darren Huckerby or from his center back.  Khano Smith will probably sub on for Castro and the long legged Bermuda native is a handful in his own right. I think he would play more if he wasn't such a whiner, which does not sit well with the Revs coaching staff.  The other possible sub is Wells Thompson, although he has not seen the field as of late.

Taylor Twellman is a goal poacher.  Much like Luciano Emilio at DC and  Carlos Ruiz in LA, Taylor requires service to be effective.  Cut off his service and he cannot do it on his own.  He's only effective from the edge of the eighteen and in — that's it.  But man oh man, is he good in there.  If he is healthy enough to play, San Jose will be well advised to follow him everywhere:  locker room,  snack shop, parking lot, etc.  Adam Cristman is the big foil while Kheli Dube, and Kenny Mansally are the fast guys.

The Earthquakes will have their hands full controlling the Revolution midfield.  Possessing the ball will turn this match.  If San Jose can put pressure on the Revolution backline, win the cleared balls, and then make a few passes, this could be a good day at the park.  Giving up the ball needlessly will allow New England chances, forcing Huckerby and Ronnie O'Brien to defend too much.  If Ramiro can keep the form he has displayed in the last few weeks and if Francisco Lima can become more engaged, San Jose has a good opportunity to get 3 points.  When I say Lima needs to engage, what I mean is he tends to stay too deep, forcing Ramiro to run and cover.  Against LA, Ramiro was too close to Francisco, having to run too far back to pick up the ball. The further Ramiro tracks back, the further he is from helping the attack.  Lima needs to make some more tackles when playing the defensive midfield role.  His best tackle in the LA match was riding Landon Donovan out of touch but he was the third in a string of support—behind even Ryan Cochrane.  He needs to be the first tackle.   Ramiro should take the set pieces,  he is better at it.  The Ralston-Lima match up could be great.  Steve is not fast but he is clever.

With Huckerby, O'Brien and now Scott Sealy and Arturo Alvarez, there is just enough talent to bring a little anxiety to the Revs side.  The Earthquakes midfield will not get the same joy as in the Galaxy match, but the front line could have some fun.  The Quakes attackers are "run at you" kind of guys, which bodes well for points against the Revolution.

My keys for a result:
Take away passing lanes to the Revolution's strikers, especially Twellman!
Push the Revs wide players inside and support each other in defense.
Keep the ball.
Keep team shape, in attack and in defense.  New England can get stretched.
Set pieces-both sides of the ball.

(Tim Hanley is a former assistant coach with the Quakes, Dynamo, and Galaxy, and played for the NASL Earthquakes.)