Cannon hopes team can capitalize on momentum from Galaxy win

Share All sharing options for: Cannon hopes team can capitalize on momentum from Galaxy win 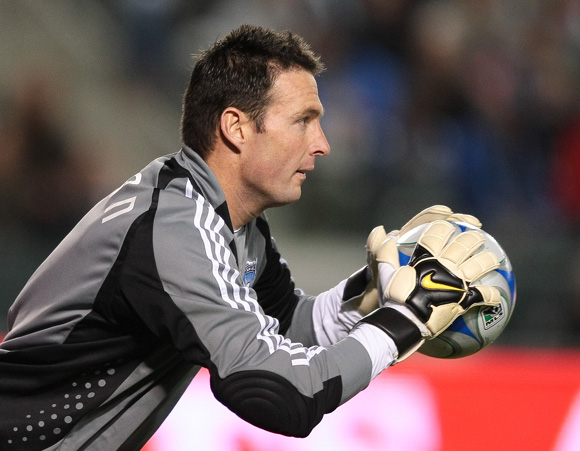 Joe Cannon is one of five players on San Jose's roster who played with the team in its previous incarnation. Photo: John Todd, centerlinesoccer.com, isiphotos.com.

If the San Jose Earthquakes are going to make a serious run at a playoff berth, goalkeeper Joe Cannon thinks the time is now. The team's stirring August 3 victory against the L.A. Galaxy has Cannon and the rest of the Quakes thinking that the struggles that marred the early season are finally behind them. "I remember games at old Spartan, it seemed like it was a special thing. Somehow we'd always pull off the result or the victory, and that was the first time with the new Quakes that I kind of felt like, this is something special."

Center Line Soccer's Jay Hipps spoke with Cannon after the team's practice on Thursday. Here's what he had to say:

How are things shaping up now?
Mentally, we're in a much better spot than we've been in a long time. But in saying that, you know, big game Saturday.

It's funny, just looking at the standings and realizing where things are probably going — I'm not going to say it's a must win, but I think we need about seven wins in our last 11 games to have any chance, and coincidentally we have seven home games, so, saying that, I think it's almost a must win.

You've been here from the start. How has the team come together in the last month, with all the new players? What sort of changes have you seen?
I think offensively we've got a lot more quality. It seems like the confidence of the group has gone up a lot, too, especially knowing that we can score goals. I think the team is at the point where we think we're a competitive team — we can compete with anybody and we can play against anybody, and for us now I think it's a matter of maybe every year, adding one or two people rather than three, four, five come in.

I think we have great depth off the bench, especially once Ned gets healthy and Gavin gets healthy. We have a lot more options going forward. With Ryan Johnson now off the bench, he can come in and play because he's had game experience. It's something that I think we're all excited about, because not only has — you know, the whole group has just improved tremendously, and you can see it everyday in training.

There seemed to be a new level of focus at practice today.
Winning helps the mood a lot. To have a two-week break after our biggest win of the year, you know, it was nice — it was a good reward.

What does that win against the Galaxy do for your confidence?
I just think winning in general — it's a habit, and it has to start somewhere. I think the game itself could have been a microcosm of our season. We started off great and then kind of slowly let them eke back in the game. We could have let three points get away, but you know, I think what happened is we scored that third goal, and hopefully that's the change of things. You hope that you can build off it.

Obviously this game, New England's coming to town and they're a great team, probably the best team in the league through the first half of the season, so I think we're going to have our hands full but at the same time, we've beaten Houston at home and we've beaten L.A., so we've beaten some good teams.

Actually, other than that, we've hardly beaten anyone at home. (laughter) But we beat Columbus on the road, and Colorado. Those are our four wins — not really hard to keep track of those. (more laughter)

But I think that whole game, it's kind of the arrival of Arturo (Alvarez) and Darren (Huckerby) and Scott (Sealy), and those guys were instrumental in the first two goals. That whole first half I think, with the mistake of us letting them back in the game with their goal late in the first half, other than that, we played almost a flawless first half.