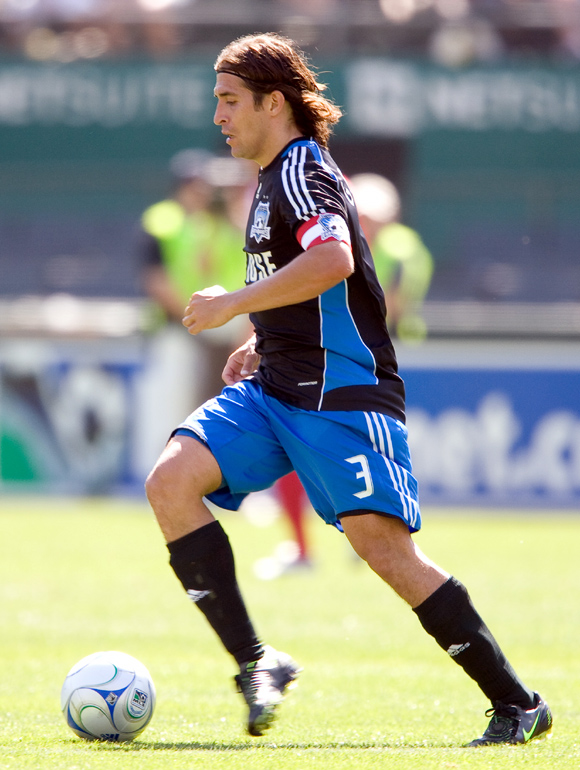 Last month, Center Line Soccer asked Earthquakes captain Nick Garcia if he would be willing to answer questions submitted by our readers. He was, and you did, and now we have the answers.  Thanks again to Nick for playing along!

Other than hanging out at art & wine festivals, what do you like to do during your free time in the Bay Area?
I really enjoy all the Bay Area has to offer… especially if we have a day or two off. I have been to Santa Cruz, Capitola Beach, an A's baseball game,  a Sharks game, Shoreline Amphitheater to see the Police, and up to San Francisco many a time to shop and for dinner. I have also had the opportunity to coach a few youth teams on occasion and really enjoyed that. For the most part, if I'm not busy and on the run, I am hanging out at my apartment, running errands, napping and reading.

Growing up in Texas in the 80's and 90's, who were your soccer heroes or role models?
I grew up following Tatu with the Sidekicks and the Dallas Tornados. Back in my day, the Sidekicks were the team to beat — at least indoors!!!! I also enjoyed following Clarence Seedorf and his great career.

I see you have 6 caps — what has been the highlight of your time with the National Team?
My best memory with the National Team was probably the game I played back in 2004 in Miami against Argentina in the Orange Bowl. I have a lot of respect for the Argentineans, their style of play and way they approach the game of soccer from the youth level.

What's been the most pleasant surprise about coming to San Jose?
The weather and the great support we get from our fans!!!!!!!

How does Coach Yallop's style differ from some of the coaches you've had in the past?
I have had some great coaches over the years: an Englishman, Iranian, German, Hungarian and many American coaches. For me each one has taught me a lot along the way. Each coach obviously has their own style but when comparing all of my past coaches to Frank, very few are able to manage players as well as Frank. Having been a player in the league and a great record of success, many guys respect him for his soccer knowledge, brutal honesty and ability to push guys to their potential. I enjoy playing for Frank and think he has the team headed in the right direction.

I have to ask about two games, one you'll like and one probably not. First the bad one: Kansas City's extra-time loss to San Jose in the 2003 playoffs. Next, the good one: the Wizards Open Cup win in 2004. Any particular memories come to mind?
I have no real bad memories of the 2003 playoff loss, other than losing to a good SJ team. We (the Wizards) had a pretty good push during the playoffs and a few poor decisions cost us, but it wasn't just one or two plays; it was a culmination of many mistakes that derailed our chances of moving on. Quite frankly, we didn't deserve to move on!!!! As we all know, come playoff time, anything is possible!!!!

As for 2004, my best memory was winning the club's and my first Open Cup for Lamar Hunt at home against Chicago. We (the Wizards) had snuck up on teams throughout the tournament and peaked at the right time winning the Cup and making it to MLS Cup 2004, eventually losing to DC. So, all said, 2004 was a pretty good year for the Wizards.