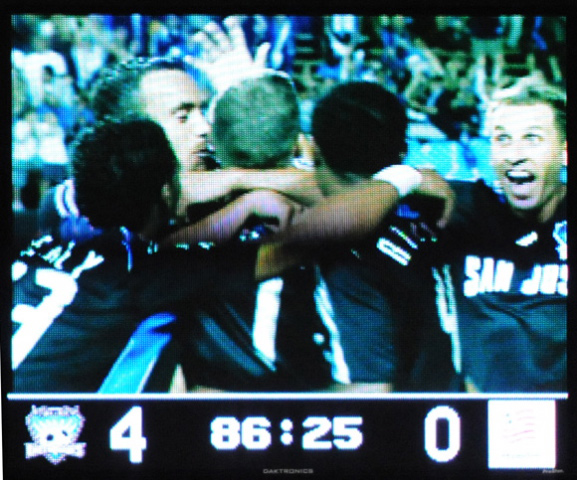 The Buck Shaw Stadium scoreboard said it all as Ronnie O'Brien and company celebrated his second goal of the evening and San Jose's fourth. Photo: Joe Nuxoll, centerlinesoccer.com, isiphotos.com.

On Saturday night in Santa Clara, the San Jose Earthquakes served notice to the rest of the league by closing their three-game homestand with a stunning 4-0 win over Eastern Conference leaders New England in front of 9,859. Ronnie O'Brien had a pair of goals to open and close the scoring, while Ryan Johnson and Scott Sealy each added a goal in the Quakes' biggest offensive output of the season.After the Quakes' tough 1-0 loss at Chivas USA on July 5th, few would have guessed that this was a team that might be heard from come playoff time, but the win was the second straight for San Jose (5-9-6) and increased their unbeaten streak to five games since the Chivas loss. The team now lies just four points adrift of Dallas, current owners of the final Western Conference berth.

"The team has been building to good performances," said a pleased coach Frank Yallop. "It makes a difference when everyone plays well. We have a tough game next weekend but the team now looks like it can win games. I've said all along we're trying to build the team correctly."

O'Brien echoed his coach's sentiments after scoring his second and third goals of the season. "I think when you add quality players it changes the attack," he said. "When you get so many different players, you can do a lot of stuff going forward and it's easier to play.

"When we are all on together, we are pretty confident."

New England, whose long month has included the Open Cup and Super Liga, dropped their second straight league game and are now in second place at 10-6-3, one point behind Columbus.

San Jose got off to a quick start, with Eric Denton and Darren Huckerby taking charge of the left side and repeatedly creating dangerous attacking opportunities in the first 10 minutes. The Revolution managed to squeak through unharmed at first, but after an attempted clearance of a Huckerby cross in the 11th minute, Francisco Lima knocked it back to a streaking O'Brien, who volleyed it from the right over a perplexed Reis for the first goal.

The Revs pressed their attack but could not get on the right foot. In the 21st minute, poor clearing by San Jose gave them a great chance but Steve Ralston couldn't connect on a bouncing cross into the box. In the 29th, forward Khano Smith was all alone in front of the San Jose goal but booted it wide right by a good five yards.

The Revolution kept possession for the next four minutes, but their inability to get shots caused obvious frustration. First, a Ralston pass went past Adam Cristman, who couldn't get a foot on it. A minute later on the left, Smith overshot Mauricio Castro for a San Jose throw-in.

New England finally got good chances from set plays as the half wound down.

In the 35th minute, a yellow card was given to Eric Denton for pulling down Sainey Nyassi streaking from the right flank. Castro put the free kick low past the wall but it was saved alertly by Joe Cannon, one of his six saves he made enroute to his seventh shutout of the year. On the next New England attack, Nick Garcia was booked in the 39th for a rough tackle on Nyassi. Ralston's free kick was good but the ball was headed over by Pat Phelan.

In the 42nd minute after clearing a San Jose corner, Smith had a breakaway run from midfield but was immediately surrounded by three Quakes defenders and lost it temporarily, with New England stealing it back before former Revolution defender James Riley headed away a cross for a corner.

After a throw in, the Revs crossed into the box, but no attackers could capitalize as the ball dangerously bounced twice in the box before Cannon scooped it up.

The Earthquakes went on the offensive one more time in the 44th when a corner curved into the six-yard box, but Sealy's header bounced out near the right post.

New England had the first good chances in the second half when an errant back pass was stolen by Nyassi but the shot was saved near the penalty spot by a charging Cannon. The Revs again stole a pass a few minutes later - this time from Garcia - but Cristman couldn't find Taylor Twellman in time and Riley muscled away the ball.

The match took an unexpected turn when New England's iron man, goalkeeper Matt Reis, was subbed in the 55th minute for backup Doug Warren, thereby ending a streak of 7,795 consecutive minutes, a mark that dates back to September 3, 2005.

Warren was asked to play a part in the match just three minutes later, as both Sealy and Huckerby converged on the new netminder. The collision gave New England possession but Sealy was knocked down hard on the touchline, staying down for almost a minute.

In the 60th after another New England corner, Jay Heaps had a point blank shot that Cannon saved off his chest, with the putback by Nyassi going wide right.

Concerned that New England's physical play was getting the better of his side, Earthquakes coach Frank Yallop opted to take off forward Arturo Alvarez in favor of Ryan Johnson in the 63rd minute, a move that quickly began to pay dividends.

San Jose's first good chance of the half came four minutes later when Corrales sprang Johnson for a one-on-one, but Warren came out and slide tackled it away. O'Brien's pass off the rebound was cleared before it got to Sealy.

San Jose got its insurance goal in the 71st minute. O'Brien passed to Sealy at the edge of the penalty area, where he cleverly backheeled the ball to Johnson. The Jamaican shot the ball first time, pounding it past Warren for San Jose's second goal of the night.

That started the Revolution's downfall as San Jose rode on emotion the rest of the night.

In the 76th on the counter attack, Huckerby found Sealy on a 3 on 2, and the former Wizard calmly slotted in his first goal as an Earthquakes to make it 3-0.

O'Brien was knocked down after being undercut in the 82nd, but he got the last laugh in the 87th , adding the final nail in the coffin with a floating left footer that went over Warren for the final score.

"The second one was my favorite," said O'Brien, comparing his first and second goals of the evening. "My left foot is a secret weapon. Even I don't know about it - it's that secret."

Yallop hopes that the thrill of this win doesn't backfire on his team.

"We're still behind (in the standings), so we've got to make sure we don't get carried away with this one result."

San Jose returns to the scene of their last loss next Saturday to play Chivas USA, who currently sit sixth in the Western Conference two points ahead of San Jose.