Share All sharing options for: Quakes can take advantage of decimated Chivas 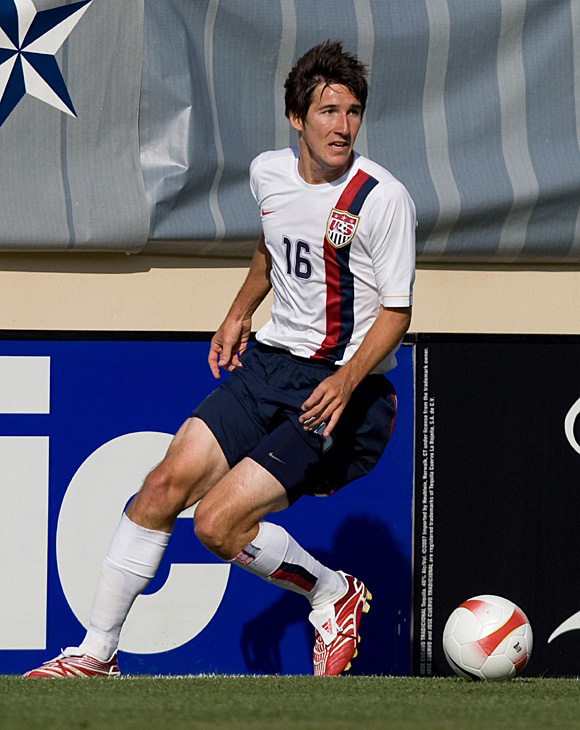 With a number of starters absent due to injury, rising Chivas USA star Sacha Kljestan may find Saturday's match against the Quakes a tough proposition. Photo: John Todd, centerlinesoccer.com, isiphotos.com.

It's a good day to be an Earthquake.  Some of the players used to say that a few years back and I'm wondering if Ramiro Corrales, affectionately called "Pibe" by Arturo Alvarez, is singing the phrase.  San Jose just thumped a good but tired team, and this weekend there is another tired team in sight.  Chivas is a mess right now — they have not won in five games. The Quakes couldn't ask for much more from the proverbial soccer gods.   Remember, it's all timing.

Preki arrives each morning and sits down at his desk in the bowels of Home Depot Center.  His office is small, almost cramped, compared to those of his Galaxy landlords.  He pulls out the daily injury list delivered from the medical staff, takes a look, shakes his head and, like the Winnie the Pooh story I used to read to my kids, he mumbles to himself, "think, think, think." Jesse Marsch, Maykel Galindo, Alecko Eskandarian, Raphael Wicky, Alex Zotinca, Lawson Vaughn, Ante Razov, Justin Braun.  All potential starters, all out.   Razov was on the bench against Houston and didn't play but Preki will be hoping he is ready for Saturday.

Chivas acquired Zach Thorton  when Brad Guzan went overseas, and although he is a good manager in the nets, Zach can no longer save the match for you.  Against Houston, Preki went with four in back using Claudio Suarez and Shavar Thomas in the middle with Bobby Burling on the left and Carey Talley on the right. Chivas gave up four goals in 25 minutes!  Burling cannot play out there, so a decision has to be made centrally.  Talley came off after 13 minutes with rookie midfielder-forward Keith Savage taking his spot.  Suarez came off at half for rookie and Cal grad Eric Ebert.  If I am sitting in that cramped office at HDC, I go with Thomas and Burling central, Savage on the right and Jonathan Bornstein at left back.  I leave Suarez on the bench — as I have previously written, Chivas performs better without him on the field.

In the middle of the park we know Francisco Mendoza is quality and will play.  Hopefully Sacha Kljestan is back from his senior side call up and is raring to go.  Paulo Nagamura usually plays the holding role paired with Jesse Marsch, but Jesse is out and "Naga" came off at half on Wednesday night.  If he wasn't injured, this is a performance change.  I would think we'll see "Naga," Mendoza, Kljestan and rookies Paladini or Chiles.  Up top, Preki used Attiba Harris and Roberto Nurse.  If Razov can go we'll see him paired with Harris or Nurse.   Harris is generally more effective as a wide midfielder, which is where I would slot him in this match.

The danger players are Razov, Mendoza, Klejstan and maybe Harris as he can run past people.  Mendoza likes to run at defenders and usually falls down in or around the eighteen. I don't need to remind anyone that the resulting Razov free kick can be game changing.  Kljestan for my money is growing into one of the best midfielders in the league. Does he do all the work on both sides of the ball?  Maybe not, but very few can.  When Chivas had all their guys last year, Sacha shined, but he's not going to get much help on Saturday.

In the San Jose camp, one doesn't mess with success.  Don't change a thing but build on last week's impressive outing. After a win the coaching staff gets a chance to work on some of the things lacking in the team's game. When matches are lost one has to spend a good deal of training time just patching up holes.  This week after the big win, you'd be likely to see some extra work on set pieces, finishing, team shape, while still doing the same things that got the three points over the weekend.

The coaching staff knows the pitch at HDC is big, so possession again is the word of the day.  I should add shape and patience as well.  With Mendoza and Harris, Chivas still has some breakaway capacity and Razov, if on the pitch, makes clever runs.  Keep Mendoza away from the box, forcing him wide.  Do the same with Harris.  Some coaches might force these players inside to the supporting defenders but I wouldn't.  Keep them wide where they cannot combine with Razov or Kljestan.

For another victory, San Jose would do well to run Chivas around the big pitch through good ball movement.  Take advantage of their current state. Preki will have the team working on possession this week but I don't think they have the quality on the field to pull it off. Even on the big pitch Chivas loves to play through the middle more than most teams,  so the Quakes need to know that. The Earthquakes can pick and choose appropriate times to pressure, win the second or third pass in the sequence and attack.  At HDC, shape is king.  Keep it in defense as well as attack and it can be a fun day at the park.

There is three points here for the taking. A rare statement for an away match but Chivas is hurting so don't let them off the hook.

My keys for a result:
Team shape
Possess the ball, run Chivas ragged.
Run the channels, hold the ball up, and join as a group in the attack.
Set pieces — Pay attention, primarily to theirs as they may represent the opposition's only opportunities.