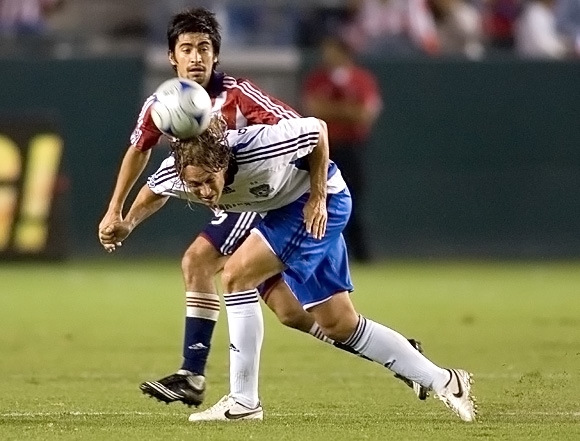 Earthquakes midfielder Kelly Gray, who came on in the 14th minute for an injured Ramiro Corrales, heads a ball past Chivas USA's Paulo Nagamura. Photo by Mike Janosz/isiphotos.com

(Carson, Calif.) In their third and final visit to the Home Depot Center of the regular season, the San Jose Earthquakes were able to pick up a key away point in a goalless draw with Chivas USA. Returning to the scene of their last loss, San Jose survived a cancelled goal and an injury to one of their team leaders to hold onto the tie in front of 12,209.

"On the chances it was pretty even. On the play, Chivas played better than us on the night," said Earthquakes coach Frank Yallop after the game. "For long spells we were not at our best. But what I liked was we didn't crumble and at the end we could have stolen it. So that was encouraging."

Two teams going in opposite directions, Chivas and San Jose both needed a win to get back into the playoff picture.

Chivas fell to 6-9-6, with 24 points to stay two points ahead of the Quakes, but have not won since their 1-0 victory over San Jose July 5th on this same field, a span of six games. Zach Thornton had three saves, including a big one in the final minute to get his first shutout in two years.

The Earthquakes (5-9-7, 22 points) keep their non-losing streak going to six. Although they were unable to move up the table, they stayed within striking distance of the final Western Conference Playoff spot with nine games to go.

"I told the guys you can't play well all the time but what you have to do is grind results out. We know it's tough. Every time we step on the field we have to earn the right to play," Yallop said.

With Chivas having several regulars out with injury, as expected there was tentative play early. The beginning was painful for both teams in the literal sense. In the 3rd minute Ramiro Corrales' shot was blocked by Chivas defender Shavar Thomas and triggered a Chivas fast break, however Thomas remained down and needed a minute to catch his breath.

San Jose then got a major scare when in the 11th minute Ramiro Corrales banged his left knee to breakup a Chivas counter attack and was subbed out for Kelly Gray. It was a sprain to his MCL and broke his streak of 464 consecutive minutes played. The veteran midfielder had played five complete games since coming out the last 3 minutes of the July 5th loss at the HDC.

"He's having a terrific year for us," said Yallop. "He's one of those players that you miss when he's not playing. From day one he's been a leader, not so much vocally but with his play. He's a big loss, we'll see how long he'll be out, but he has been a terrific professional and we missed him tonight."

Without their midfield leader, San Jose struggled to keep shape and Chivas kept possession in San Jose's half for the next four minutes. In the 19th minute, a lazy pass put Joe Cannon on a dangerous 1-on-1 with Atiba Harris in the box that Cannon barely cleared, giving Chivas a corner.

San Jose won a corner kick two minutes later, but despite the Quakes' many touches, Chivas' suffocating defense wouldn't allow a clear shot. Five minutes later, Thornton again didn't have to do anything again as Huckerby's volley was blocked in the chest by Thomas.

"(Huckerby)'s dynamic, but we couldn't get him the ball in the right areas," Yallop noted after the game. "Chivas did a good job of shutting him down and denying him the ball. But when he did get it was exciting for us. It's good to have him on the team because he stretches things. He's very direct, a good reason I like him so much. He's looking to go at people and he wants to make a difference in games."

Chivas missed a golden opportunity in the 29th after Huckerby was called for foul outside the arc. After the misdirection froze Cannon, Razov's left footer went barely left of the goal.

After Huckerby drew a foul five minutes later, Lima's attempted cross went high over the bar. That was San Jose's last good look at scoring until the break as the home team had the bulk of chances the rest of the half.

In the 35th a header from Razov went right to Cannon. In the 37th, a yellow was issued to Riley for aggressively slowing Jorge Flores' turn to goal. Sacha Kljestan's free kick was tapped by Chivas, and Cannon had to dive quickly to his right post to save it.

Soon after, Harris then went down after Nick Garcia stepped on his foot and had to come out for a minute.

Chivas had their best opportunities for goals right before the end of the half. In the 44th minute on a throw-in for Chivas, Razov one-touched the ball near the penalty spot to Kljestan, who quickly shot it but Cannon saved at the goal line.

Finally, in the first minute of extra time, Flores dribbled around Riley on the left side and left it for Harris just inside the box, but his left foot shot went wide of the far post.

The urgency picked up for both teams in the 2nd half.

In the 49th minute, Chivas sent a dangerous cross that rolled 2 yards in front of Harris but he couldn't reach it. San Jose responded in the 51st when a short Huckerby cross was punched out by Thornton, the threat ending when O' Brien put his rebound shot from 25 yards high over the net. On the counter, Kljestan one-touched it a yard past the left post.

The game got physical as Chivas put on the pressure for the next five minutes.

In the 54th minute, a foul was called on Thomas, but the Quakes again put the attempt way too high. One minute later a foul was called on Denton near the corner flag and in the57th a yellow was given to Hernandez for pushing, giving Chivas a dangerous free kick outside the box. After the San Jose wall was moved back, Kljestan sent it too high.

Both teams made substitutions in the 59th minute as San Jose's Ryan Johnson came on for Arturo Alvarez and Alecko Eskandarian subbed for Kraig Chiles of Chivas.

In the 65th, Huckerby gave San Jose a chance but his cross couldn't get to Ronnie O'Brien in time. The scramble ended with Eric Denton crossing it high over post. Chivas countered and in the 66th Jonathan Bornstein got a good give-and-go from Harris but shot it wide left. A minute later Harris' cross smothered by Cannon.

In the 69th on a 35-yard dead center San Jose free kick, Gray's powerful shot was deflected off the wall and over the net, but San Jose couldn't convert on the ensuing corner.

Chivas almost had the game winner after a furious five minutes saw them surrounding the San Jose net. The stands erupted with what would have been the game winning goal in the 73rd when Razov found Eskandarian, but the goal was waved off for offside, a decision that was confirmed by the TV replays.

In the 75th San Jose got two corners in a row but Gray headed his chance wide.

The home fans almost had another winning moment in the 77th minute. After Harris' shot was saved, Mendoza kept it in and passed to Eskandarian but this time he tapped it wide left.

San Jose found life at the end of the game after Ned Grabavoy came on for Johnson in the 84th minute. In fact, the team's best opportunities of the match came in the closing minutes of the game. Off a play that resembled a carbon copy of his 87th minute goal last week against New England, O'Brien cut inside at the top of the penalty area and curled a left-footed shot to the far post in the 85th minute. The ball looked destined for the side netting, but Thornton made a remarkable dive to parry the ball past the goal and out for a corner kick.

“I couldn’t see the keeper very well; there were players in the way," said O'Brien. "So when I bent it, I actually thought it was in the corner. I thought it had gone in, I really did. And then I see this hand come out from around the back of somebody. He made a good save.”

Chivas was threatened again moments later when another Quakes corner found Johnson's head but the ball was cleared off the line by Mendoza.

Chivas nearly stole all three points in the 89th minute as Razov beat a San Jose defender to a bad back pass, but Cannon scooped up the forward's centering pass.

San Jose had the last opportunities in injury time and almost pulled off the last minute win. First a corner kick gave Grabavoy a great chance but his header, like many of San Jose's attempts on the night, went too high. A minute late, Huckerby spied an opening but his shot was smothered by Thornton to give the Chivas supporters a huge sigh of relief.

"We had a couple of chances, but all in all I think for us a draw was a fair result," O'Brien added. "I think the way we played, we got a draw out of fighting. We didn’t get a draw out of playing extremely well. We hung in there, did what we had to do, so we could’ve stolen it, but a point’s decent for us."

Earthquakes defender Jason Hernandez agreed. "Whenever you are on the road it’s important to try to defensively be solid, be tight. We left with a clean sheet, we left with a shutout," he said. "At the end of the day, as a defender, that’s the most important to me. I don't think I had my best game tonight, but it wasn't my worst. We came out with a zero on our end and to me that's all that matters. That was a great result for us on the road in a game that we didn't play our best."

The draw brings the Earthquakes to 5-9-7 on the year, just two points behind Western Conference rivals Colorado, Los Angeles, and Chivas USA. It was goalkeeper Joe Cannon's eighth clean sheet of the season, the second best total in MLS behind Jon Busch of Chicago.

The Quakes next take the field on Saturday, August 30, against the Kansas City Wizards at Buck Shaw Stadium in Santa Clara. The match marks the beginning of a three-game homestand, and six of the team's final nine will be played at home.

"We feel we're equal to any team in this league. There's parity especially in the west," Yallop said. "Our run at the end of the season looks favorable, but we have to make sure we do the right things."