Hanley: Quakes, Wizards will be playing to win

Share All sharing options for: Hanley: Quakes, Wizards will be playing to win 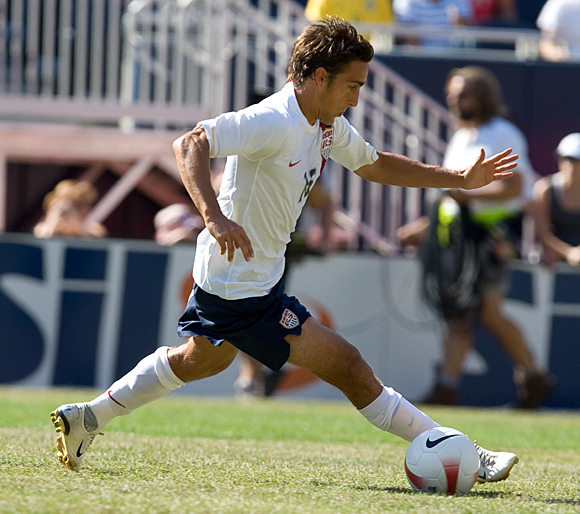 Dog days and crunch time.  Two teams looking for three points, both with playoff visions.  A must win?  Yes.  The season in MLS can be split into two separate categories:  Regular and Playoff. We've seen teams have less than stellar regular seasons and yet travel pretty far in the playoffs, even winning the whole darn thing.  We seen teams play as good a regular season as conceivably possible and yet get knocked out in the first round.  But the thing is, one has to get into the post season to find out!  San Jose and Kansas City each have a chance for post season playoff glory, but the deck is stacked against them.  A team has to be able to win, especially at home.  The stats show an MLS team win on the road is a rare thing.  The Earthquakes can help themselves out a great deal this weekend by proving three points at Buck Shaw is a given.
A sea breeze is forecast to come into San Jose by Friday, cooling things down.  Saturday at Buck Shaw will be a reasonable 82 degrees so we should see some good movement out there.  No excuses.

Kansas City will likely continue with the line up used in the last few matches.  It's something of a 4-5-1/4-4-2 with Kevin Hartman in goal, covered by Jack Jewsbury on the right, rookie Matt Marquess on the left with Jimmy Conrad and Aaron Hohlbein central.  In the midfield we should see Michael Harrington on the right, Davy Arnaud on the left, Kerry Zavagnin and Sasha Victorine as holding mids with Claudio Lopez the attacking midfielder just underneath Josh Wolff.  Lopez is almost a forward, similar to what we've seen from Columbus and how they use Schelotto.

Hartman has one thing going for him at this stage of his career.  He has been in the league a long time.  He won't be surprised by anything that happens on the pitch.  However, this is all I can honestly say positively regarding his play. Kevin is leggy and has not been in good physical condition for a few years now.  A bit of a "liner," San Jose would do well to test him early by driving shots from distance and look to push early balls into the box.

Jimmy Conrad in front of him has athletic cover in second year player Aaron Hohlbein.  Jimmy is smart, but wooden.  Run at him!  Jimmy will resort to arm tackling anyone with speed.  On a side note, at some point in the game he will go down to the floor injured in some way.  Like his fellow one-time San Diego Flash teammate Joe Cannon, both JC and JC  love a little extra attention.  Jack Jewsbury, like Hohlbein, are converted midfielders.  Jewsbury is quick, likes to get forward and has a very powerful shot that he is not afraid to use.  Gunn High School (Palo Alto) graduate Matt Marquess, who also went to Santa Clara and UC Santa Cruz, has started recently at left back.  I would like to take some credit for helping Matt become a decent player but won't, because with most youth products there are a great number of former coaches that have a strong influence on a particular player's development.  Matt learned from local guys like Vava Marques, Smillier, Paul Holocher, Tim Martin, Charlie Hatfield and got to play as a youngster with Andrew Jacobsen (CAL & FC Lorient), Javier Ayala Hill (Chivas USA) Mehdi Ballouchy (Rapids), and the Hatzkes (Houston and San Jose).  Matt is best suited as a wide player with a good left foot and a tireless approach.

In the middle of the park the Wizards keep it crowded.  Zavagnin is effective if he doesn't have to cover a lot of ground. Left alone, he just doesn't possess the legs. (Think Pete Vagenas here.)  So run at and off him.  He'll get help from the gangly but rangy Victorine.  Sasha and Conrad, we should note, are both very effective on attacking set pieces.  Harrington is young and can run up and down the floor.  Arnaud on the opposite side is a similar grafter-worker, if not more refined. Arnaud spent the first few years of his MLS career as one of the most underrated and least paid players.  He has been good since he came up and has been on every MLS coach's wish list as a potential asset. We may see Arnaud on the right as well, but if on the left he will look to cut inside and combine.

We haven't really seen Carlos Marinelli, the Argentine, in quite some time.  He has hardly appeared since the Wizards dropped a decision to Columbus back in June. He hasn't even made the subs bench for some games, but I don't know if injury or ego has been the culprit. Wizards coach Curt Onalfo has some serious, Arena-like attitude so maybe we have a little friction.  In reading Wizard players' quotes, we see comments about "family, accountability, communication, everyone working together for a common cause," and so forth. When I see that I usually surmise that something is not quite right — otherwise, why bring those things up? Were they missing before?  Good teams, together teams, don't say much — they just get on with it.

Up top,  Lopez is the guy that pulls the strings.  He takes most of the set pieces, looks and wants the ball, and is possibly KC's most dangerous player.  He has a good left foot and in years past was a clinical and lethal finisher. Claudio used to bag a goal every three games. His numbers are down now, so the Quakes will work to keep it that way. Force him away from the box, facing his own goal and on his right foot.  He has lost some pace but still can turn and run at defenders.  Josh Wolff, a little more of the "hold up" guy, is still strong on the ball and will look to get in behind the San Jose defense at every opportunity.

Kansas City likes to run and attack with speed. They're sort of a fast break team, so shape will again be very important for the Earthquakes.  In years past, the Wizards would make scoring against them very difficult and then break when you've been pulled out of shape.  This year is not so different but the Wizards cannot afford another draw, even if it is on the road.

In the San Jose camp, the staff is going to have to find a way to compensate for the loss of Ramiro Corrales.  Some would disagree but Ramiro has my vote as team MVP this year.  I would almost prefer a Gray-Lima tandem holding then the other systems we saw earlier in the season.  Most importantly, how does San Jose continue to isolate and get the ball to Huckerby and O'Brien?  Without a threat through the middle, teams can afford to double team a wide attacking player, with the thought that dropping back in and recovering the middle is still possible.  Arturo Alvarez can help here if he is willing to come a little deeper, collect the ball and pose a threat either through running and committing defenders or combining with Scott Sealy near the box.  This will force the Wizards to pay attention to the middle of the park, conversely opening up the flanks.

My keys for a result:
Team shape in attack and defense.
Set pieces. With delivery from Lopez and Conrad and Victorine on the finish, these need to be kept to a minimum.
Possession.  It's been "on" one week, "off" the next.  Has to be "on" this Saturday.
This match will be physical — closest to playoff soccer so far this season.