Hanley: Quakes, Dynamo will be angling for a win

Share All sharing options for: Hanley: Quakes, Dynamo will be angling for a win 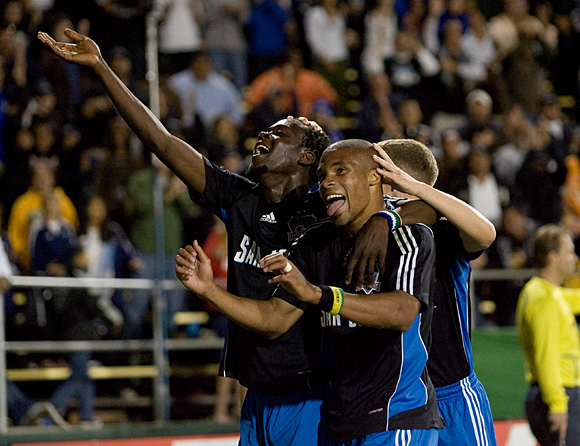 Kei Kamara's goal against Houston may have been the high-water mark of his Earthquakes career, but he'll be wearing orange on Saturday. Photo by John Todd, centerlinesoccer.com, isiphotos.com.

I went fishing with Quakes assistant coach Ian Russell yesterday. Ian is a fly fishing master and I tag along to learn and record his epic catches.  (Epic is his word, not mine.)  Over the years, we've fished together in Colorado, Montana, and Idaho as well as a number of spots in Northern California. For this epic outing we hit the Lower Stanislaus River, which is about two hours away, subject to the driver.  (I drive painfully slowly.) Inevitably, our conversation turned to soccer.  Ian has a keen eye and truly understands the game — he gets it, as I like to say.  When we spoke of the upcoming Houston matches all he could muster was a "man, this is gonna be a tough one."  Ian gets it — this is going to be a tough one.

Houston, as I have alluded to in previous pieces, doesn't always start out well but late in the season they are a thundering train.  This weekend they'll have all their guys back from international duty, so look out.  Funny enough, we'll probably see a line up very close to the one they trotted out at Buck Shaw in May of this year.  The Dynamo are having fun,  starting to get into their post-season form, and have roster depth.

Pat Onstad, back from Canada national team duty, will man the nets. In front of him we should see Eddie Robinson and Bobby Boswell central, with Wade Barrett on the left and Craig Waibel or Richard Mulrooney on the right.  Richard seems to be preferred over Craig excepting a Rico Clark absence.

In the middle of the park, Brian Mullan out on the right, Brad Davis left side, Rico Clark holding and Dwayne Derosario in the middle attacking.  The only exception I can think of here would be the addition of Stuart Holden if Dwayne has taken a knock while away with Canada.  Rico didn't play very many minutes in the World Cup qualifiers so he's ready,  and the Dynamo beat Kansas City with Brad Davis scoring, so it's unlikely we'll see any changes.

Up top, I think we'll see Nate Jaqua and Kei Kamara.  Brian Ching will want to play and Dominic Kinnear might do it but I believe he'll rest Brian.  Ching played a lot of minutes with the U.S. national team and three games in such a short period of time is a lot to ask.  We'll see him at Robertson in another week's time.

Like a good bottle of wine, Onstad keeps getting better or at a minimum,  getting the job done.  The team has no confidence in Tony Caig (one can see it on the pitch), so despite Pat's time away with Canada,  Onstad will play. Robinson and Boswell are as good a pairing as one will see in MLS.  Eddie provides the muscle as well as the speed, Boswell while not the quickest has  decent positional sense at his relatively young age.  Wade we know about, rarely beaten, a professional's professional.  On the right in  Mulrooney, we should get our fireworks.  The match up out there between him and Darren Huckerby should be fun to watch.

The middle of the park is where the Dynamo shine. Clark does the tough work in the middle, slowing down the opposition while giving great support to his teamates.  Rico is always available to collect the ball. In front of him in Dwayne DeRosario, we get to watch one of the most dynamic players in Major League Soccer.  Dwayne has really grasped his role as an attacking mid and is perhaps the most dangerous midfielder in the league. Dwayne is like a sleeping rattler that one hopes not to wake while out fishing in the back country!  He joins late into the space the strikers have pushed open,  collects the ball and runs right at the defense looking to 1) shoot, 2) get into the box one on one with the keeper, or 3) combine with a teammate.  Dwayne still maintains his striker mentality — he's just a little further away from the box so he's always looking to close that space. This will be Francisco Lima's biggest test and an opportunity to show his value.

Brian Mullan on the right may have to work back and help Mulrooney but if Brian plays well enough, he'll force the opposite effect.  Brian loves to take opponents on and has added a new wrinkle to his game.  Brian can cut back on to his left foot and float service into the box.  Earthquakes left back Eric Denton will need help if Mullan is in form.  Mullan playing well sort of creates a push-pull effect on that side of the park.  Brad Davis is a little bit like Ronnie O'Brien as he doesn't get forward quite as often, sometimes doesn't work back, but this kid has an absolutely grand left foot.  He is as gifted with that boot as anyone in MLS. Brad's service on set pieces is as good as any player in MLS — yes, even that guy with the L.A. Galaxy.  Soccer matches are won in the midfield, and this is setting up to be one of the best midfield match ups we'll see all year. (On a personal note, I wish Ramiro was in there).

Up top, Jaqua and Kamara are pretty similar in style and their roles are well defined for them by the Houston coaching staff. (Again, Ching may play, but I doubt it.) Challenge for every header, win every header, hold or flick on, get in the box. The emphasis on "hold the ball." Nothing else is accepted. Perform those tasks and you see the field, otherwise join the subs on the bench. Houston players have defined roles — not to say they lack creativity but there are certain skills and characteristics demanded.  I use the word demand because that's what it is.  The coaching staff and players do not suffer fools.  You are here because they think you are good enough, so do the following or get on the next bus out of town.  Those that handle the pressure can have a career turnaround as well as take home some silverware.  Jaqua will remain a little more central while Kamara will run the channels looking for the ball clipped in behind the Earthquakes midfield.

In San Jose, we now have a group looking to show they belong in the playoffs.  This match will answer a lot of questions. In Houston they have a formidable challenge, a real MLS Cup contender.  Can this team compete?  In order to keep the playoff hopes alive, the Earthquakes will need to get a result at Buck Shaw. One cannot afford to package this match with next week's fixture in Houston.  A win in Santa Clara sends a huge message and the  match next week will actually mean something.

Three points are possible if the Earthquakes can find a way to handle the vaunted Houston attack and possibly exploit when in possession. If Houston has a weakness it might be their willingness to go forward and attack too much.  The Dynamo do not play for draws; it takes three points for them  to go home satisfied.

Think of it this way: When I am out on the water with Ian Russell and I catch the first fish, there is a little more focus in his casting and sometimes I think he'll jump in the water to get the next fish if he has to.  The other day when I heard two "Whoa yessss!" from upstream, I wanted to trudge up to where I could see him and holler, "Show me the fish!"  Where am I going with this? A good day out in nature, on the river wetting you line, is like a tie game if one doesn't catch any fish.  (I think Ian is still mad I pulled the first bass out of a lake in Florida during our 2001 Earthquake pre-season).  My point? Ties don't cut it — Houston is coming here to win.

To handle the Dynamo, San Jose will have to possess the ball and do 90+ minutes of hard work.  Houston will not give up.  The Earthquakes will have to fight for each other, covering a lot of ground.  Scott Sealy has to hold the ball up and Arturo Alvarez will have to work both sides of the ball.  Houston will key on Huckerby, taking away service to him as well as showing him inside.  If Arturo plays well, this tactic could backfire.  If the Quakes are facing their own goal while in possession, Houston is getting it done tactically.  The Dynamo will look to do much of the same things as San Jose.  Kinnear and Yallop  will each ask their team to possess and move the ball sharply, something Houston did not do during their last match at Buck Shaw.

This is an epic match up coming at just the right time of year.  Both coaches are going to be looking at ways to exploit the opposition, so we may see Ryan Johnson  come on early for San Jose, or even in the starting line up.  He played well against Houston last time but the Earthquakes have won with out him now.  Ryan Cochrane lost his spot due to injury — we know he wants in this game bad but what is the precedent?  If you start Cochrane, then are the coaches abandoning the "never change a winning side" philosophy?  The same philosophy says you're not supposed to lose your spot due to injury!  This is going to be fun.

My keys for a result:
Shape.  Don't make that run forward if you can't make the run back!
The midfield is key; defending the opposition inside, attacking their flanks.
Defend like champions.  This one will get physical.
Set pieces.  You practiced them all week, now execute on both sides of the ball.

These games define your team. After all the words and talk, what you do on the field in your actions will say everything about what kind of teammate you are.

(Tim Hanley is a former assistant coach with the Earthquakes, Dynamo, and Galaxy, and played for the NASL Earthquakes.)