Hanley: Unsung heroes could make the difference against RSL

Share All sharing options for: Hanley: Unsung heroes could make the difference against RSL 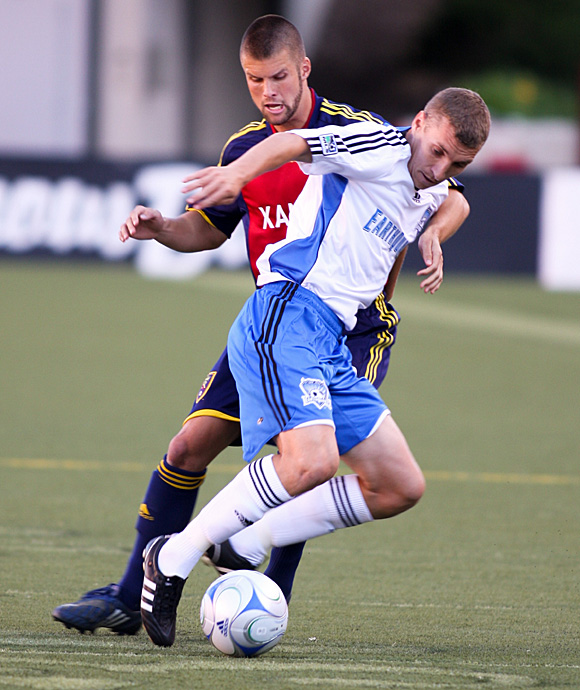 There is really no need to pontificate on the different statistical playoff mathematical equations here, why and what for, and who should make the playoffs.  The Earthquakes take three points from Real Salt Lake Saturday night and they will make the post season tournament.

In the MLS, the playoffs are a tournament.  The big guys get knocked out and the minnows sometimes go an awful long way.   The season is two seasons, regular and post, and one plays the regular to be rolling for the post season.  San Jose is rolling and now can  prove their mettle with a dramatic statement Saturday night.

Real Salt Lake has a little bit of a chip on their shoulders.   Poor for so long, now getting a glimpse of the playoffs, will the team respond or fold under the pressure?  Real dropped points against Chivas and if Jason Kreis panics and changes the line up dramatically, the season could end sooner than expected.  There has got to be additional pressure in that the organization is begging for playoff crowds in the new stadium.

I think Kreis keeps things pretty much as they have been.  We should see the veteran keeper Nick Rimando, fronted by Nat Borchers and Jamison Olave.  Wide in defense, Chris Wingert and most likely Ian Joy.  Real has a solid midfield at the moment despite missing key players due to injury.  Kyle Beckerman will hold down the fort so to speak, with Andy Williams and Will Johnson next to him.  Newly re-signed Javier Morales plays higher in their 4-3-1-2.  (He's the 1!)  Up top Robbie Findley and Yura Movsisyan or Kenny Duechar.

Real's system is very similar to the French side in 1998.  The idea is to allow for a great deal a freedom in the midfield.  Morales is the kingpin and will express himself through finding the ball as often as possible and then springing teamates to goal.  Javier is not a goal scorer by trade — he is the assist man.  Behind him, the three additional mids stay a bit deeper and not as wide as one would see in 4-4-2 with a diamond or a flat midfield  This allows a coach to utilize players that while skillful may not have the wheels.  Andy Williams is not fast nor is his recent sub, Clint Mathis.  But, both are very good on the ball and can shoot from distance.  I know nothing about the Johnson kid except he is young — maybe he can run!  The French used the bulldog Didier Deschamps in the Kyle Beckerman role, with Christophe Dugarry and Christian Karembeu flanking him.  Problem is, Real doesn't have Zinedine Zidane in that 1 role!  It is a good system, however, and Jason Kreis is doing what a good coach has to do.  Try and get your best eleven on the field and create a system that allows the players to thrive based on their individual skill sets.

Up front, in the combination of Robbie Findley, Yura Movsisyan and Kenny Duechar, Duechar is the foil. I like Duechar with Robbie Findley.  I consider Findley  more dangerous than Yura and he should start, but Robbie is also a great late game sub.  His pace is his strength.  Yura Movsisyan, out of Pasadena City College, was the surprise of the MLS combine a few years ago.  He had an Armenian entourage screaming from the stands at the Home Depot Center track field ,  and no one really knew who he was (PCC soccer is not often scouted), but he hit a few bombs in the combine games and all of a sudden Kansas City took him with the fourth pick in the MLS draft.  I think he is a bit of a head case that Curt Onalfo and technical director-GM Peter Vermes got a little tired of.  As a coach if you keep him on the sidelines as a sub, maybe he gets so angry that when he comes on his mindset is one of "I'll show him."

In all likelihood, Salt Lake will look to slow the game down and sit in, looking to break on the Earthquakes.  The points riding on this match are ginormous (spell check doesn't believe me but I looked it up, so there!) and we should see two teams playing somewhat conservatively at the start.  An early goal by either team  and this one will be wild.

The Real coaching staff has watched the entire Dynamo/Quakes match more than once and will attempt to hinder the Earthquakes attack by paying close attention to the San Jose flanks.  As the Real midfield drifts forward, the Earthquakes can take advantage of the space left behind.  Occasionally Kyle Beckerman can get caught pushing too far into the attack (he loves to shoot and can do so from distance), leaving acres of space to work into.

For an Earthquakes result, which means three points and what I consider to be an extension of the season, San Jose must get some heroics from players not in the current spotlight.  The best teams always have these unsung heroes stepping forward at just the right moment, sort of proving their worth.  When the opponents can adjust and thwart your danger guys, who do you have waiting in the wings?  Who is going to make the difference?  Who is the new version of 2001's Manny Lagos, your Jamil Walker and Chris Roner in '03,  Mark Chung in '05? Is Scott Sealy going catch fire? Arturo Alvarez? A Lima free kick, or is it Ryan Johnson?

My keys for a result:
Patience.   Trust your system; the match is 90 minutes long.
Shape in defense and, most importantly, in attack.  Real needs the points as well — they cannot sit in all day.
Pay attention — every moment is important.
Stay with runners, no ball watching.
Deliver the ball early from just inside the opponents' half and crash the box.
Set pieces, both sides of the ball.