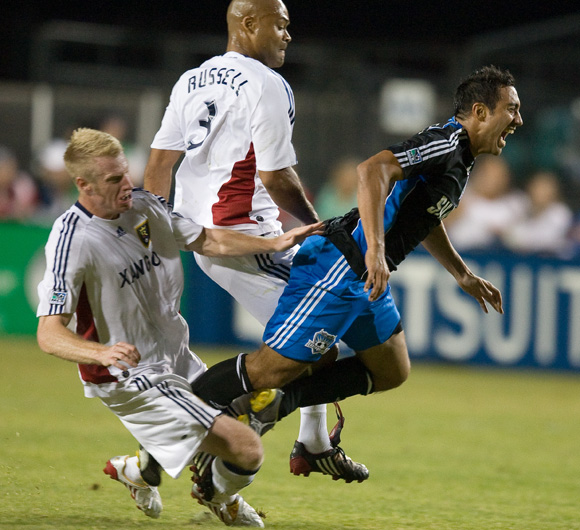 RSL defender Nat Borchers, left, tackles Arturo Alavarez from behind during his side's win over San Jose. Borchers may have been fortunate to receive just a yellow card in the incident. Photo by John Todd, isiphotos.com/centerlinesoccer.com

Santa Clara - Like mountain climbers, the Earthquakes were at the bottom of the table a month ago before inching into playoff contention one point at a time. The thrilling climb ended courtesy of a team not ready to be knocked off the mountain.

Despite a pair of goals from Darren Huckerby, Real Salt Lake outgunned San Jose to win 3-2 in front of 10,059 at Buck Shaw Stadium. Yura Movsisyan scored two goals and Javier Morales added the game winner as Real Salt Lake (9-10-7) pulled into a tie with Colorado in the West's valuable third place slot with 34 points and four games left in the regular season. (The Earthquakes have five games remaining on their schedule.)

RSL entered the game with only one win in their last six, and the one-time Western Conference leaders had fallen to fourth place in the West. With eyes on the first playoff berth in the team's four-year history, Real Salt Lake brought a lot more fighting spirit to the game that reflected in their play.

"It felt like they outplayed us, and it felt like they wanted it more, and it's disappointing," Quakes goalie Joe Cannon said after the game. "They were the hungrier team."

"At 2-1, we should have gone and won the game, but we got sloppy and we can't afford to get sloppy," said Huckerby after his first loss as a Quake. "We weren't good enough today."

The loss snapped San Jose's nine-game unbeaten streak and left them at 7-10-8. The Quakes dropped six points back of the automatic slot and five points of a playoff wild card.

With the high stakes involved, the game was a fight in every sense of the word. The importance of the meeting made the game as intense as a one-game playoff. Tempers flared and the physicality was a manifestation of how hungry both teams were.

The intensity was increased almost immediately, as Movsisyan scored his first goal of the match in just the third minute. Pulling down a long ball from Morales, the Armenian dribbled into the box, faked his way past Nick Garcia, then pushed the ball past a defenseless Cannon for an early, 1-0 lead. It was the fastest goal allowed by San Jose all season and a sign of things to come: Real Salt Lake controlled possession in the first 45 minutes, outshooting the hosts 8-4.

Twenty minutes later, the game's physical intensity growing thanks to a number of mystifying calls from referee Paul Ward, San Jose struck back. Defender Ryan Cochrane, back in the lineup in part due to James Riley's yellow-card suspension, put a long ball past the RSL defense and into the path of the speeding Huckerby, who calmly beat Nick Rimando to level the score at one.

In the 32nd minute, it was San Jose midfielder Ned Grabavoy who had a chance to get behind the defense, but he was cynically brought down by Jamison Olave at the edge of the RSL penalty area, earning Olave a much-deserved yellow card. The Quakes nearly took the lead on the ensuing Ronnie O'Brien free kick, which Rimando parried into the path of Scott Sealy. His apparent goal off the rebound was called back, however, because he was offside on the initial shot.

Five minutes later, a yellow was given to RSL's Nat Borchers for a rough tackle from behind on Arturo Alvarez after he broke away from two defenders (pictured at top). That led to a scuffle between the teams before Alvarez gingerly left the field with the assistance of San Jose trainer Bruce Morgan, with Alvarez finally returning to the match a few minutes later.

Movsisyan pestered the Quakes defense all night. In the 36th minute, Movsisyan got free on a cross but headed it right to Cannon. In the 45th minute, Cannon saved a point blank shot from the third-year pro, and his rebound was cleared off the line by Ryan Cochrane. He managed a shot in injury time as well, but it went wide to the left of Cannon.

The Quakes had a chance at the last second, but Cochrane's header from a Huckerby corner kick caromed off  the crossbar.

A frustrating 45 minutes for the home fans ended as Ward and the rest of the referees got a police escort as players from both teams tried to continue their pleas.

After the break, the intensity didn't slow down as the Quakes were called for a foul 20 seconds into the half. But in the 47th on the counterattack, Huckerby was played into space on a backheel feed from Alvarez and put it past Rimando for the lead.

But the celebration was short lived as the visitors answered right back two minutes later as a San Jose set piece went awry, allowing RSL to counter. Movsisyan followed the bouncing ball and tapped it past Cannon. unlike the end of the first half, Cochrane was unable to keep it out.

"We're disappointed. We tried to be a bit too gung-ho. We have to have a bit more of the English mentality," said Huckerby. "Up 2-1 you don't have 8, 9 players push up to score another goal. You have 6, 7 men stay back to defend it. Maybe we have to start doing that more.

"We took the lead and then we threw it away. That's not acceptable."

The momentum swung back to the visitors after that. In the 57th minute, Garcia picked up a yellow card for a reckless challenge, and a minute later referee Ward whistled him for a foul that put the ball five yards from the box. On the free kick, Javier Morales blasted it in the top corner for Real Salt Lake's third goal.

The rest of the scoring opportunities for both sides were left wanting. In the 66th minute, a San Jose fast break ended for naught as Huckerby took a pass from O'Brien but sent it high. A free kick in the 69th met the same fate.

The best of Cannon's seven saves came in the 72nd minute when he stopped a point-blank header from Robbie Findlay, who had entered the game moments before for Clint Mathis. Two minutes later, Movsisyan shook off coverage from Garcia and blasted it wide left of the post.

Finally, the Quakes had two great chances for an equalizer. In the 79th minute, Davide Somma, a 23-year-old developmental player from South Africa, nearly scored in his first game as a Quake but his diving header forced Rimando into a great save at the post.
In the 80th minute, a handball was called on Olave a yard outside the penalty arc, but Francisco Lima's chip shot was just a foot high of the crossbar.

The five total goals tied the Columbus on May 10 as the highest scoring game at Buck Shaw this year.

The Quakes can jump back into the playoff race with a must-win Thursday night ESPN game at FC Dallas, as they will try to regain the play that made them the hottest team in MLS since mid-July.

"Judging how we played, we need ‘Queer Eye for the Straight Guy' because we need a makeover," said Cannon.

In contrast, the RSL locker room was jubilant. "We've played good soccer for a lot of games in a row and we haven't gotten good results," said coach Jason Kreis. "But tonight, I would say it wasn't the best soccer game, but it was always going to be a battle and I'm glad to see our guys know how to battle."