Hanley: DC United is a team that can be beaten

Share All sharing options for: Hanley: DC United is a team that can be beaten 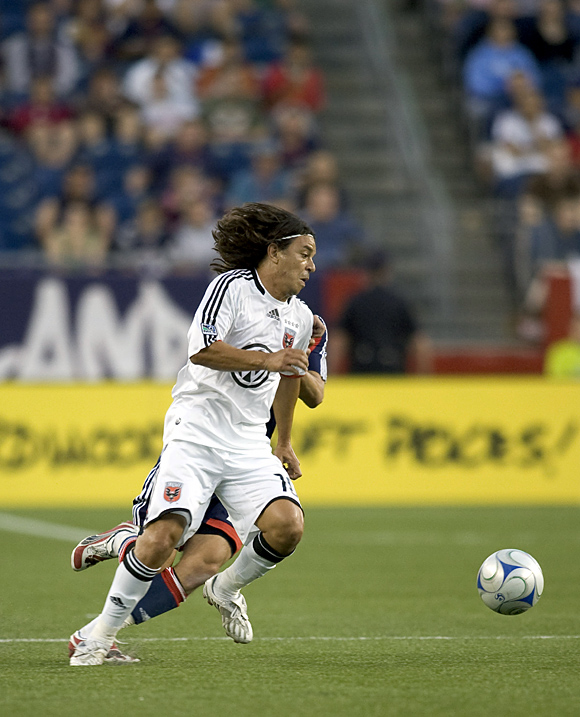 In evaluating MLS sides just prior to the playoffs, I tend to look at the loss column.  In other words, while wins are vital and draws can be frustrating, how many times have you lost? This allows us to get an idea of who we might see down the line deep in the post season. DC United has lost more games this year than the San Jose Earthquakes.  What does this mean?

Every MLS side, with their impossibly small and restrictive senior rosters, loses players due to injuries, national team call ups, even senior proms, but can one earn a draw or three points during these times?  DC has lost ten times!  Houston, the best team in the league, has only lost five times despite an impossible schedule that has them at the 40+ match mark so far in 2008, almost ten more matches then everyone but the Revs. (after watching the NE /Joe Public match one can see how devastating the extra matches can become).  Houston is difficult to beat — which is exactly why they are MLS champions.

DC United is a team that can be beaten.  However — and it is a big however — this is a franchise that hates losing.  DC United has a sense of tradition unlike any other MLS side. The Galaxy like to pretend they have tradition. but their past is as dysfunctional as their present.  The Quakes would have a great unbroken story if not for the move to Houston as, and I have no reservation in saying this, there would be four MLS Cups in the case.  At United, it is as if all the DC alumni and former coaches are watching every move, and the team responds to that pressure.  Results and post-season glory are expected.  I love this attitude.  Don't let losing creep into the side.  Every match, every friendly and exhibition, a win is the goal.  From the front office onto the pitch and in the stands at RFK, losing is not an option — which makes these next few matches pressure cookers for the DC coaching staff and players.  DC United players always have a bit of grit about them.  It didn't start with Ben Olsen but he's a good example.

Here's what I think we'll see from DC: Louis Crayton in nets with Gonzalo Martinez at right back, Bryan Namoff and Devon McTavish central, and Marc Burch on the left.  In the middle of the park, Clyde Simms  will hold with Marcelo Gallardo in front of him.  On the flanks, Santino Quaranta and Ivan Guerrero or Fred. (I love writing that — "Fred.")  Up top, Jaime Moreno and Rod Dyachenko.  Tom Soehn has  used a 4-4-2 as well as a 3-5-2 this season but I would think four in the back is a wise move, which means that if he really wants five in the middle he'll leave Moreno alone in a 4-5-1.

The only possible changes I see are these: Guerrero could play left back and Quaranta could play in the middle as an attacking mid if Gallardo is sore from Wednesday night's Open Cup match.  Joe Vide is out and their top striker Luciano Emilio came off early on Wednesday, re-injuring his groin, and is not expected to be available.

On to the analysis. In Crayton, DC seems to have solved their keeper issues.  Zach Wells was the starter and seemed to be blamed for the early season woes, but I think it had more to do with the back line. Crayton hails from Liberia and was a perennial back up in the Swiss league.  I know little else about him but in the last four matches he's only been beaten twice.  Martinez was moved out to the right to allow him the freedom to get forward, which could also mean he wouldn't stay put!  (I'm having visions of Clash center back/sweeper/forward Mauricio Wright here.)  Namoff has the experience and McTavish provides the young legs.  Burch, at left back, is a converted wide midfielder, big and somewhat athletic but no match for Ronnie O'Brien.

The middle of the park is where DC can shine. In his holding role,  Simms knows the job requirements and does sufficient work in slowing down an opponent's attack.  Importantly, he knows who to give the ball to when possession is gained.  The enigma named Santino Quaranta plays wide, in the middle, and sometimes up top.  He can be so dangerous because he has great touch coupled with an unpredictable approach.  Quaranta has superb vision and is able to not only pick out players but also deliver the ball, smashing a drive or using a subtle touch in tight spaces. He is a treat to watch and although he came up too early and has had his share of troubles, like Edson Buddle, Santino has a big heart, is a good kid, and I would like nothing more than to see him play at his highest level.  Fred we know a little about.  He seems to run around a lot and I am not convinced he is that effective, and the same goes for Ivan Guerrero.  (Seems a lot of salary cap space for these guys, too.)

Marcelo Gallardo is worth the admission price.  I have followed his career from his River days to Monaco and have always thought highly of him.  He has been out injured but played 20 minutes on Wednesday night so we should get him for nearly the entire match.  Gallardo loves the ball and is effective with it.  Unlike most of today's attacking mids, he plays old school, preferring to run with the ball to commit defenses prior to dishing off. He gets the freedom to roam the field without restrictions.  Watching him one gets the feeling he really enjoys his football, which makes him all the more dangerous.

Up top DC United has Moreno and Dyachenko.  Dyachenko is  big and athletic but doesn't seem to find the net very often.  He gets a few shots off but not on frame, so his threat will be in dead ball situations.   Moreno used to run by people — he can't now but it doesn't seem to matter.  Superb at holding the ball up and drawing attention from opposing players, he remains a constant threat.  Like Ante Razov, Jaime makes crafty runs into the channels opening up space for Emilio and Gallardo to operate.  Once joined after holding the ball up, Jaime gets into the box looking for service.  If I was to define or pick a DC playing style, it might be up-back-and-through.  In other words, balls played forward are dropped back or laid off and then a track meet starts as Moreno, Quaranta, Fred, Gallardo, and Dyachenko will storm the box.

I watched the Earthquakes - Seattle match the other night and have to admit I was very disappointed.  Losing is not a good thing, ever.  Each one of the Earthquake players on the pitch is supposed to be better than their USL counter parts.  Unlike a few other scribes, I did not see the Earthquakes dominate at all.  Seattle created the best chances in the run of play and did a good job possessing the ball.  Leighton O'Brien, in his first match in a month, was the best midfielder on the park. His combination with Gardner and West on the sideline in front of me was sublime. Jovan Kirvoski, who looked very unfit, was the most effective Quake and delivered two or three superb balls to spring Adam Smarte.  So yes, DC played on Wednesday night, but they won. Any lingering soreness will be gone as they are the 2008 Open Cup Champions.  On the other hand, the Quakes dropped a game to a USL side.  As stated earlier, I don't think the team should let losing creep in.

For the Earthquakes to be effective this weekend against DC United, they'll need to work at holding onto the ball and eliminate the predictable long balls to Arturo and Scott Sealy.  Namoff and McTavish will win every header and DC's midfield will pounce on the seconds.  If San Jose cannot possess in the middle of the park, even if it is just a two pass sequence, DC will sit on O'Brien and Darren Huckerby. Darren is not going to surprise any teams now and Tom Soehn will undoubtedly work at taking away San Jose's new attacking threat.  Fortunately Darren gets to run at Martinez and Quaranta won't work back very often.  This is good and bad in that if San Jose fails to hold the ball and their shape, Quaranta and company will be cheating up high and then  its "Katie, bar the door," so to speak.

As soon as the ball turns over and possession is won, the Earthquakes should look to play to feet, move the ball quickly to the wide players and let 'em do their thing.  If DC has a weakness in defense it is on the flanks.  Goals against DC come from wide play.  Scott Sealy needs to prove his worth in this match or it may be time to go back to Ryan Johnson to get on the end of some crosses, or even if it is just for dead ball situations.

Defensively, shape is crucial for the Quakes. San Jose cannot afford to get pulled forward only to race back, numbers down, when the ball is turned over. Francisco Lima will have to work very hard and will need help because he cannot cover enough ground on his own. I am not sure where he is going to get the help but lately I have been more and more impressed with Ronnie O'Brien and his willingness to work back and help on the defensive side of the ball.  Gallardo is the guy to watch out for and taking away service to him is critical.  The same should be said for Moreno, with the inclusion that silly fouls around the box will prove ruinous.  If Jaime is facing his own goal everything is OK for the moment, but it is the next sequence that can be harmful.  If Jaime lays the ball off follow him as he will try and slip away as soon as you take a peak at the ball.

All the pre match quotes from the Earthquakes opponents seem to say the same thing: "We know Frank will have them organized," and "San Jose is difficult to beat."  That's the formula for success in this league and maybe the route to the playoffs as well.

My keys for a result:
- Possess the ball — keep it simple.
- Shape in attack — be patient
- Get the ball wide early and run the flanks
- Attitude can win this match

(Tim Hanley is a former assistant coach with the Earthquakes, Dynamo, and Galaxy, and played for the NASL Earthquakes.)