Share All sharing options for: Quakes vault upward in Western Conference with 2-1 win over DC 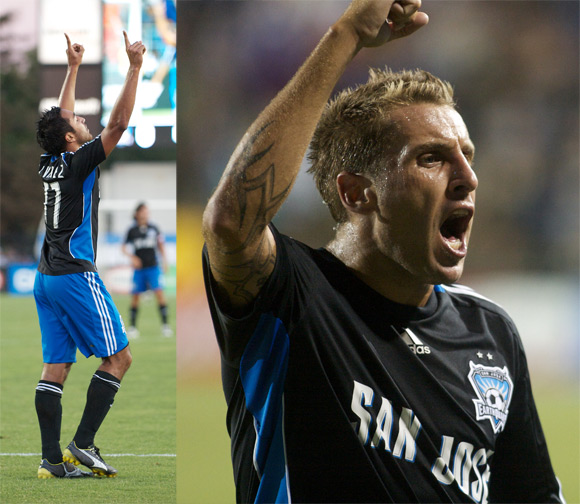 The San Jose Earthquakes ran their unbeaten streak to eight games,  and more importantly jumped past three teams in the ever-evolving Western Conference playoff race, by holding off DC United 2-1 in front of 10,121 at Buck Shaw Stadium.

Darren Huckerby scored a goal and contributed an assist to remain undefeated as a Quake and help the team jump from seventh to fourth in the conference, still 2 points out behind Real Salt Lake and Chivas USA, who are tied for second. DC United fell to 10-11-2 (32 points) but held on their wild card slot.

Both teams were different than the last time they met on June 22. In that 3-1 United victory, Marcelo Gallardo had a pair of assists, and his presence Saturday was only his second game back after missing six games with a sports hernia. That helped offset the DC United regulars missing from suspension, injury or national team duty. On the Earthquakes side, there were six different starters than that night in June. Aside from the new additions added to the squad, the one major injury absence was to Ramiro Corrales, injured two games ago.

The Quakes first good chance was in the 11th minute when Ronnie O'Brien split two defenders on the right side and shot at the near post. Crayton's kick save went high, and Alvarez's rebound blast went wide left.

DC countered with Ivan Guererro, facing his old San Jose teammates for the first time since he was traded to United on July 31, but his 13th  minute cross from the left found nobody in the box. The Quakes pushed forward and a Huckerby run led to a corner, but it went right to the arms of goalkeeper Louis Crayton.

The Quakes, however, broke through in the 18th minute. Huckerby, who was a headache for DC's defenders all night, dribbled his way into the DC penalty area and dished off a ball to Arturo Alvarez, who easily slotted the ball past Crayton for the first Earthquake goal.

After the goal, United pressured San Jose for three minutes straight but couldn't get a clear foot on it for an equalizer. In the 23rd, Guerrero's pass was broken up by Jason Hernandez before DC forward Rod Dyachenko could get to it. A minute later, with Francis Doe circling like a shark, a dangerous back header by Denton was caught by Cannon. Finally, a spectacular United give and go to the left was broken up on the ground and cleared by a breakdancing O'Brien. Then, after a short San Jose counter was broken up by a charging Crayton, Dyachenko tripped over himself and couldn't get a clear shot on a 1 on 1 in the 26th

In the 29th San Jose provided some more passing excitement on the left side of the box. Alvarez centered it, Scott Sealy let it go and that put the ball right at Huckerby's feet but he slipped on the shot and the kick sailed over everything.

In the 32nd minute a stolen ball from midfield fed to Huckerby, who won the one-on-one with goalie but slid the ball too far left to control it, leading to a DC goal kick.
"We should have scored more in the middle of the game," said Earthquakes coach Frank Yallop after the match. "Darren could have scored five. He's a little upset but he said ‘at least we won.'

"I thought Scott and Arturo were sharp," said Yallop about the passing in the offensive third. "I thought we created good chances to score and we didn't and that's a shame."

DC had two good chances in the last ten minutes of the half. In the 36th, Doe took it to near post but his shot went low and off Cannon for a corner kick. In the 39th, Hernandez quickly slid to prevent Dyachenko getting a shot in the six yard box.

After a back and forth start to the second half, Huckerby scored in the 62nd with a right footer that froze Crayton in his tracks.

After the goal, DC‘s frustration started to show as Craig Thompson got carded for a bringing down Huckerby from behind, but the ensuing free kick floated over Ryan Johnson's head. In the 69th, good passing by DC on the left flank led to a header from Ryan Cordeiro but it went wide.

DC finally got on the board in the 76th when Dyachencho jumped on a poor clearance attempt and passed it to Santino Quaranta, who blasted it past Cannon to make it 2-1.

The Quakes countered two minutes later with some more brilliant passing between subs Johnson and Jovan Kirovski, but the last touch to Sealy was called for offside, negating Sealy's goal.

Meanwhile, Huckerby continued to harass the DC defense. He caught Crayton out of position in the 83rd but knocked it wide of the goal. Then in the 89th, he took on three defenders with  on a criss-crossing run from the right flank to the center but shot it wide left of the goal.

Injury time excitement came as Huckerby got the ball off a bad pass and dribbled into the box, but his shot was deflected and O'Brien couldn't get to it before it was cleared out.
DC countered and thought they had a corner in the dying minutes but the scramble in front of Cannon's left post was ruled to have gone off United for a San Jose goal kick, DC's last gasp for an equalizer.

Afterwards, coach Yallop thought his team's resolve was good but noted they weren't as sharp as he hoped.

"We had two days off. Sometimes you are trying to rest bodies rather than train and sometimes that backfires a little bit," Yallop said.

"I didn't think we were as sharp to start the game. I thought -to be fair to them- they could have got a draw out of the game. They were a little unlucky at the end not to squeak something in."

The win moves San Jose (7-9-7, 28 points) to fourth place in the Western Conference.