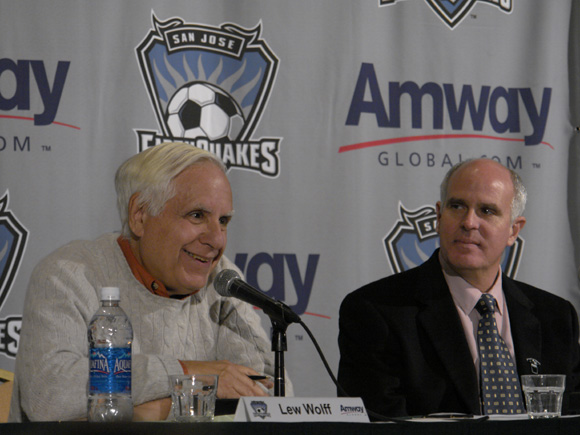 SAN JOSE, Calif. – Today, San Jose Earthquakes owner Lew Wolff  provided an update on the team’s plans for a new stadium, telling Center Line Soccer that their conceptual guidelines called for an intimate, 15,000-seat facility with a berm at one end for lawn seating.

It’s a slightly lower number than the 18,000 capacity that had been proposed in the past, although the berm seating would narrow that gap somewhat. Wolff reiterated statements first made to CLS last fall that he preferred an intimate stadium and today added a few details that should please fans who are hoping for a European-style stadium with little space between the first row of seating and the playing field.

CLS: When we last spoke, at the press conference announcing the partnership with Tottenham, you said that you were about a month away from picking your architect for the stadium. Has that happened yet?

LW: We are considering two firms but both of them are at work. One may be doing a little more than another. And we’ve got a local firm, Devcon, pricing out the thing in huge detail. This is as serious as we can make it right now.

CLS: You may not have blueprints yet, but are you settling on some conceptual ideas for the facility?

LW: It’ll be 15,000 seats with a berm. It will be family-friendly – we’re really not going to have a heavy amount of luxury boxes and things of that nature. We’re going to strip those out of there, both for cost and because I think people really want to watch soccer, not talk (or) walk around boxes. At least that’s my market survey.

CLS: Boxes tend to take people out of the environment that they are there to experience.

LW: I honestly dislike it. Every time I’m in a box, whether it’s indoor at an arena like Staples Center or something, I end up talking to people and not watching the game, which is my purpose for being there. And soccer and hockey are two things you have to watch to enjoy them. Baseball, you might be able to read a newspaper once in a while (laughs).

CLS: You guys are close to averaging 15,000 right now, although that number is skewed by the games at the Coliseum. Does building a stadium that size allow for growth of the market?

LW: It does. We have another section we could add more seats to, but we want to be a little cautious – not just because of the economy. We felt this way from the beginning. Our ballpark (for the A’s) will only be 32,000 seats.

LW: That’s true. We’ll have a berm where people can sit, but I don’t see us doubling the size of the thing, pressing a button and all of a sudden it grows like another tulip. That’s not going to happen.

CLS: I see. You could add a little bit, but you have no plans for magically doubling the capacity or something along those lines. What else has been decided?

LW: We want the fans as close to the field, both in terms of being physically close, a couple of feet, and not being way high either. We’re not going to have the (numbers) of rows that others might have, in terms of the rise. We’re looking for intimacy.

CLS: Is that taking cues from some of the European stadiums?

CLS: You did say expansion would be possible, though. I don’t want to keep harping on it, but what sort of scenario would be required for that to happen?

LW: I’ll have to tell you if we fill it up with happy people, and we should have had 3,000 more, 10,000 more seats, we’d rather err on the side of conservatism than err on that side. It’s just that simple. If we’ve done something that we can’t correct, it will only be a little bit less successful, maybe, but I doubt it.

CLS: The other thing that comes to mind is if the next incarnation of David Beckham comes along and says, ‘Gee, I really like the San Francisco Bay Area and I’d love to come play here.’ If you have 15,000 seats when some of your competitors have much bigger capacities, does it hamper your ability to sign somebody like that?

LW: I don’t think so. In soccer, I don’t think that’s gonna happen. We’re hampered with David Beckham whether we’re here or in Rome. (laughs) (Meaning no stadium is big enough to hold all of Beckham’s fans – editor.) But the answer is no, and if it is, we’ll figure it out. I don’t want to solve that in a physical sense, I want to solve it in a mental sense.

CLS: Do you have any sort of a timeframe for things at this point?

LW: As soon as I can put it together. The answer is ‘I don’t know.’ But we want to get to the edge of the diving board whether there’s water in the pool or not.

CLS: Is the funding mechanism decided?

LW: No. We’re looking at our own equity, we’re looking at getting some debt, and we haven’t talked to anybody yet but maybe the unions will help us out with financing to create jobs. We’re not asking the city for anything, except to help us through the process.

CLS: So iStar is on the back burner at this point.

LW: That’s on the back burner.