No team is a sure thing in MLS playoffs

Share All sharing options for: No team is a sure thing in MLS playoffs 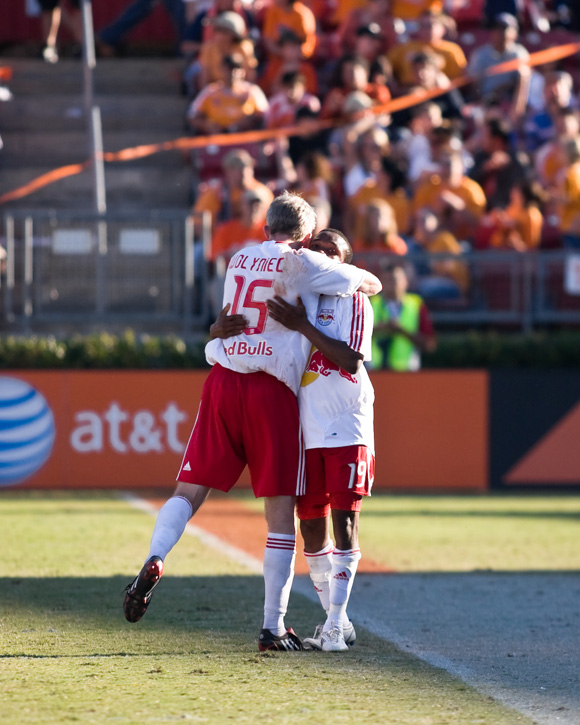 The second round of the MLS Cup Playoffs has the two higher seeds in each conference hosting their opponents from last week's match-ups. In the four matches from last week, the home teams either tied or won, leaving the seeded favorites with work to do if they hope to advance to the conference finals. The paths seem more difficult in the Eastern Conference, where the Columbus Crew and the Chicago Fire each trail in their aggregate-goal series by a one-goal deficit. In the Western Conference, the higher seeds fared much better in their first matches. Both the Houston Dynamo and the Los Angeles Galaxy earned hard-fought draws against their respective opponents Seattle Sounders FC and Chivas USA, setting up winner-take-all match-ups in their home stadiums.

On the surface, it is fair to say that the playoff results have been as anticipated. The four higher seeded teams look primed to return home and earn the victories necessary to advance to the semifinals. However, this outcome would seem very much in doubt when analyzed through the lens of history. In the years since MLS moved to an aggregate-goal home-and-home series to determine the teams that advance from the first round of the playoffs, a significant number of higher seeded teams have lost to their lower ranked opponents. Out of the 24 series in the past six years, the higher seed has advanced in just 15, only 63 percent of the time. The prospects for the higher seeds get even worse when looking at the specific circumstances of the four teams this year. Since 2003, 7 out of 12 times (58%) the higher seeded team survived after losing the first leg of the series, and 4 out of 7 times (57%) the higher team advanced after a first match draw.

In the parity-as-a-rule MLS structure, there are very few teams that can be expected to dominate their opponents on a regular basis. In the postseason, that team disparity virtually disappears. So, there has to be an upset this year, right? As we've discussed, history tells us this is most likely. The playoff adage that "anything can happen" should be better phrased for MLS as "something will happen." In fact, because team parity is the rule in MLS, it should come as no surprise that the higher seed has failed to advance nearly 40 percent of the time since 2003.

It can be argued that the playoff seedings are essentially meaningless given that the higher seed does not really gain an advantage in the current playoff structure. Sure, they get to host the second game of the series in front of their home fans, which could include any necessary extra-time and penalty kick shootouts to determine the series winner, but that doesn't significantly outweigh the fact that they still play at the lower seed in game one. For the 8 playoff teams during the 2009 regular season, their composite home record was 61-21-38 and their composite away record was 35-47-38. Playing at home is clearly an advantage, but the higher playoff seed does not get to play more home matches than the lower seed in the current MLS system.

What is predictable for this week's MLS Playoff action? The four home teams — the four highest playoff seeds — have the advantage of playing in front of their home crowds. In the West, that bodes well for Houston and Los Angeles. However, in the East, Columbus and Chicago have their work cut out for them. The Fire seem to be in the worst position, as they bucked the trend of good home form during the regular season in winning only 5 of 15 contests at Toyota Park. Consider also that they conceded more goals at home than they scored (17 versus 16), and the prospects for the Fire look suspect at best. Columbus may fare better given their impressive home record (which included a 22-game unbeaten streak at Crew Stadium dating back to the 2008 season) and the return to the starting line-up of reigning league MVP Guillermo Barros Schelotto and playmaking forward Alejandro Moreno. The defending MLS Cup champions host the worst 2009 road team left in the playoffs in Real Salt Lake, making their advancement look that much more likely.

So far, the 2009 MLS Cup playoffs have been very entertaining, with four first round match-ups that have yet to disappoint fans of the beautiful game. With berths in the conference finals in the offing, expect nothing less this weekend.