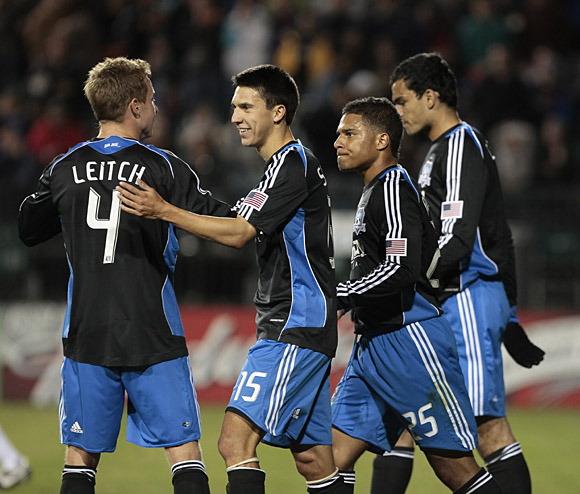 That’s Quincy Amarikwa, the rookie forward drafted out of UC Davis, who scored in the 78th minute to lift the San Jose Earthquakes to a 1-0 victory over the Portland Timbers (USL1) Saturday night at Buck Shaw Stadium.

In their last pre-season exhibition of the year, the Earthquakes enjoyed most of the possession and almost all the scoring chances, but struggled to find the target until Amarikwa’s goal.

Portland goalkeeper Steve Cronin tried to punch away a 25 yard blast from Shea Salinas, but ended up knocking it high in the air. Amarikwa, near the left post, was able to head the ball down, just beating the Portland defenders hustling to clear it off the line.

“I saw the ball building up down the right side,” Amarikwa said. “Shea (Salinas) had a nice shot at goal, and the way the ‘keeper was positioned I figured the best he could do was to push it to the side. I figured if I could get lucky, if the ball fell to the right place I could get to it. It happened to fall in the right spot, and I just got on the end of it.

“It always feels to good to get a goal,” Amarikwa said. “That’s your job as a forward, no matter if it’s pre-season, practice, a playoff game, or whatever. I’m really happy to help my team out and establish that I can be an asset to the team.”

“He’s a joy to watch at times,” coach Frank Yallop said of Amarikwa afterwards, “then he does some stuff that’s so unorthodox it’s kind of funny. But what he does is gives us energy. He tries hard and he’s got some stuff that other players don’t have. I think he’s going to be a good one to be honest. He scored the winning goal, which is great. I liked him.

“I thought Shea (Salinas) was great too, off the bench,” Yallop said. “He has a chance to start next week because I think he’s done well.”

Yallop didn’t have such kind words for his team in general, however.

“It was a little bit disappointing,” Yallop said of the Earthquakes effort. “Maybe it was just the opponent making things difficult for us, and maybe the guys just had an eye on next Saturday (when the Earthquakes begin the regular season). The attitude going into the game was to play well and have a good performance, we didn’t do that. We didn’t move the ball quickly, we didn’t look that dangerous.”

“The ball didn’t seem to be falling for us,” Yallop continued. “It was kind of a bit painful to watch at times from where I was sitting. Having said that, we had a clean sheet, we won the game, and that’s always a positive. It was good to get 90 minutes out of a lot of the guys.”

Throughout the night, though they looked to be playing at exhibition-game speed, the Earthquakes dominated play, but couldn’t seem to put a shot on net. Midway through the first half, San Jose had a five minute span that saw Ryan Johnson’s looping header off an Arturo Alvarez cross miss wide left, a Darren Huckerby blast from 25 yards also miss left, then Alvarez miss high from 15 yards out.

Still in the first half, Huckerby set up Ramiro Corrales at the top of the arc, but Corrales’ shot flew high. Minutes later, it was Simon Elliot letting fly from the same spot, also missing high. Just before the half-time whistle, Amarikwa beat his defender on the end line and found Can Weaver 10 yards in front of goal, but Weaver’s header went over the cross bar.

“First half, we had some good chances to score goals, and we didn’t,” Yallop said. “I think if we would have scored the first one early, that would have changed the game, and forced (Portland) to come out a bit.”

“There was a little spell in the second half where we started to get our game together a bit, and look like we’re stretching them a bit,” Yallop said. “But all in all, you can’t take too much out of these games. We’ll take a look at the tape and try to build on what we did well.”

Several key players either sat out the game with injures, or were working themselves back to fitness after getting banged up in the pre-season. Bobby Convey did not see any playing time Saturday night, and Jason Hernandez did not suit up for the game. After sustaining minor knocks in games last week, Ryan Johnson was pulled after 25 minutes (in favor of Amarikwa), Arturo Alvarez got in 65 minutes (before giving way to Salinas), while Ramiro Corrales played the full 90.

“Convey has a little bit of a thigh (injury), so we didn’t want to risk him,” Yallop said. “It would have been nice to have him out there, but having said that, so you don’t him to pull his thigh and be out three weeks.”

“I think I’ve seen enough of Bobby to know that, football-wise, there’s no problem,” Yallop said. “He knows how to play the game, whatever position he’s in. He’ll probably play central for us. We’ll see what happens but he’s looked good in training and looked good in the Cal-Berkeley game where he did play (central midfield) and I thought he looked comfortable, so I think there will be no problem.”

“Jason Hernandez is still a bit tender,” Yallop said. “We didn’t want to risk him at all. (He injured) a different spot on the same calf he injured with the national team, so he’s a bit hindered with that, so we’ll see.”

“And Ryan Cochrane’s just back in training,” Yallop said. “He’s had 2 days of practice, and played 45 minutes at Cal, but he’s another one on his way back to full fitness.”

With all the injuries, coach Yallop is happy to have New Zealand International Simon Elliot in camp. “He shows experience and calmness a little bit,” Yallop said. “After losing (Francisco) Lima, we didn’t have a ton of money because of getting Bobby (Convey), so we’re just trying to make the squad strong, and I think that Simon adds that experience and know how. I don’t think he or Ramiro were particularly great tonight, but I thought he played the position (central midfield) pretty well. We didn’t get the ball quick enough to them and they didn’t get it out of their feet quickly enough tonight, but it was just one of those games.”

The club hopes to officially announce the signing of Elliot in the upcoming week.

Looking ahead to the MLS season, Yallop was a bit more upbeat. “Any number of 14, 15 guys can play,” he said. “That’s what I like about the squad. I think it’s got some depth to it. No one’s got a guaranteed spot, so that’s always good. That’s healthy on any team.”

The Earthquakes open their 2009 regular season by hosting the New England Revolution next Saturday night at Buck Shaw Stadium.