MLS opener should be a fun game to watch

Share All sharing options for: MLS opener should be a fun game to watch 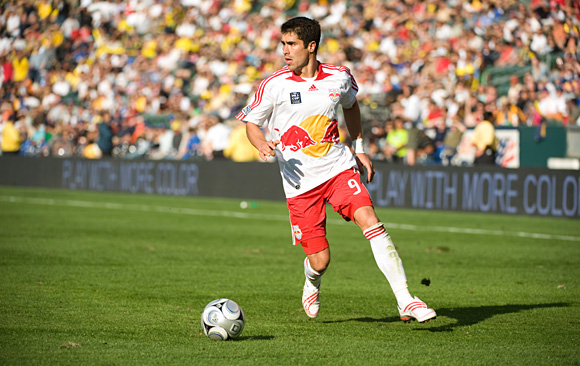 I promised the editor at Centerlinesoccer.com that given an opportunity to do a few or more pre-match write ups,  I would limit my references to fishing, kids' books, and put an end to my trying to be funny. So, with my new found dignified approach, like a solemn procession I march forth with my analysis of this season's Major League Soccer matches on ESPN. First up: Seattle plays host to the New York Red Bulls (Thursday, 6:00 p.m. Pacific, ESPN2 and ESPN Deportes).  Safe to say there is some guesswork here as the pre-season gives us a glimpse but rarely the true story.

Seattle we know a little about, perhaps more than New York, which is kinda strange.  The Sounders, new kids on the block, are the media darlings. Thanks to a fancy, somewhat famous ownership group that knows how to garner media attention, we have a lot of information about these guys. Sounders manager Sigi Schmid is old school and predictable. New York? Ask any of the Red  Bulls players and you'll get a different eleven for Thursday night. Juan Carlos Osorio is like the mad scientist concocting secret potions. (Potion, by the way, can mean poisonous as well as magical.)

In Seattle's 4-4-2, we have Kasey Keller in goal fronted by James Riley on the right and young Colombian Jhon Kennedy Hurtado on the left. (You have to think that dad and mom had a thing for John Kennedy, like Cristiano Ronaldo's folks admired Ronald Reagan).  At center back, I think we'll see Tyrone Marshall and Nathan Sturgis.  In midfield Sebastien Le Toux on the left, Sanna Nyassi on the right, and in the middle Brad Evans, Stephen King, or Osvaldo Alonso.  Up top, Nate Jaqua with the young Colombian Fredy Montero just underneath.

On paper this is a good side with plenty of professional match minutes logged by the rostered players.  However, and this is a big however, there are some holes.  Keller remains a quality keeper but cannot be expected to save the day week in and week out. The Sounders' defense is the Achilles' heel.  Collectively the back line has only had a few games together and will be exposed this year.  Kasey's kicking game has never been his strong suit so relieving pressure and getting the back four a breather will not be easy.  Nathan Sturgis has been in the league a few years, is very talented, but cannot seem to stay healthy for three weeks running.   His MLS career is dotted with two weeks in, three weeks out, two weeks in, three weeks out.  Tyrone Marshall I like.  I know he may have lost a step, and plays an old school game which means he is going to sit out matches due to yellow & red card suspensions, but nevertheless he is better than the central defenders on most MLS sides.

I know little about either the Cuban, Alonso, or the former Charleston Battery player Jhon Kennedy Hurtado.  James Riley is card prone and passes the ball to the wrong team most of the time which will not endear him to his keeper or the fans.  I would think Taylor Graham slides back into a central role once he heals from his foot injury but this will not change the quality enough.  If Jeff Parke returns to MLS from trials overseas, Seattle could have a decent four in back.

In the midfield and until Freddie Ljungberg is ready to go, we'll see a mixed bag. On the left, converted striker Sebastien Le Toux is really skinny.  I know that doesn't matter but he is.  He is also right footed so look for him to push the ball inside.  He has combined well with Jaqua so far in the pre-season matches I've seen.   Sanna Nyassi, like his brother in New England, is fast and lacks polish.  He will run right at defenders and occasionally put himself in good positions but his final product is poor.  Brad Evans in the middle will hold if he is on the pitch and I think he has the quality to get a lot of minutes this year.  Brad has the size and just enough bite to play the holding role.  After that, there is a little guesswork.  I think Sigi plays Stephen King next to Evans but we may see Osvaldo Alonso.  King started 20 games last year for a Chicago team that had plenty of midfield options.

Up top in Nate Jaqua and Fredy Montero the Sounders become dangerous.  Nate is a little like Peter Crouch in that when holding the ball up, laying off and getting in the box for the return service he is good, very good.  When he, like Crouch, turns, tries to dribble, and takes defenders on, he is not as effective.  Sigi loves to win through set pieces and with Nate and Tyrone Marshall he has two guys that can get him goals through direct play. Fredy Montero, the young Colombian, is good, maybe very good.  I say maybe because we have yet to see him in a real MLS match.  Sitting underneath, he likes the ball, will take players on and look to combine at the top of the box.  He falls down just enough to frustrate defenders and opposing coaches! Like Real Salt Lake's Javier Morales, Fredy is able to get a lot of attention inside, giving the Seattle flank players a bit more room to operate.  He could have a very big year, or become frustrated and mail some performances in. If Nate or Fredy get banged up, Sigi has few options.  Former Earthquake Roger Levesque or New Zealand international Jarrod Smith will dress out, but I think Le Toux would step into his usual striker role if either of the strike force takes a knock.

The Sounders will get goals and give 'em, which should make for some very entertaining matches this season.

On to the mad scientist Juan Carlos Osorio and his penchant for all things changing. It's sort of like the person whose obsession is adopting stray dogs — seems a good idea at the time, but usually isn't. Here's what I know, which is probably as much as any Red Bull player, including their coaching staff.  Juan Pablo Angel will start up top.  Danny Cepero will start in goal. There you go, enjoy the match.

What? You want more?  Ever seen Oliver Twist?  Right, sorry, forgot, I am not funny. It is very possible that in front of Danny Cepero we see Carlos Mendes and Mike Petke at the center back positions but Jack Traynor and Carlos Johnson have seen plenty of pre-season time in there. Kevin Goldthwaite will start on the left and Jeremy Hall, Luke Sassano, or Alfredo Pacheco could be out on the right.

In the middle of the park, it gets tricky.  We know Dane Richards has to be out there on the right, the newly signed Alberto Celades will be in the middle, and Seth Stammler should hold, but Juan Carlos has money tied up in a few other players so who knows?  Jorge Rojas needs to see the field and Sinisa Ubiparapovic had a good run at the end of last season, so is he on?

Up top, Juan Pablo Angel is the best striker in the league. Danny Cepero is starting because Jon Conway is suspended, and Cepero is not good enough. Jon will start soon and it is unfortunate the the big wigs at MLS are trying to send a message to the players prior to the negotiations for the new Collective Bargaining Agreement with the players' union, which is how I see it.

New York will try and play something like a 4-3-3 in order to get guys on the field.  Remember, the Red Bulls still have Matthew Mbuta, Macoumba Kandji and Dominic Oduro, in addition to the suspended Khano Smith. Here is where all the tinkering can cause problems: most of the New York players have not played more that a half during the pre-season.   At about 60 minutes on Thursday night, everything could go pear shaped.

I think this game will be so much fun to watch.  Big crowd, plenty of nerves — some on the pitch, but mostly on the sidelines.

(Bay Area native Tim Hanley is an assistant coach for the Houston Dynamo and has held the same position with the Earthquakes and Galaxy. Tim also played in goal for the NASL Earthquakes.)