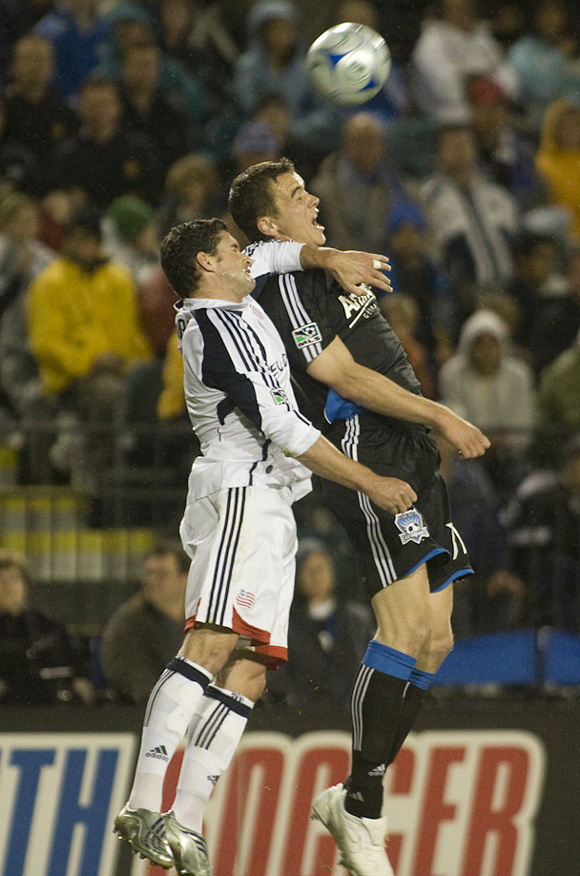 It was exactly the season opener the Earthquakes didn’t want. Despite controlling the run of play, San Jose dropped a 1-0 decision to the New England Revolution in front of a sold out Buck Shaw Stadium Saturday night.

“It was a tough night for us,” coach Frank Yallop said. “What we didn’t want, really was coming out and not winning our first game at home. It’s very disappointing.”

The Earthquakes out shot the Revolution 16-7, but a 55th minute goal by Kheli Dube gave New England the win. Darren Huckerby said, “I thought we were the only team really attacking. You can’t say we were unlucky because we had our chances; it just wasn’t our day today. To create five, six, seven good chances, that’s what you’re aiming to do in a game. It’s up to us to finish our chances when we get them. If we took our chances, we would’ve won comfortably today.”

New England was missing some of their stars, as forward Taylor Twellman and midfielder Steve Ralston were out due to injury, and defender Chris Albright was serving a one game red card suspension. The Revolution also were missing center back Michael Parkhurst, now playing in Denmark, and started a backline that included two 2009 draft choices making their MLS debuts, Darrius Barnes and Kevin Alston, along with untested second-year pro Chris Tierney (6 appearances as a rookie in ‘08).

Still, despite facing such an inexperienced defense, the Quakes did little to trouble New England goalkeeper Matt Reis. A light rain made for slick pitch, but it wasn’t the elements that hurt San Jose. “The effort was there,” Yallop said, “but the quality around goal was what was lacking. We were a little bit hurried when we should be a bit calmer.”

“It’s really frustrating, very disappointing on so many levels,” goalkeeper Joe Cannon said. “Great crowd with the weather, and they deserve better. And I thought we deserved better. It was not a case of (the Revolution) saving balls off the line, or their keeper having a great game, it was us missing the goal. We’ve got to do better on that end.”

After a quiet opening, the Earthquakes started taking over the game midway through the first half. Arturo Alvarez provided some spark in the 25th minute His run down right side split 2 defenders before he got around a third and cut the ball back for Ryan Johnson inside the penalty area. But Johnson miss-hit his shot, and when the ball deflected to Darren Huckerby, his blast from 12 yards missed wide right.

A few minutes later a Huckerby corner kick was headed wide left by leaping Johnson, and when a Huckerby cross found Alvarez in a tight angle near the right post, Alvarez nodded down a shot directly at goalkeeper Matt Reis.

In the 31st minute, San Jose had their best chance of the game. Alvarez fired a left footed blast from the top of the arc, and when Reis coughed up a rebound, Cam Weaver slammed a shot off the crossbar from close range.

“Cam’s chance in the first half, he should have scored, really,” Yallop said. “He was seven yards out when he hit the bar. Not often you get that (chance) in a game, and you’ve got to hit the target.”

New England scored the game’s lone goal in the 55th minute. Jeff Larentowicz chipped a long ball into the box that Kelly Gray tried to flick away, but it fell to Kheli Dhube racing in from the left wing. Dhube slotted a low, hard shot past goalkeeper Joe Cannon and inside the left post.

“It was a little unfortunate,” Yallop said of the goal. “Kelly’s just trying to get a head on it and hit it out, and it goes over (to Dube) and he finishes it well.”

San Jose had plenty of chances for an equalizer, but couldn’t find the back of the net. In the 63rd minute, Kelly Gray’s long ball to Quincy Amarikwa was knocked down to Huckerby inside the box, but Huckerby’s shot from the left side was stopped by Matt Reis well out of goal. Amarikwa then led another rush up field, but fired wide left from 25 yards.

San Jose’s frustration started to show when Amarikwa picked up a yellow card in the 75th minute, and Eric Denton earned one of his own in the 79th.

Coach Frank Yallop, searching for a goal scorer, brought on David Campos for Weaver in the 83rd minute. A minute later Huckerby found Campos open at the six yard box, but Campos’ header missed badly left. “Pablo’s chance at the end, he’s got to do better,” Yallop later said.

Yallop did find some positives on the night, saying Bobby Convey was “not bad” in his debut, that Arturo Alvarez  “did well tonight.” “I think we moved the  ball quite well at times on a difficult surface,” Yallop said. “We did everything we needed to do to give our strikers a chance to score goals, and (a shutout loss) is tough to take.”

Yallop also liked how his team had the ball for most of the night. "I know (New England) had a few guys missing from their team, but still, they’re a quality team and for us to not give any chances to the opposition other than the goal, really, was good,” he said. “But this game is about scoring goals, right, and we didn’t score any tonight, which is disappointing, especially at home.”

“As long as we get a few results in the next few games, we can forget about this one,” Yallop said. “But we wanted to start with a win, and it’s just disappointing not to get that.”

The Earthquakes now prepare to host the Houston Dynamo next Saturday.