RSL has a great opportunity against Crew

Share All sharing options for: RSL has a great opportunity against Crew 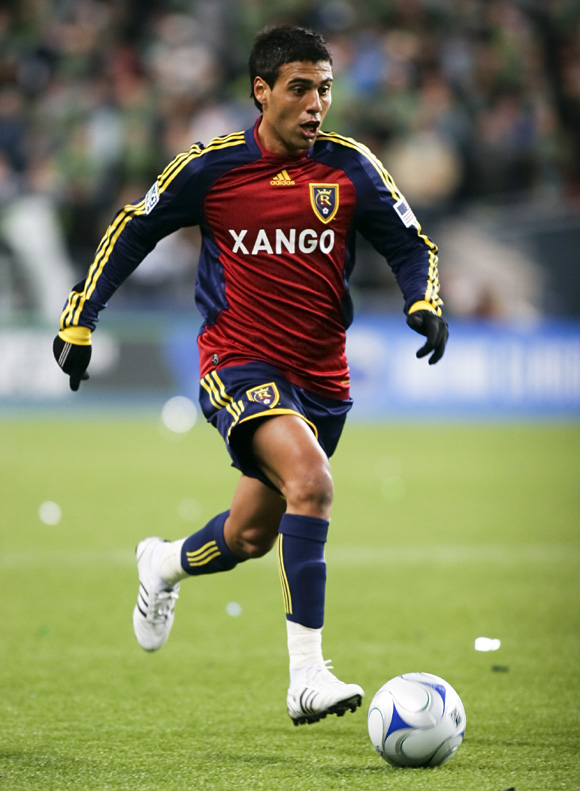 RSL's Javi Morales will  be marked by the Crew's Brian Carroll, in one of the matchups that is likely to be crucial in Thursday night's ESPN2 match. Photo: Eric Salsbery, isiphotos.com.

Let's get right to it.  Columbus Crew and Real Salt Lake.  This one will be a battle.  Salt Lake will be flying for their home opener and Columbus will be looking to hang on.

Columbus should trot out pretty much the same line up we've seen in the last two matches:  Hesmer in goal with Danny O'Rourke and Chad Marshall central, Padula on the left and hopefully Frankie Hejduk on the right.  Hopefully because he  played for the US against Trinidad and Tobago Wednesday night and will probably join the Crew in Salt Lake.

In the middle of the park, Columbus has Brian Carroll sit with Emmanuel Ekpo higher, Eddie Gaven wide right and Robbie Rogers on the left.  Rogers seems to be struggling with a hamstring injury so we may see Alex Grendi in his spot.  Rogers is the runner and dangerous, Grendi sits.

Up top, Alejandro Moreno and Guillermo Barros Schelotto.  Moreno is with Venezuela but should return in time to play, but if not we see Jason Garey.

In Salt Lake, Real should look like this:  Nick Rimando in nets,  in defense Nat Borchers and Jamison Olave central, Chris Wingert on the left, Tony Beltran on the right. Beltran really struggled against Seattle but Salt Lake head coach Jason Kreis has few options if Ian Joy is still injured. In the middle of the park, we should see Kyle Beckerman in the holding role, Will Johnson on one side and possibly Clint Mathis on the other.  In the play maker role, Javier Morales. Up top, Robbie Findley and Yura Movsisyan.

I look at this match as a great opportunity for Salt Lake.  It's their home opener in a great stadium, against a team that I think is playing sub par.  Columbus is not playing the same football as last year.  The Crew were superb in 2008 at pushing the ball forward, holding it up, laying off and then springing the wide players.  That is a style that is very difficult to defend against.

This year, the idea seems to be "get it forward and fall down."  I am serious.  Just take a look at how many times Moreno, Schelotto and Gaven hit the floor.  I heard someone joke recently, "I shook Eddie Gaven's hand at the end of the match and he fell down holding his ankle." I realize Chad Marshall is a great weapon and can score a lot of goals from a Schelotto free kick but this team is capable of better.  An old Galaxy team used to do this, with Carlos Ruiz getting the yardage, and then the big guns arriving in the likes of Alexi Lalas and Tyrone Marshall.  In addition, I think the Crew miss Brad Evans more than some would think.  Ekpo doesn't pick the right times to get into the attack and is not as good a passer.

I look at some of the match ups in this one and can't help but think we will see some good stuff.  Kyle Beckerman will have to pay close attention to Ekpo and possibly Schelotto as the latter tends to play very deep at times.  Brian Carroll will be tested by Javier Morales in what should be a great battle.  How about Marshall and O'Rourke against Findley and Movsisyan?  Rogers running at Beltran or Gaven at Wingert?

To get a result, Jason Kreis may have to rethink his line up. Salt Lake is strong in the middle and up top but not so great in defense.  The back four struggle and can be exposed.  If Clint Mathis is on the right and paired up against Robbie Rogers, Tony Beltran could be in for a long night.  Will Johnson can run with Eddie Gaven, so there's less danger there until Chris Wingert gets close, as he does not mind getting a kick in.  Eddie will fall and the big guns will arrive for Schelotto's well placed ball.

If Salt Lake can keep the ball and find Movsisyan or Findley in the channels, we could see some goals.  Frankie Hejduk loves to get forward, leaving plenty of space behind, and the left back, Padula, is a weak link. Unfortunately, RSL does not have the speed wide right to expose Padula.  Kreis could move Johnson out right and Mathis or Andy Williams on the left.

If Salt Lake can keep the ball and run the channels it could be a good night.  If they make sloppy passes in dangerous areas, watch Columbus quickly attack.

With a little angst and plenty of personalities in Mathis, Hejduk, Schelotto, Morales, Beckerman, and Movsisyan, this one is going to be fun to watch!