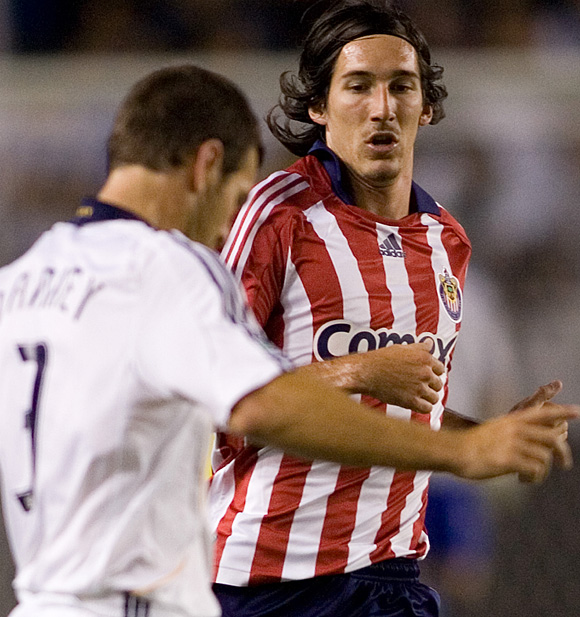 Chivas USA's Sacha Kljestan is likely to play a key role if his side is to get a result against the L.A. Galaxy on Saturday night (10:30 Pacific, ESPN2/ESPN Deportes). Photo: Michael Janosz, isiphotos.com.

Super Classic.  That's what they still call it.  Not so super and not much of a classic, I am thinking.  Chivas the tenant fighting against their Goliath landlord.  Used to be something, lots off angst, fans showed up, someone cared.  I kinda liked it when the Galaxy were better.  As much as everyone loves to kick LA, loves it when the team does poorly, I would rather the Galaxy could play and challenge teams.  Having said all that, I think this match will be very entertaining.

Preki has Chivas doing pretty much what they have done in the last few years. Everyone is injured and yet the group seems to rally around the each other and continue to do well.  We should see the following from Preki:

Thornton in goal, with Carey Talley on the right, Jonathan Bornstein on the left, Jim Curtin and Shavar Thomas central.  In the middle of the park, Jesse Marsch and Sacha Kljestan, Atiba Harris and Gerson Mayen in the wide roles. We could see Paulo Nagamura in the middle and Preki going with one striker.  Up top, Eduardo Lillingston and possibly Alecko Eskandarian.  These guys just fight.

Bruce Arena has a project on his hands.  Pull Landon Donovan from the side and the Galaxy have little chance at winning a match.  We should see the following: Josh Saunders in goal, and here it gets confusing.  Does Omar Gonzalez stay in the side with Gregg Berhalter joining him central?  Tony Sanneh sits?  Sean Franklin is not good enough but who can play in defense on the right?  Chris Klein?  Eddie Lewis was in defense on the left in the last match.  Midfield—Klein, Josh Tudela, Kyle Patterson, and Stefani Migliorianzi.  Alan Gordon and Landon Donovan up top.

Chivas is the better side but can be exploited.  Bruce Arena will have his team fighting for their collective lives.  The Galaxy locker room cannot be a happy one at the moment and the team's play has been poor. In my opinion, the whole 'loaned' player deals have affected the team. Eddie Lewis can still deliver and  LD works his tail off. While most of the U.S. Nats who played last week either took the night off or were subbed out of their respective matches, Landon played the entire 90 plus minutes for his club team. If the Galaxy can sort out the defense, there is a chance for three points.

Preki's boys are confident and will try to physically dominate the match.  Carey Talley and  Jesse Marsch, along with Atiba Harris, love to stick a boot in.  I think Lillingston has been fortunate this season and is not as good a scorer as his stats might suggest.  I still like Sacha Kljestan despite a slight loss of form recently and his tendency to foul recklessly.  The Galaxy midfield cannot handle their counterparts and Chivas can pull LA apart by keeping the ball.

All in all, because of the specific strengths and weaknesses in each team, I am looking forward to an entertaining match.  Jesse Marsch will kick someone, Atiba Harris will kick someone, Jonathan Bornstein will run a lot and sometimes pass the ball to the wrong team, Carey Talley will be on the floor for a bit, Landon will probably score and this one will be a Super Classico!