Game of the Week preview: DC vs. New England

Share All sharing options for: Game of the Week preview: DC vs. New England 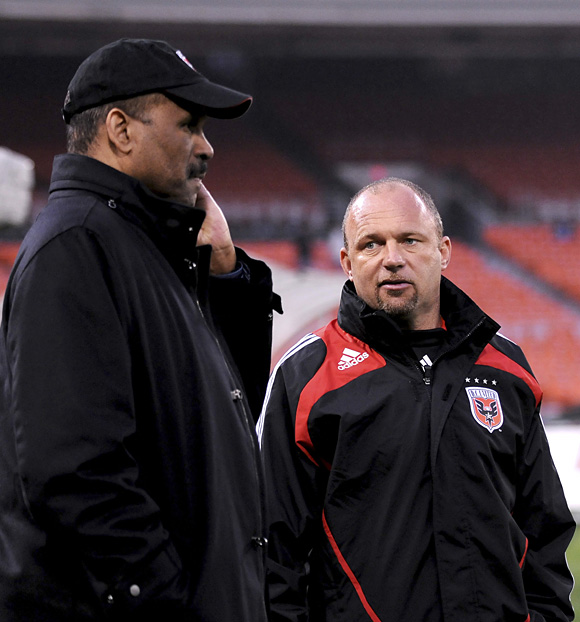 At the MLS Super Draft this year, DC United had about seven or eight people around the draft table.  I think the rules state a team can only have four but when the team owners tell the league they want in, well you know. To say there is pressure on Tom Soehn and his staff is an understatement.  I think the owners, pen and paper in hand, wanted to "help out" as well as discover who was making the personnel decisions and why things did not go so well last year.

At one point during the selection process, DC was up with one of their first-round picks.  Each team gets a few minutes to choose ("DC United is on the clock"), and if a decision cannot be made you can take a time out.  Well the DC dozen compared notes, discussion ensued and we couldn't help looking over in wonderment as the first round picks are usually the easiest because the coaching staff maps out the entire round.  If this guy goes, we take this guy, if this guy is available we grab him, if not we take this guy, etc. United took nearly all the three minutes and finally chose Chris Pontius — great pick — and then were on the clock again as they had the next pick.  So I was thinking they have this one set up, easy money, make the pick and let's get on with it. Everyone in the room is thinking the same thing — "Take the Cal keeper, Stefan Frei, because you need a goalie."

Well. the director of player personnel, the owners, all four of the coaching staff, started the discussion again. After three minutes, they couldn't make a decision and called a five minute time out! Cue jeers, laughing and boos from the other tables.  DC didn't take Frei, I think they took Rodney Wallace.  Looking over at the table we couldn't help but feel for Tom Soehn and his staff — owners sitting behind him, looking over his shoulder, as if they actually knew something about soccer.  If you don't trust the coach and his staff, make the change — otherwise, get out of the locker room.

With or without owner input, this is what Soehn will probably trot out against the New England Revolution Friday night: Crayton in goal, Namoff, Jakovic central and Marc Burch on the left in defense.  In the midfield Clyde Simms will hold and Ben Olsen will join him as a tandem if he is healthy — otherwise, we might see Palo Alto product Andrew Jacobson.  Wide, DC uses Rodney Wallace and Fred.  Christian Gomez is the play maker and sits just underneath the strikers.  To round out the 3-5-2, United have Emilio and Chris Pontius up top.  Soehn's options include Santino Quaranta wide for Wallace and new signing Ange N'Silu up top. Pontius can also play in a wide position for Fred.

Stevie Nicol's boys have had two weeks off and should be ready to get three points at RFK.  Not easy to do, but here is his eleven. In goal, Matt Reis should be ready to play as he was on the sub's bench in the last match. On the other hand, the new kid, Brad Knighton, is undefeated — do you make the change?  I wouldn't. Chris Albright, Darrius Barnes, Jay Heaps, and Chris Tierney make up the back four.  Steve Nicol has played with four in defense this year — the team misses Michael Parkhurst — but I think he prefers a 3-5-2 given the choice. In the last match, Steve Ralston replaced Tierney to make it a 3-5-2 and I would think Nicol may go with this from the start. Jeff Larentowicz sits in the middle, allowing Shalrie Joseph to probe forward. Wells Thompson and Sainey Nyassi are the wide players.  Up top, New England uses Kenny Mansally and Kheli Dube.

The way I see it, New England is the better team and can come out of this one with three points if they can expose DC United's back line, which is a bit wooden.  The Revs have speed to burn but lack quality around the box unless Taylor Twellman is in there.  Steve Ralston's presence helps immensely and could be the difference.  It seems that as he gets older, flirts with retirement, he just seems to get better. United likes to put a lot of bodies in the middle of the park to clog things up, making it difficult to play. DC keeper Louis Crayton is poor and New England would be well advised to test him as often as possible.

DC United really only has one or two players that would start for the Revolution, which is sometimes how I judge a team.  Emilio up top seems to be finding form and is very dangerous around the box with either foot.  He could start for the Revs as could a fit Christian Gomez.  Gomez seems to be unable to free himself from close marking and it is clearly affecting his side's game.  Teammates want to and need to get him the ball but he is not available enough.  H still has quality though and can still turn a match via a superb pass or from a set piece.  I really like DC's Chris Pontius.  He plays the game right, works his tail off and is going to be someone to watch in the years to come.  Oh, and I figured out what Fred does during a match.  He kicks people. That is it.  Really.

This match  should be fun to watch.  DC United, lacking in quality on the pitch, will try to stifle and slow down the Revolution by any means.  New England will try to play but will air it out more often than not. Could be a little run and gun but could also spell three points for the Revs.

(Tim Hanley played for the NASL Earthquakes and has won three MLS Cups as an assistant coach in San Jose and Houston. He is currently an assistant coach with the Dynamo. Tim's opinions are his own and do not necessarily reflect those of the Houston Dynamo, Major League Soccer, his eighth-grade English teacher, or Phobos and Deimos, the two oblong moons orbiting Mars.)