Blanco comes off the bench to beat San Jose, 2-0

Share All sharing options for: Blanco comes off the bench to beat San Jose, 2-0 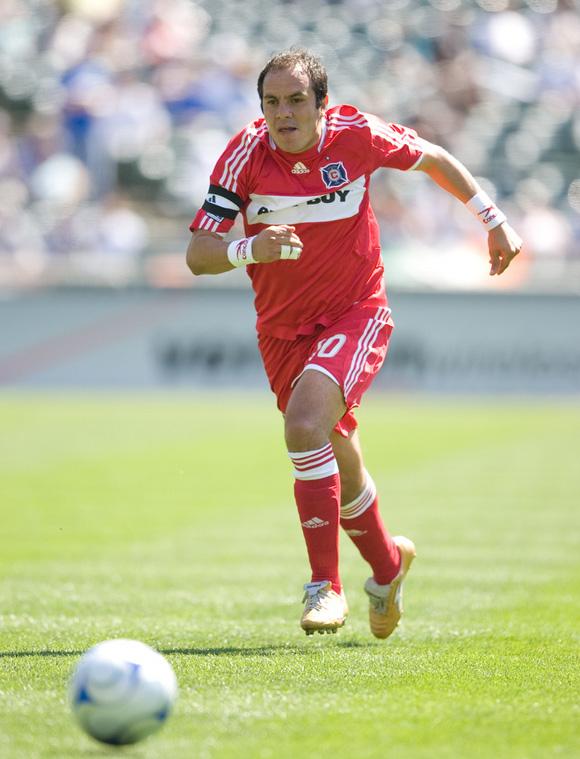 Cuauhtémoc Blanco of the Fire had a goal and an assist against San Jose. Photo: John Todd, centerlinesoccer.com, isiphotos.com.

Cuauhtemoc Blanco came off the bench to lead the Chicago Fire past the San Jose Earthquakes 2-0 in a very physical match Saturday night at Toyota Park.

Blanco entered the game at the hour mark and assisted on a Patrick Nyarko goal in the 82nd minute before capping his night with a goal in stoppage time to put Chicago back atop the MLS East with a 7-3-7 record.

San Jose showed a lot more grit than the side that “crumbled” in their previous match, but had no answer for the Mexican international. “I feel that we did enough to get something out of the game tonight,” coach Frank Yallop said. “We defended well for the majority of the match and we created some good chances, especially in the second half. We had 20 seconds of bad defending and we lose the game.”

The Earthquakes’ winless streak away from home now stands at 18 games, and they sit at the bottom of the MLS West with a 3-10-4 mark.

Coach Yallop promised some changes after his team’s dismal performance against Toronto last week, and the San Jose starting eleven featured two new faces. With Pablo Campos traded to Salt Lake, Chris Wondolowski got the start at forward, while Brandon McDonald dropped to the backline to replace the injured Aaron Pitchkolan, making room for Antonio Ribeiro in midfield.

Chicago had problems of their own to deal with. The Fire came into the match winless in their last 6 home games (two losses, four ties), and had just learned that team leading scorer Brian McBride would be out for at least 3 months with shoulder surgery. Gonzalo Segares (Costa Rica) and Logan Pause (USA) were also missing; those players were called away to National Team duty for the Gold Cup. Fire coach Denis Hamlet inserted Patrick Nyarko up top, while Mike Banner took Cuauhtemoc Blanco’s spot in midfield, playing alongside Peter Lowry, a 2008 2nd round draft pick out of Santa Clara making his MLS debut.

The Earthquakes came out determined to show some intensity early. Jason Hernandez earned a yellow card in the 3rd minute for a tackle on Mike Banner, and Chris Wondolowski was booked two minutes later for dissent.

Chicago’s Bakary Soumare responded with a hard tackle on Darren Huckerby in the 17th minute, picking up a yellow card of his own.

On the offensive side, the Earthquakes pushed numbers forward throughout the first half, but didn’t do much to bother Chicago goalkeeper Jon Busch. A 16th minute corner kick from Darren Huckerby found Chris Wondolowski open near the penalty spot, but his weak volley only bounced to Arturo Alvarez. Alvarez tried to nod it on goal from six yards out, but missed high.

In the 18th minute, Antonio Ribeiro pulled down a poor clearance, and after a neat flick over Mike Banner, tried a left footed shot from top of the arc that dribbled wide right.

Frank Yallop liked how his team look in the opening half hour. “Commitment, execution, desire, all those thing we talked about are there,” Yallop said. “Performance wise, it’s very encouraging. We just need that that final last ball that’s not there right now.”

Chicago’s best first half chance came in the 13th minute, when Mike Banner got on the end of a Thorrington cross from right midfield. His diving header from 15 yards forced San Jose goalkeeper Joe Cannon to dive to his left to push it wide.

The Fire thought they deserved a penalty kick in the 32nd minute, after Justin Mapp cut inside from the right wing and fell over a sliding Mike Zaher just inside the penalty area, but referee Jasen Anno waved play on. .

San Jose came out strong in the second half. In the 47th minute, Huckerby and Wondolowski worked a give and go, Huckerby receiving the return pass just inside the penalty area for a quick shot. Jon Busch got down to make the save.

In the 55th minute, Arturo Alvarez fed Antonio Ribeiro at the top of the arc for an open shot, but Ribeiro missed wide right from 25 yards.

At the hour mark, Chicago brought on Cuauhtemoc Blanco for Peter Lowry, and Marco Pappa  for Mike Banner, igniting the Fire offense. On the re-start, Blanco took a throw in, spun around Mike Zaher, and from tight angle on the right side flicked a shot to the far post that Joe Cannon stretched to knock away.

On the ensuing corner kick, Blanco tried for an Olympic goal with a curling effort that had Cannon backpedaling to punch it over the bar.

San Jose kept pushing forward. In the 69th minute, Darren Huckerby released Ryan Johnson down left side with a well weighted chip. As Johnson came in on goal, Jon Busch came off his line to challenge him, and blocked Johnson’s left footed effort.

Less then a minute later, Arturo Alvarez found Huckerby with space down the right side. Huckerby fired a 15 yarder that Busch punched away.

“We had some great chances in the second half,” Ryan Johnson said. “I had a breakaway and the goalkeeper made a good save on me. We just need to finish games like this better.”

The Earthquakes brought on Cornell Glen in the 74th minute for Ryan Johnson, while Bobby Convey replaced Antonio Ribeiro.

In the 78th minute it was San Jose’s turn to appeal for a penalty, and it looked like they had a good case. Cornell Glen took a pass from Alvarez just inside the penalty area and got dragged down by Bakary Soumare, but no foul was called.

In the game’s final 10 minutes, it was time for Cuauhtemoc Blanco to shine. His 80th minute free kick from 25 yards missed a foot wide of the right post, but Blanco soon helped Chicago get on the scoreboard.

In the 82nd minute, Blanco lofted a pass from the right midfield to Patrick Nyarko racing into the penalty area. Joe Cannon had no chance to stop Nyarko’s volley from six yards out.

Searching for the equalizer, San Jose had Quincy Amarikwa replace Chris Wondolowski in the 84th minute. Chicago countered by replacing winger Justin Mapp with MLS All-Star defender Wilman Conde, and were well on their way to killing off the game when they took advantage of a late Earthquakes mistake to double their lead.

Two minutes into stoppage time, as San Jose tried to work out of their own end, Simon Elliott gave the ball away to Wilman Conde. Conde fed Blanco at the top of the penalty area, and Blanco chipped a shot just beyond Joe Cannon’s outstretched arm and under the crossbar for his fourth goal of the season.

“We had good shape and were not giving them too much, but then we had two breakdowns that cost us,” Yallop said. “That has been our undoing this year. Our effort was good, but it is still a 2-0 loss and that is not good enough.”

“This team has not given up,” Ryan Johnson said. “We played better tonight and now we have four home games coming up. We need to win some games and keep on fighting.”