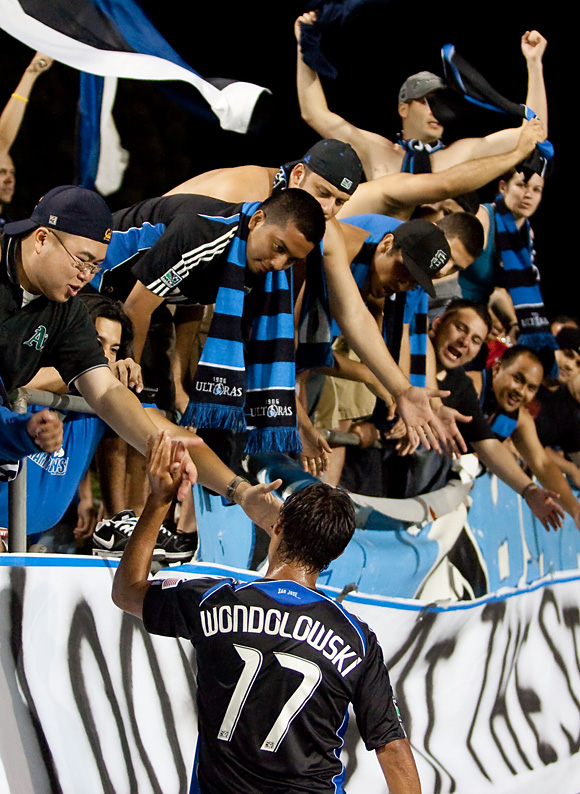 The Earthquakes players left the field after another preseason training session at Oakland Coliseum sweating a bit despite the brisk temperature. One player in particular was also sporting a big smile as he walked over to the sideline — birthday boy Chris Wondolowski. A day after signing a new contract with the team, Wondo, as he is affectionately known by fans and teammates alike, was happy to have his status with San Jose cleared up before the start of the new season. “I love San Jose” said the Danville native.  “I grew up a big fan of the Earthquakes, and I was originally drafted by them. So, I love being here, and I look forward to staying here.”

Wondolowski departed for Texas, when the old Earthquakes were relocated to Houston after the 2005 season and renamed the Dynamo. He played sporadically over 3 and a half seasons in Houson, where he scored 7 goals in all competitions. His homecoming to the Bay Area was made possible last summer in a trade with the Dynamo that saw the departure of forward Cam Weaver. Wondolowski went on to make 14 appearances with the Earthquakes, scoring 3 goals — none more important than his stoppage-time winner against Kansas City that he called his most memorable on-field moment of 2009. Having that score come in front of the Buck Shaw faithful made it even more special. “We have tremendous fans in San Jose, they mean so much. They definitely push us on through thick and thin.”  Especially in tight games, Wondo and his teammates take inspiration from the energy of the crowd. “The guys in the locker room really appreciate that. It is a great feeling to play in front of our supporters.”

While the terms of his new contract with the Quakes have not been made available, Wondolowski is pleased with the security the new deal provides for him. Looking forward, he admits the task is to improve upon his limited appearances with the Quakes in 2009. “I’m always motivated (to get more playing time). I want to make it hard on the coaches to decide who goes in. When I do get my opportunity I want to make the most of it.”

Wondolowski will be competing for playing time with forwards Cornell Glen, Ryan Johnson, Arturo Alvarez, and Quincy Amarikwa — along with potential signing Eduardo. In an effort to build depth on the team, General Manager John Doyle was more than happy to bring back the 27 year old. “We are happy to sign Chris to a new contract,” said Doyle. “He is a hard-worker who played well for us last year after we acquired him. He gives us a lot of options because of his versatility and he is a good finisher.”

Despite the club finishing at the bottom of the Western Conference standings last season, Wondolowski senses that better times are ahead. “We started to hit our stride at the end of last season, maybe a little too late,” he remarked.  “But the camaraderie in the locker room was great; the guys that we have I feel are the right guys. And the few guys that we did add in are going to make a difference.”

The start to the 2010 regular season schedule doesn’t do the Earthquakes any favors, with their season opener against Real Salt Lake, the defending MLS Cup Champions. However, that doesn’t deter the young forward, and he pledges to be ready for the March 27 game at Buck Shaw Stadium. “Absolutely. Not only is it the first game of the season, but we get to test ourselves against the best team of last year. I think it is going to be a great game and I am certainly looking forward to it.”