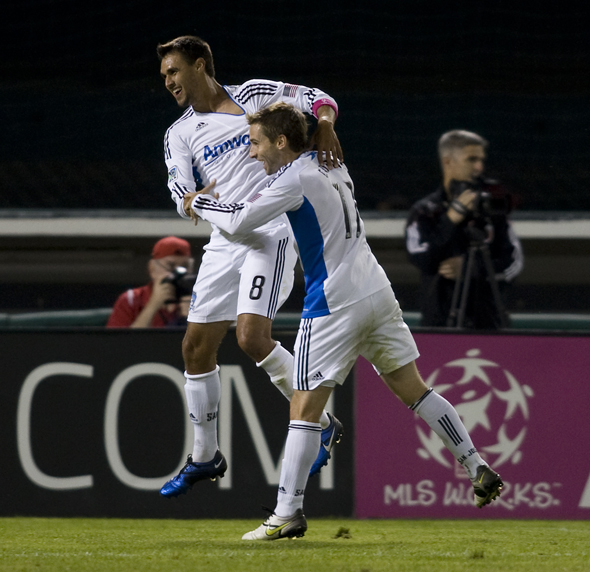 What many tabbed as a mere formality weeks ago finally became official Saturday night — the San Jose Earthquakes have qualified for the 2010 MLS Cup playoffs. After earning a hard fought 2-0 victory at DC United earlier in the evening behind two goals from the team’s leading scorer Chris Wondolowski, a trip to the postseason was secured when the Kansas City Wizards dropped a tight contest at home to the Seattle Sounders 2-1. The Quakes win coupled with the Wizards loss means that San Jose can finish no worse than eighth in the combination MLS standings.

“It is huge,” shared Wondolowski after hearing of the result in Kansas City. “Once we make the playoffs, anything can happen, and we are playing very well right now. We will see who we end up having to play, we will bring our game and we will see what happens. We aren’t done here though, I want a ring.”

Behind the two goals from Wondolowski — his 13th and 14th of the season — and some expert defending by a backline that lost Brandon McDonald to a red card in the eighth minute, the Earthquakes continued their impressive road record with the win. Improving to 6-4-4 away from Buck Shaw Stadium, the Quakes now have more points on the road than over the past two seasons combined. In fact, with three games remaining in the season, the team actually has more points on the road than at home — the only playoff bound club in MLS to achieve that.

Wondolowski has deservedly garnered most of the accolades for the 2-0 victory, and his finishing skill was on display as he scored one goal each off volleys from first his right foot, than his left, but the efforts of the defensive four kept the Quakes in the game until that first Wondo goal in the 45th minute. A McDonald goal line clearance in the opening minutes and a Tim Ward clearance 10 minutes later preserved the scoreless tie over a stretch where DC United were applying heavy pressure in the San Jose half. In fact, until that Wondo goal, the Quakes had only one shot the entire half.

The second half was more even in the early stages, but it was the Quakes who found the back of the net again, this time off a corner kick in the 55th minute. A short corner to Bobby Convey gave him ample space to send a floating cross into the box that forced United goalkeeper Troy Perkins into a punch save out of a congested mix of players from both teams. Unfortunately for DC, the ball only made it as far as Wondolowski’s left boot, and he blasted a well struck ball inside the near post to double the Earthquakes advantage.

“First goal, it was a great ball by Tim Ward, and I made a little run to the back post, it came to me and I was able to just bang it home,” described Wondolowski. “The second goal, Bobby Convey served in a good ball, I believe Troy Perkins got a little tip on it, and it came to me at the back post again. That one I didn’t really strike it that well, but it found the corner, and I’m pretty excited about it.”

The wind clearly had left the sails of the home side at this point, but they valiantly soldiered on in search of a goal. With veteran forward Jaime Moreno also dismissed for a red card in the same incident that saw McDonald get his marching orders, United was left to rely on a rather ineffective Pablo Hernandez to lead their offensive efforts. A late game clear chance for Hernandez was as close as the Black-and-Red would get, but Ward was there to break up the play deep in the Quakes area before he could get off a shot.

As the closing stages of the game played out, the Earthquakes repeatedly threatened on the counterattack, but a series of unfortunate touches and emergency defending from DC United, kept the game at 2-0. The home side did little themselves to show they had any intention of scoring, and the game ended with Wondo’s brace being the difference.

The final whistle also marked the Quakes twelfth clean sheet of the 2010 campaign — which is tied for the most in franchise history with that of the 2005 team — and the sixth of the season for goalkeeper Jon Busch. The 2-0 shutout was well deserved, and was indicative of the team’s renewed focus this season on a defensive first approach to their tactical game plans. Staying resolute in the defending half, while finding opportunities to score with a well organized counterattack, has been a key reason for the Quakes qualifying for the MLS playoffs since the team returned to the league in 2008.

For Busch, the defensive effort was what he expects every game, and from all the players that play the backline in front of him.

“I have never seen someone like Jason Hernandez block so many shots, he has been tremendous,” said the triumphant Earthquakes goalkeeper. “(Chris) Leitch had a great game tonight, and Timmy (Tim Ward) has been solid since he came over from Chicago. It’s a total team effort and everyone has each other’s backs.”

Coach Frank Yallop, when asked about the postseason after being told of the Kansas City loss succinctly summed up the Earthquakes attitude.

“We are very pleased to be where we are, and we know that there is still a job ahead of us,” said Yallop. “This team has done very well this season and we are all very happy with what we have been able to accomplish.”

With three games remaining in the regular season, all that is left for the Earthquakes is to play for their playoff seeding. With a chance to finish as high as third in the Western Conference, the first match of the first round home-and-home series will be held at Buck Shaw Stadium the weekend of October 30. While their opponent is still unknown — and may not be settled until the final game of the season — playoff soccer is finally retuning to San Jose.