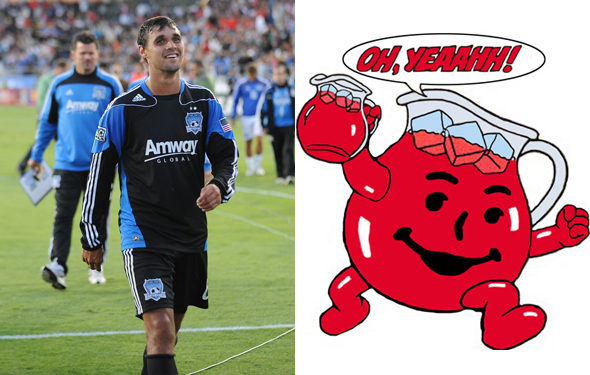 A busy week for the San Jose Earthquakes concludes later this afternoon with an important match against the Columbus Crew. Kick-off is scheduled for 4:30 p.m. here on the west coast, with television coverage available only through MLS Direct Kick or on-line at MatchDay Live. And as always, you can hear the voice of the Quakes, John Shrader, on KDOW 1220 AM — Goal, Goal, Goooooalllll, San Jose!

The Earthquakes will be looking to bounce back from the disappointing — and I’m being generous by saying that — 3-0 midweek loss to the Chicago Fire. With such a short time between games, expect some changes to the starting XI, perhaps even a start for Eduardo. Alongside Geovanni, the two Brazilians work very well together when they are on the field. Of course, man-of-the-moment Chris Wondolowski will also be trying to add to his team leading 12 goals against the Crew. I’ll admit that I have been drinking the Kool-aid on the possibility of Wondo being in the MLS MVP discussion — it’s just so darn delicious — and I’m joined by a couple of guys in the know, Earthquakes writer Geoff Lepper and MLSsoccer.com’s own Jonah Freedman.

We start off with a pair of previews for tonight’s match in Columbus, the first from Center Line Soccer’s own Giovanni Albenese Jr. over at his other gig as he goes head-to-head with a reporter of the Crew. The second article is a more generic, but still informative, look at the match-up comes from those elegant scribes at the AP.

For the true nuts and bolts of both sides, a pair of excellent newspaper beat reporters must be acknowledged. With the Earthquakes making a run at the post-season, Elliott Almond jettisons that pesky Stanford football beat to focus on San Jose futbol with his dispatch this morning. Speaking of dispatches, Shawn Mitchell of the Columbus Dispatch covers all things Crew at his excellent blog, including his preview of the match. Mitchell’s newspaper colleague Michael Arace takes the time to question just how confident the Crew are as the season winds down.

Back to the west coast, yours truly alongside Center Line Soccer’s photographer extraordinaire Joe Nuxoll made a guest appearance on the Earthquakes podcast this week, where we hoped to provide an independent view on the state of the Quakes. We get really, really angry… scratch that, we talk about the Quakes being really, really angry following the loss to Chicago, and what that might mean for today’s game. Joe and I had a good time on the show, and even took home a little compensation.

Important games for the Earthquakes in October have been lacking the last two seasons, but not this year. While many assume the Quakes playoff qualification is a mere formality at this point, a look at the MLS table reveals that making the post season is not certain: 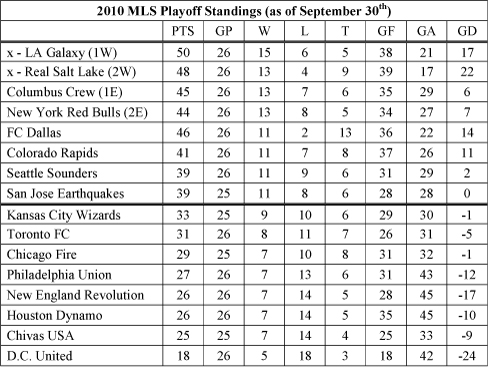 While the game in Columbus is where the San Jose players' focus will be, we can follow the other important games of the weekend as their results will help clarify the playoff qualification picture. Three Saturday matches hold significance for the Earthquakes, and are as follows:

Toronto FC at Seattle Sounders FC — TFC needs to earn points at Qwest Field, otherwise their slim chances of playoff qualification nearly disappear. The Sounders will want to continue their good form and put more distance between themselves and the playoff pretenders.

Kansas City Wizards at New York Red Bulls — The Earthquakes will definitely have an eye on this game, as Red Bull draw or victory will take some of the pressure off their needing to gain points in Columbus. The Wizards have had trouble with the better MLS teams as of late, but New York will want maximum points as they chase the Eastern Conference top seed and maybe even the Supporters Shield.

Chicago Fire at FC Dallas — Why should the Hoops see their unbeaten streak end this weekend, especially against a Fire team playing their third match of the week. Still, nobody expected Chicago to beat the Quakes either. Dallas will not capitulate as did San Jose, and should earn the win comfortably.